In the spirits of Halloween, SleuthSayers brings you a bloody fine tutorial, the basics of what an author needs to know about blood.

As crime writers, we often deal with blood, splatter, DNA and alleles in fiction and non-fiction. Today, we investigate a bleedin’ serious topic.

Erythrocyte is the technical name for a red blood cell. Scientists describe the shape as a biconcave disc or a toroid without a nucleus, meaning they’re vaguely shaped like a plastic kiddie pool or a fresh out-of-the-pack condom.

The cells contain the pigment hemoglobin that makes erythrocytes appear red. A cell’s primary duty is to carry oxygen from the lungs to other parts of the body and transport carbon dioxide back to the lungs where the breathing process of ‘gas exchange’ takes place.

antigen
An antigen induces an immune response stimulating the production of antibodies. Blood antigens comprise types A and B. Either one, both or neither may appear as part of our blood cells.
epitope
The specific surface features of an antigen type are called epitopes. It’s debatable which is the key and which the lock, so it may be convenient to think of matching antigens and antibodies as jigsaw puzzle tabs. For convenience, our schema employs shapes of letters A and B to represent type A and B antigens.
antibody
Triggered by an immune response, antibodies individually key to epitopes. A particular antibody locks onto the shape of an antigen (A and/or B). Antibodies explain why care is exercised when matching blood donors.

If you vampires think your honey’s blood is sweet, you have a point– the ‘A’s and ‘B’s in blood types are sugars. Moreover, under an SEM (scanning electron microscope), antigens lend red blood cells a sugary gumdrop look, quite unlike the glossy renderings we usually see.

Types A, B, and AB feature antigens on the surfaces of their cells. Notice how antibodies are ‘keyed’ to lock onto a particular type of antigen, kind of a socket. Antibodies in plasma can attack the wrong type antigens introduced into the blood stream.

Mayhap you feel it’s better to giveth than to receive. Not to be sanguine about these matters, we practice safe blood-letting. To help take the ‘ick’ out of ichor, following is a convenient Béla Lugosi table of tasty platelets for those special moments.


This explains why blood donations are carefully matched. A person with, say, type B antibodies in the plasma can’t mix blood with type B antigens (blood type B or AB): Only type A or O will serve. For practical purposes, a type O donor can give blood to everyone.

Contrarily, an AB- patient can receive from nearly anyone. Because of AB antigens, an AB donor can give blood only to another AB recipient.

Famously, Mr. Spock exhibited faintly green skin, purportedly because Vulcan blood flowed with copper-based hemocyanin rather than iron-based hemoglobin. Beyond Star Trek, other blood colors can be found. In fact, you’ve likely eaten some of them.

Creature copper carriers include shrimp, lobsters, certain crabs, some snails, crayfish, and squid. Octopuses are known for their copper-protein blood, albeit blue rather than green.

The New Guinea skink bleeds green, not because of copper, but because of staggering levels of biliverdin and bilirubin. The ocellated icefish, with neither iron or copper, carries clear blood in its veins.

Two other hypotheses about royal blue bloods prove difficult to verify. One suggestion premised that royalty often suffered from hæmophilia, rendering the skin and veins even paler. A somewhat more intriguing idea set forth the notion that a lifetime of exposure to silver serving dishes, wine cups, and table utensils, may have given the skin a pale blue cast. 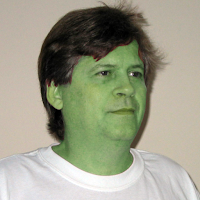 [On a personal note, during school breaks in my teens, I experienced considerable exposure to copper. During those summers, I literally sweated green. Notice the pointy ears? The Frankenstein flair?]

Now this is an interesting and informative blob to wake up to. Well done. A good lesson.

Ah, lunch!
Loved it. I'm O negative, but I also have thalassemia (minor), which means that no one wants my blood because the test shows me as anemic. Between that and my garlic intake, I'm relatively safe from vampires.
I did know a lady who tried the collodial silver. She didn't turn as gray as some of the pictures I've seen, but it didn't do anything for her blood.

Eve, I read one article that referred to silver as a 'natural antibiotic', that it helped prevent food spoiling so rapidly without refrigeration. I've not heard that before or seen studies but if true, in ancient times as now, wealth meant health.

A former boyfriend, now deceased, was of the Lutheran blood group. His family came from Wales. Before I knew him he had gallbladder surgery & was transfused some type O blood & said he never felt right afterwards.

Hi Elizabeth. A lot about blood and antigens we don't understand. I wonder what made the difference? Type O is the oldest and from an antigen standpoint, the cleanest. You might find tomorrow's timeline interesting.