We return to the spell-binding basics of blood for mystery writers and readers.The previous article carried a simplistic table for matching blood donors:


That’s mostly accurate except the Rhesus factor isn’t taken into consideration. No donor with Rhesus positive blood can donate to an Rh negative recipient. This accounts for the gap in the upper right quadrant of the expanded table below:

The Story of O

O represents the German ohne, meaning omitted or zero antigens. Some regions and countries code the O as a 0 (zero) or ∅ (null). Students familiar with binary recognize this as a 2-bit situation with four values. Russia and a few other countries label O, A, B, AB blood types as I, II, III, IIII.

Type O negative has been called the universal donor, although the reality is a bit more intricate. Type AB positive people might be considered universal recipients.

Scientists have worked out a method of stripping A and B antigens from other blood types to create an artificial type O. The Rhesus factor still remains, so Rh- donations are sought allowing transfusions to any blood type.

But what, exactly, is the Rhesus factor? And what happens when man meets woman?

Rhesus Thesis– The Dark Side of Blood

The Rh blood group system (including the Rh factor) is one of thirty-five current human blood typing systems, the most important blood group system after ABO. At present, the Rh system defines fifty blood-group antigens, among which the five antigens C, c, E, e, and especially D are considered the most significant. Commonly used terms Rh factor, Rh-positive and Rh-negative refer solely to the D antigen. In summarizing the Rh factor,
Besides its role in blood transfusion, a prenatal blood test can determine blood type of a fetus. As a result, Rh blood grouping determines the risk of hemolytic disease of newborns (erythroblastosis fetalis), emphasizing prevention where possible. 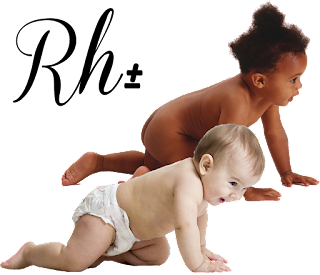 When the mother is Rh-negative and the father is Rh-positive, the fetus can inherit the Rh factor from the father, making the fetus Rh+ too. Problems can arise when the fetus’s blood has the Rh+ factor and the mother’s blood does not.

An Rh- mother may develop antibodies to her Rh+ baby, not uncommon if dribbles of the baby’s blood mixes with the mother's. The mother's body may respond as if it were allergic to the baby. The mother's body may make antibodies to the Rh antigens in the baby’s blood. This means the mother becomes sensitized. At that point, her antibodies may cross the placenta and impact the baby. Such an attack breaks down the fetus’ red blood cells, creating hemolytic anemia, a low red blood cell count. Severe cases cause illness, brain damage, or even death in a fetus or newborn. Allergen sensitization may occur any time fetus blood combines with the mother’s. Usually an Rh- mother miscarries an Rh+ fetus.


Most of us have offspring without thinking about such a subject, but problems do occur. When I was ten, a classmate’s family had struggled to have another child. They were devastated when attempts ended in perinatal deaths. We kids were saddened for our classmate, a boy we’d never before seen cry. At the time, we were told the problem was one of blood incompatibility. While we children weren’t privy to the particulars, something like the following probably occurred.

When an Rh- mother becomes pregnant with a Rh+ child, the mother’s immune system produces antibodies that attack the fetus’ red blood cells. A first child usually survives because the antibodies don’t appear until late in the pregnancy. However, in subsequent Rh+ pregnancies, antibodies are already in place. Even with extreme intervention, these children can die.


For example, if Colonel D’Arcy is type A and Miss Annabelle Lee is type O and Baby Willie turns out type B… uh-oh. Oo-la-la as they say in N’Orleans, the colonel’s not the father he thought he was. A new tale is born.

The type O bloodline was the original, dating back at least 200 000 years and likely two-million or more in ancestral primate lines. One theory suggest other blood types began to diverge as diet changed. Type AB arrived quite recently, only ten centuries ago, although a few researchers suggest an approximate AB date of 1000bc instead of 1000ad.

Alas, it was all in vein.


Have a safe Halloween!
Posted by Leigh Lundin at 00:00