by Libby Cudmore
I came of age as a writer in a brief and beautiful era of crime writing—fiction, cinema and television—during the terror that was the Bush years and the War in Iraq.  Many of the films are considered modern classics, Inside Man and Children of Men, The Departed and Kiss Kiss Bang Bang. But the one I continually come back to, from the soundtrack  on my laptop to the print hanging over my desk as I write this, is Sin City. 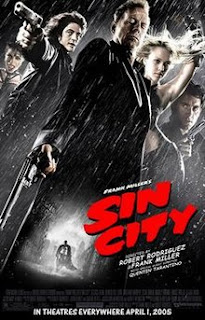 When Sin City hit theaters in April 2005, I saw it four times—with my now-husband Ian, with two sets of friends, and with my mentor. I dreamed in black and white. I narrated ordinary actions in my head with a noir patter. My annual birthday costume bash had a Sin City theme, all the girls in fishnets and red, all the boys in leather and black. It meshed well with the Raymond Chandler novels I was reading and the Asylum-era Tom Waits records I was listening to.

And when all that had settled, I wrote.

My best friend Jason and I collaborated on a series of gritty short stories, drawing out maps on diner placemats when we got finished with our crummy post-college jobs. We would quote the movie to each other, watch it over and over on nights too hot in broken apartments to do anything else. From London he signed his letters The fire, baby. He was the Dwight to my Gail, but more importantly, he and I could live in a gritty little world of our own making. We went to Hard Case Crime readings. We developed a patter that made it into our daily conversations.

The book never got published, and Jason and I lost touch in summer 2007.  I retooled as many of the stories as I could and sold them piecemeal to different crime fiction mags and journals; a few of them might still be around if you want to go looking. One of those stories got me into grad school. I tried to sell the collection, but nobody wanted it. I wrote a second book based on one of the stories in there, but no one wanted that one either.

And seven years later, when A Dame to Kill For came out, Jason called. We reconciled old hurts. We watched the new movie together, long-distance, and mocked how bad it was. It was a homecoming of sorts.

The print above my desk is from the comic “The Hard Goodbye,” three bold BANGs as Marv kills the priest. “Worth killing for. Worth dying for. Worth going to hell for. Amen.” It’s stark and it’s striking and always reminds me where I came from, like an old family photograph.

If you haven’t watched it in awhile, find it on Netflix and give it a go. It ages surprisingly well; the performances are spectacular and Clive Owen is stupid-handsome. Sure, it's got a lot of pastiche, and maybe the treatment of women isn't great. It's a sad reminder that we have lost Brittany Murphy and Michael Clarke Duncan. But it still lights that fire inside me, a reminder of why I do what I do. 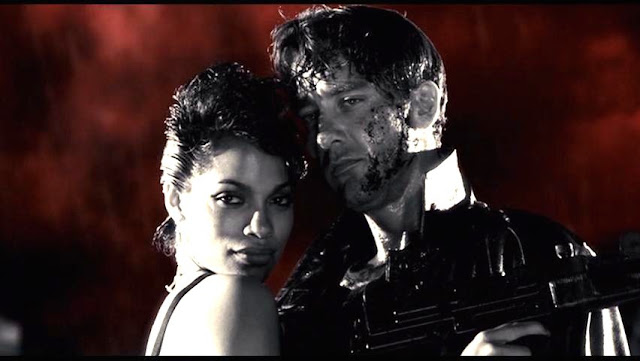