In 1922, a short story titled "In a Grove" by Ryunosuke Akutagawa was published in the January edition of the Japanese monthly, Shincho. This short story tells a tale about the rape of a samurai's wife and the subsequent murder of that samurai from the point of view of several different characters, and with contradictory information from one character to the next.

Twenty-eight years later, movie director Akira, Kurosawa (famous director of The Seven Samurai) used Akutagawa's short story as the basis to make his 1950 film, Rashomon. Similar to the short story, Rashomon is a tale told by four witnesses to a rape and murder: the bandit, the samurai's wife, the murdered samurai who tells his part through a medium, and a woodcutter who appears to have no bias in his telling. All of the witnesses seem to agree on some facts, but disagree on others. These disagreements on the same incident though, may be subjective, self-serving or due to the ego of that witness. Because of the contradictions in the stories of each witness, the actors in this film asked the director which version was the truth. Kurosawa replied that his film was meant to explore multiple realities rather than just one truth. 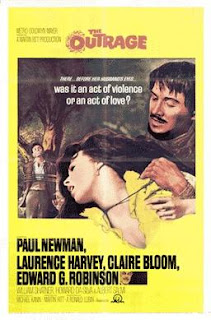 Then along comes Martin Ritt, who remakes the Japanese Rashomon into a 1964 American western titled The Outrage. Paul Newman is cast in the role of the bandit Juan Carrasco, William Shatner as a disillusioned preacher, Howard Da Silva as an unsuccessful prospector, Edward G. Robinson as a cynical conman. and Paul Fix as an old Indian shaman. Laurence Harvey plays an aristocratic Southerner married to Nina, who is played by Claire Bloom. At the bandit's trial, Juan (Paul Newman) claims he killed the husband (the Southerner) in a duel. The wife claims she stabbed her husband to death because he blamed her for encouraging the bandit, which led to the rape, while the dead husband (through the old Indian shaman) claimed he committed suicide as the manner of his death. The prospector has a fourth version for the trial.

In later years, television and movies used The Rashomon Effect to reveal "the truth" in the final version of some of their stories, which put a neat and tidy ending on those Hollywood's stories. However, in real life, a Rashomon effect is more like what cops deal with on the street whenever an incident happens, especially one that involves the emotions or prejudices of the witnesses. By the time interviews start with an incident involving law enforcement, the recollection of the events and timeline, descriptions of perpetrators and vehicles, types of guns or if there actually were any guns and/or the type and color of clothing worn by alleged suspects can vary quite a bit.

For our purposes as writers, The Rashomon Effect may be defined as a story told by several witnesses or alleged witnesses to the same incident. Each story as told by a separate witness and from their Point of View, will have some of the facts straight, but their story may also be colored or influenced by their personal biases, opinions, or even flavored to benefit themselves or others. Each witness story will contradict some of the alleged facts in the stories of other witnesses. The final version may be "the truth." Or not.

Curiosity led me to research The Roshomon Effect. And now that I have, I'm intrigued enough with the process to attempt a short story using that method. I already have the main characters and a skeleton plot mapped out. Now, I merely need to write my six-part story and see if all the contradictory parts fit.

But then, it's always something, isn't it?

And now for a little Blatant Self-Promotion: 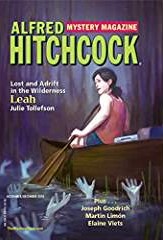 The November/December 2018 issue of Alfred Hitchcock Mystery Magazine has my story, "Vet's Day," 11th in my Holiday Burglars series. As with many of the titles in this series, I like putting double meanings into the title. In this episode, Beaumont finds himself compelled to do a favor for his old Army First Sergeant who once had Beaumont running an off-the-books NCO Club in a Muslim country in exchange for an early out from the military. Due to a lack of personal funds, Beaumont figures the only way he can complete the favor now asked by his old sergeant is for him to commit a strange burglary. And, in order to talk his partner Yarnell into going along with him on this job, Beaumont must agree to something that Yarnell wants in return.