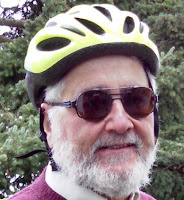 Oh, and one last trick or treat.  What do these two book covers have to do with Halloween?  Answer will be in the comments.
Posted by Robert Lopresti at 00:00