Keeping You in Suspense 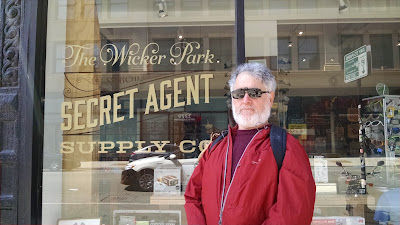 I was thinking recently about suspense and the fact that many people these days seem to use the terms "suspense fiction" and "mystery fiction" interchangeably.  There is an overlap, but they are not identical.

I think we can all take a swing at defining mystery, but what is suspense fiction, exactly?

Alfred Hitchcock, the Master of Suspense, famously differentiated between surprise and suspense.  If two men are sitting at a table and a bomb goes off under it, we are surprised.  But if we see the bomb beforehand and hear it ticking as the men sit casually talking about the weather -- that's suspense.

Worldcat defines suspense fiction as "works whose prime purpose is to produce a feeling of frightened anticipation."  While any author of stories or novels wants the reader to feel impelled to keep reading, with suspense fiction that nervous urge is the main - or at least a main - goal.

As I said, though, not all crime fiction is focused on suspense.  But does all suspense fiction involve crime?

A few years ago I asked on Facebook and again on the Short Mystery Fiction Society e-list for suggestions of great suspense short stories that do not involve crime.  It led to some interesting discussions.  First of all, I received a lot of suggestions that were not short stories: novels, plays, and even a poem.  ("Casey at the Bat" certainly is suspenseful, although it doesn't have that "frightened" aspect Worldcat mentions.)

But about half of the actual stories that were suggested were subject to arguments.  Shirley Jackson's "The Lottery" is great suspense fiction, but is it  crime fiction?  Apparently what happens in it is legal in that community.

Ambrose Bierce's "Occurrence at Owl Creek Bridge" is a story of a man sentenced to die for sabotage during a war, but since he is a civilian, does that make it a crime rather than a war story?

Someone argued that Edgar Allan Poe's  "Murders in the Rue Morgue" qualifies and I scoffed that at first.  But I'm damned if the nominator didn't have a point.  By most definitions what occurs in the story is not a crime.*  However, since it unquestionably a detective story I am leaving it off my list.

The biggest category of non-crime suspense story I could find is people-versus-nature, which makes sense.  See, for example, Jack London's "To Build A Fire."

Another tale in that category is "The Drover's Wife," by the great Australian writer Henry Lawson.  His simple tale involves a ranch woman left alone with her young son, a dog... and, as it turns out, a very large snake.  An Australian actress named Leah Purcell has recently adapted it into a feminist novel, play, and movie, none of which I have yet encountered.

What you see below is my personal compilation of Great Suspense Stories Without Crimes.  Please add your own suggestions.

By the way, there was a great radio show called Suspense and Bob and Ray used to mock it with... Anxiety!

* Although I argue otherwise in my short story "The Street of the Dead House."

A Legend on Klickitat Street

It started in Yakima in the 1940s.  A small boy complained to a librarian that there weren't any books about kids like him.  And, of course, he was right.  Most children's books were European fairy tales or stories of upper class English children.

So the librarian decided to write a story about a boy growing up in her hometown of Portland, Oregon.

By the time that librarian, Beverly Cleary, died in March at the age of 104 her books had sold 90 million copies.  Portland has honored her by naming a school and a library children's room after her, and by placing statues of some of her characters in a park near where they (supposedly) lived.

Her first book was Henry Huggins, about a little boy who lived on Klickitat Street.  But she truly found her muse when she started writing about Ramona Quimby, the younger sister of Henry's friend Beezus (Ramona's pronunciation of Beatrice.)

It's hard to explain what makes Ramona so special because she was, well, so ordinary.  No super-powers, no daring adventures.  Just a bright kid trying to cope with everyday dilemmas and injustices.  Did her teacher think she was a nuisance?  Did another kid get credit for for her work?  And (more seriously) will her father find a new job?  Read Ramona the Pest and see how a master can turn the minutiae of a kid's life into literature.

Cleary won the Newberry Award for Dear Mr. Henshaw, which I highly recommend.  If you wanted to get all high-brow you could say it's a book about writing therapy.  It was inspired by two kids who each  asked Cleary to create a novel about divorce.  In the book sixth-grader Leigh Botts writes a letter to his favorite author full of very standard kid-to-writer questions and Mr. Henshaw responds with a snarky list of questions of his own.  That leads Leigh to begin a diary and he uses it as a way of coping with his family trauma while, at the same time, learning to write.

Moira MacDonald, who writes for the Seattle Times, decided to read (or re-read) Cleary's books after her death and came up with an interesting insight.  Cleary's young adult novels, she said, seem hopelessly old-fashioned and dated, but her children's books are fresh as springtime.

Which may mean that there's something universal about being a kid (in spite of what that blessed little boy in Yakima said).

And that reminds me.  I have been reading the Mystery Writers of America's excellent new manual How To Write A Mystery (full disclosure: I have one page in it), and Chris Grabenstein has an essay about writing for children.  He says: "[D]on't put a chalkboard in your classroom scene.  Nobody uses chalkboards anymore.  They are dusty relics.  Do try to remember how it felt to be in front of a class, unable to solve a math problem because, oops, you didn't do your homework.  The feeling is the same."

Today in Mystery History: May 5

This is the eighth in my occasional series about the history of our beloved field.  I haven't run out of days yet.

May 5, 1902.  Bret Harte died on this day.  He  was best known for his short stories about the California gold rush but in our field he is remembered for "The Stolen Cigar-Case."  No less an authority than Ellery Queen called this story "probably the best parody of Sherlock Holmes ever written." In the field of true crime, he wrote about the Wiyot Massacre, in which more than 100 Indians were slaughtered by White settlers.  Death threats followed and he had to leave the region.

May 5, 1950. This is the birthday of Susan Grafton's great character, P.I. Kinsey Milhone.  I'll bet you didn't send her a card.

May 5, 1980. The issue of Ellery Queen Mystery Magazine with this date included Edward D. Hoch's very clever "The Most Dangerous Man Alive," which was an Edgar nominee.  I still remember it.

May 5, 1992.  Kinsey Milhone celebrated her birthday with the publication of I is for Innocent.  Exactly a year later came J is for Judgment.

May 5, 2014.  Trace Evidence, the Alfred Hitchcock Mystery Magazine blog, posted "Shanks Holds The Line," which I offered to them for free as a sort of public service announcement.

May 5, 2015. Craig Faustus Buck's novel Go Down Hard was published on this day.  It's about an ex-cop trying to solve the decades old murder of a rock singer.

The Devil You Don't Know 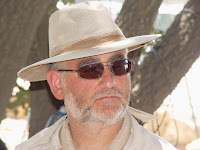 So you want to write a short story, but you can't think of an idea.  Is that what's troubling you today, Bunkie?

I have a suggestion.  Specifically, here's a writing exercise that might help you out.

I assume you read a lot of short stories.  (If you aren't reading what you want to write you are doing it wrong.)

So, the next time you are really enjoying a story, stop reading halfway through.

Painful?  You need to know what happens!  How does it end?

Good question.  So sit with it a while.  What happens next?  Is there a twist?  Does the protagonist get what she wants?  Work it out in your head.  Maybe write a paragraph or two.

Once you have decided how the plot is going to turn out, go ahead and finish reading the story.  Did you guess the ending?  If so, bravo to you for your discernment.

But if you guessed wrong - congratulations!  Now you have a story idea.

I'm not suggesting you should copy the first half of the original.  There's a name for that and it rhymes with "majorism."

But you can build on the original idea and take it in a new direction.

For example: Mensje van Keulen wrote a story called "Devil's Island," which appeared in Amsterdam Noir.  The narrator's friend can't get over his break-up with a girlfriend.  One evening in a nightclub he says "I'd sell [the devil] my soul if he'd make Martha come back to me.  And then a stranger arrives, asking for a light for his cigarette...

It's a fine story and made my best of the year  list.  But the key thing is that I thought I knew how it would end.   Turned out I was wrong.

But just because van Keulen didn't use the ending I dreamed up didn't mean it was not worth using.  So I wrote a story about an actor, sitting in a nightclub and complaining that an upcoming movie has a part that would be perfect for him, but he can't even get a try out.  "I'd sell my soul for a chance," he declares.

And up pops a helpful stranger.  "Call me Nick…"

My story, "The Fourth Circle," is in the current, May/June issue of Alfred Hitchcock Mystery Magazine.

Here's another example, which I wrote about here last year. Janice Law wrote a story called "The General," about a deposed dictator who fears he is losing the love of his son.

I guessed wrong as to where Janice was leading and that gave me the idea for "Worse Than Death," about a dictator very much in power, whose son is kidnapped.

You get the idea.  Will the exercise work for you?  Beats me.  If you try it, let me know.

Get Under the Kanopy

What I am about to tell you will probably delight a few people and annoy a lot more.  That is the risk you take in the hard-hitting world of bloggery.

I recently discovered that I have free access to Kanopy, a web-service that bills itself as "Thoughtful Entertainment."  I had known about it from my days working at the university, but I didn't realize that my public library had purchased access to it.

Hence the delight/annoyance I mentioned in the first sentence.  Some of you have access to a library that offers Kanopy.  Probably more of you don't. Sorry about that.  You can find out by clicking here.  If your library doesn't offer it you can try emailing them the suggestion.  They probably won't fine you for it.

So what does Kanopy offer?  Movies and documentaries that are not found in the usual places.  And you can watch ten a month for free.  Here are a few crime related ones I found there.

Posted by Robert Lopresti at 00:00 2 comments