XPD is a usage coined by Len Deighton, in his terrific 1981 thriller of that title, an acronym for Expedient Demise. 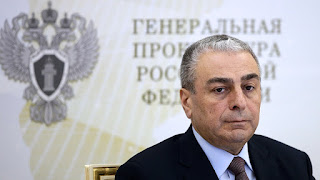 A week ago Wednesday, the Russian Prosecutor General's Office confirmed that senior deputy prosecutor Saak Karapetyan had been killed in a helicopter crash outside of Kostroma. A town on the Volga, dating back to the 12th century, if not earlier, Kostroma is one of the so-called Golden Ring cities, a favored retreat of the Grand Dukes of Moscow, the Romanovs, and Soviet nomenklatura. There are conflicting reports. Local officials said at first it was an unauthorized flight, this was contradicted by Moscow. Stanislav Mikhnov, an "experienced" pilot, apparently took off under "adverse" conditions. The third man aboard was also killed. Aviation emergency services are investigating the incident.

Russians are of course total gluttons for conspiracy theories, hidden protocols, and labyrinthine paranoia, so they're all over this one, faster than you can say Vince Foster, but maybe they know something we don't. This guy's handwriting covers a good many pages.

Saak Albertovich Karapetyan was a member of the security apparat. He made his bones in Rostov, as a state prosecutor, and after serving in parliament, he was appointed to the office of Prosecutor General. He headed the Main Directorate for International Legal Cooperation for ten years, and it was in this capacity that he ran interference on at least two major criminal investigations, the Magnitsky case and the Litvinenko poisoning.

Sergei Magnitsky was a tax auditor, representing an investment firm, Hermitage Capital. Investigating financial irregularities, Magnitsky exposed a widespread fraud, involving the police, the courts, tax agents, bankers, and the Russian mob. Although his accusations later proved out, the immediate result of his going public was his own arrest. He was held for eleven months, and died in custody, under what might be called clouded circumstances. It's a complicated story, and not least because the official Russian version is completely contrary to the known facts.

In the U.S., the eponymous Magnitsky Act was passed to allow for sanctioning individuals responsible for human rights violations. Putin has been working to overturn the Act for the past six years, and it was apparently part of the conversation with Michael Flynn and at the Trump Tower meeting with Natalia Veselnitskaya.

Veselnitskaya - wait for it - wrote the supporting brief for her then-boss, senior prosecutor Saak Karapetyan, when he stonewalled U.S. inquiries into the money-laundering case against the Russian real estate company Prevezon. Another complex financial tangle, but it leads back to the tax fraud Magnitsky blew open, and the dirty money that was never recovered.

A footnote, here. Magnitsky's boss at Hermitage, the American entrepreneur Bill Browder, has been continually targeted by the Prosecutor General's Office, through Interpol arrest warrants. Most jurisdictions seem to hold the warrants without merit. Browder was instrumental in getting the Magnitsky Act onto the books. A second footnote. Nikolai Gorokhov, a Magnitsky family lawyer who was scheduled as a witness in the Prevezon case, fell out a Moscow window before he could testify.

Alexander Litvinenko. If you're reading this, you probably know who he was. The polonium poisoning? London. 2006. Scotland Yard sent a team to Moscow, the Russians welcoming transparency and all that, but the British cops got sick - they thought somebody slipped them a Mickey - and guess who was in the room? Our senior prosecutor, Saak Karapetyan.

He more recently went out of his way to accuse the Brits of yet more Russia-bashing, in reference to the Novichok attack. Karapetyan put Sergei Skripal, Litvinenko, and Boris Berezovksy (another latterly dead Putin critic) in the same sentence, calling them provocations, which in this context means a false allegation for political gain.

The connection between Karapetyan and Veselnitskaya came out of the closet because of a blown recruitment, this past year. They've been close for a long time, Karapetyan her mentor - The Daily Beast, for one, has been using the more suggestive term handler. Anyway, the two of them had actively compromised a senior Swiss official, whose day job was monitoring the Swiss accounts of Russian oligarchs and mob guys. You notice how, more often than not, it seems to be about the money?

All of this is no more than a chain of circumstance. There's nothing to indicate Karapetyan was less than a loyal soldier, no reason to think he'd be better off dead. There is, however, a later and uncorroborated story that the helicopter pilot, Mikhnov, had two bullet holes in him. The question you have to ask is, Cui Bono - Who Benefits? I don't have a ready answer. It could simply be one of those weird juxtapositions, where the sinister meets the convenient. It could be an untidy intrigue, something domestic, a private grudge. But maybe the guy had sold his soul to the Devil, and it came time to collect.

I keep hearing the Ipcress File theme in my head.

coincidence
You weren't watching what the other hand was doing.

Well, I'm with the conspiracy theorists on this one. I don't know who did it, but I feel certain Karapetyan's accident was deliberate. Why? Who knows? Maybe he outlived his usefulness. Maybe he was a sexual predator like Lavrentiy Beria, and someone caught up with him. Maybe the third man was the really important victim. But I know in my bones that that helicopter did not go down by accident.

Sometimes a conspiracy is the only thing that makes sense.

Congratulations to all the wonderful Sleuthsayers and their work.

The remnants of the old apparat continued at a more, supposedly discreet level. Someone commented a turning point came after 9/11 when the Russia and Cuba reached out to the US and Bush slapped them away. Now we got a guy who's a Putin lapdog.

Let me offer congratulations too.