Lights, Camera, Action! My Experience in Making a Book Trailer


by Barb Goffman
I can't remember when I first met Leigh Perry. Was it at Malice Domestic or at Bouchercon? Was she promoting one of her great mystery series (yes, plural!) or one of her award-winning short stories? That I don't remember either. What I do remember is how over the nearly two decades I've known her, Leigh has proven herself to be one of the kindest, friendliest people I've met in the mystery community. She's someone who stands up for what's right, who isn't afraid of taking a risk, and who encourages others to believe in themselves. I'm proud to call her my friend, and I'm so pleased that she's guest blogging for us today on SleuthSayers. Oh, and if you're thinking the name Leigh Perry is familiar, but isn't it a pen name? Why, yes it is. You may know this wonderful author by her real name, Toni L.P. Kelner, under which she's published books and stories, too. You should check them out. And with that, I will let her take it from here.


Lights, Camera, Action! My Experience in Making a Book Trailer
by Leigh Perry


You know how in the movies, Mickey Rooney would suddenly announce, “Hey, my father has a barn! Let’s put on a show!” That’s about the same logic I used when deciding to produce a book trailer for The Skeleton Makes a Friend, my forthcoming Family Skeleton book. Only it wasn’t a barn that was available—it was an animator. My daughter Maggie has been creating artwork for book promotion for years, and she just happens to have a degree in animation. She’s mostly doing freelance work right now, so I knew I could sweet-talk her into animating a trailer for me. (I paid for her tuition to art school, and am not ashamed to take advantage of that.)


Otherwise, I probably wouldn’t have done one. I’d never done one before, and I wasn’t sure how effective they are when it comes to selling books. In fact, one author I spoke to said she didn’t think hers affected sales at all—she only did them because her fans seemed to enjoy them so. Then again, I don’t think anybody knows how effective anything is when it comes to selling books, and I like trying different things. And Maggie was willing.


The first step was for me to write a script. I decided that it should be fairly light-hearted to reflect the tone of the books. You see, I write about a walking, talking skeleton named Sid. There’s a limit to how dark-n-gritty I can get. And it needed to be short. I polled authors and publicists, and while some trailers go as long as two or three minutes, the sweet spot is 30 to 40 seconds. For the format, Maggie pointed toward the script for the animated feature The Iron Giant, and I used that as my model.


So I wrote my first script since fifth grade (when I wrote, directed, and starred in “A Visit From Mrs. Santa Claus”).


I sent the script to Maggie and after we tweaked it, she got to work on character design. Maggie had drawn Sid lots of times, but he lives with Georgia Thackery and her family, and we wanted them to look right, too. Maggie sent me a storyboard of the family: 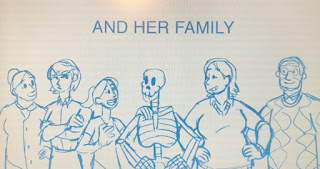 It wasn’t quite right, so Maggie and I went back and forth a few times. The end result was this: 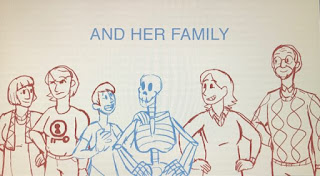 Then came discussions over the look of the family dog and other details. Once the design was set, Maggie created a kind of sketch cartoon called an animatic.


Maggie started actually animating scenes, and produced a number of drafts before I showed it to my agent, editor, and publicist to see what they thought. Though they liked the concept, they agreed that it went too fast—nobody could read the words as quickly as they appeared on screen.


Our choices were to either spend more time on each scene, which would make the trailer too long, or to trim the script. I decided to combine a couple of short scenes, and to delete the one with the burning building. That gave us more time per scene and kept it at 40 seconds total.


After a few more drafts, we had a full version we were happy with, but it was still silent. Maggie told me there were royalty-free music sites to go through to find music, and recommended https://incompetech.com/music/royalty-free/. My first reaction was panic because there were so many choices, but it turned out to be easier than I’d feared. I only listened to about six before finding the perfect one. I played “Improbable” in one window while I played the latest version of the trailer in another, and not only was the style a great fit, but the crescendo matched the “MURDER!” scene. We had a winner! Maggie added it to the trailer, and we were ready to go!


But where were we going? How and when was I going to distribute the trailer? I did another informal poll of publicists and authors, and decided to wait until October 1, which was just over a month until the release date. Then I hit social media: Facebook, Goodreads, Twitter, Instagram, YouTube. On Facebook, I made sure to post it in a bunch of different mystery-related groups, and I asked everybody to repost and retweet. I also paid for a Facebook ad to reach more people.


The reaction was gratifyingly enthusiastic. Not only did my existing readers say they enjoyed it, I got quite a few responses from people who hadn’t read the series before. My Amazon numbers improved for the week, too. Overall, I’m satisfied with the attempt.


Knowing what I know now, would I do it for another book? Honestly, I’m not sure. It was fun to work on a creative project with my daughter—Maggie said I was an excellent client. It didn’t cost much because Maggie didn’t charge me, so my only outlay was $30 to license the music and $60 for the Facebook ad. Plus Maggie has another piece for her portfolio, which helps as she seeks full-time work. (Which reminds me... Maggie is currently taking commissions for designs, logos, and other projects. You can contact her via www.dappercap.net.)


Of course, the real litmus test will be the sales figures when The Skeleton Makes a Friend comes out next week, and of course my finger-bones are crossed for that. In the meantime, let me present the finished book trailer. I hope watching it convinces you to make friends with Sid.