Between about 9 and 10 am Thursday morning, I wrote 1534 words on my current WIP. I'm not bragging because (1) I'm sure everyone else who blogs here can do the same and (2) I'll probably revise everything except the proper nouns over the next nine or ten months. That's my normal approach. But it's worth noting because while it takes me two or three months to assemble my scene list--my version of a storyboard or outline--I expect to write a scene a day, normally in less than two hours. In most of my books, the scenes average around 1500 words. For contrast, in my senior year of high school, my honors English teacher gave us eight weeks to produce a research paper of 1000 words. If we taught children to walk the way we teach students to write, the human race would crawl on all fours. 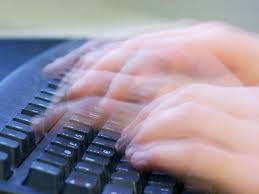 Years ago, Graham Greene produced 300 words a day. Books were shorter then. Now, the average thriller clocks in at 100,000 words or more. My own books average 83K. I plan on eight weeks (or more) to create the outline, then another six to eight for the first draft. I revise the entire text four or five times with at least a month between drafts, so my novels usually take me about 15 months.

Jodi Picault says that a writer has to learn to write on demand. When you sit down at the keyboard, desk, legal pad or clay tablet, you job is to produce words. Stephen King and Lee Child expect to produce 2000 a day. None of those authors mentions how many of those words change, but that's a separate issue.

How can writers write so quickly?

Well, part of it is being able to type or write quickly, of course. The other part is easy once you know about it. Alas, pretty much everything you learned in school gets in your way.

Back in the mid-80s, I stumbled on a few books that completely changed my way of teaching writing. We had a copy of Peter Elbow's Writing Without Teachers in our English department bookshelf, but I don't know if any of my colleagues read it. I didn't until about 1990, and I had to blow dust off it. It was a landmark book that few people appreciated when it appeared.

The book I did appreciate (All the books I mention here are available on Amazon) was Writing the Natural Way by Gabriele Lusser Rico. She introduced me to clustering or webbing, a quick way of connecting apparently random and disparate ideas for writing. She also pushed free-writing (Elbow's idea first). She offered a series of techniques and writing prompts students could grasp and apply quickly. I was struggling with kids who read five or six years below grade level, hated grammar, and were terrified at putting anything more than their name on paper. For years, they'd known they were stupid because their teachers and their grades told them so.

The following September, I stared using Rico's exercises. By the end of the first semester, many of the kids wouldn't admit it, but they wrote more clearly, more creatively, and with more pleasure and less fear. Rico encouraged them not to worry about spelling, punctuation or grammar. I spent the first month of classes encouraging them to write fast for five or ten minutes without worrying about making sense or being correct. If they got something down on paper, we could fix it later.

Remember, a first draft is like the block of marble before you sculpt an elephant. That first few minutes is chipping away everything that doesn't look like an elephant. Rico does that. So does Elbow. The beauty of free-writing is that the only wrong way to do it is to think about it. Just write. If you go fast enough to outrun the constraints, an idea will present itself. That was the hardest sell for my students, but they finally discovered it was true.

Henriette A. Klauser's Writing on Both Sides of the Brain uses many of the same techniques. The left side of our brain is sequential, literal, and organized. It also judges. The right side works in patterns, sounds, and images. It's creative without judging. We're trained from day one to be correct, but we don't learn to let go. Those books showed me how to help my students let go.

Years later, I discovered Anne Lamont's Bird by Bird with her priceless advice on the value of the "shitty first draft." Don't think about spelling, grammar, punctuation or making sense. Just push yourself. If you don't know what you want to say, the cluster or web will help you. If you do know what you want to say, don't worry about how to start. Jump in and listen to the words. Maybe even say them out loud. But turn off the editor.

Mihaly Csikszentmihalyi (I checked the spelling) published Flow: The Psychology of Optimal Experience around the same time as the other books, and James L Adams gave us The Care and Feeding of Ideas with the same message. Their findings work for almost any field you can name. Athletes call it being in the zone and musicians talk about finding the groove. Time stands still because you focus ONLY on the task at hand, whether it's shooting the free throw, following the chord changes or staying in the moment without worrying about the result...yet. Very Zen, yes?

For me, once I know what should happen in a scene, I write a first sentence (usually telling where or when it's happening) and keep going. Maybe it's a great sentence, but more likely it's junk. It doesn't matter because I can fix it later. I no longer listen to music when I write (I used to like Baroque Largos because the slow tempo helps concentration) because I have to hear the words. Sometimes I even say them out loud and the scene becomes a dialogue or group discussion. I can type about 85 words a minute and I don't worry about typos or grammar. That's what the next five or six drafts are for. If I get lost, I type whatever comes to me and cut it or move it later. A few years ago, I wrote a scene


that had a half-page of "where the hell am I?" over and over until I found it again.

It's energizing and it's productive. The hardest part is letting go of everything you were taught to worry about in school.