Two Strand Stories: Behind the Scenes


by John Floyd
I always find something to like about SleuthSayers posts, whether they stick to the subjects of mysteries and writing or veer off into something else--but some of those I've enjoyed the most are the ones where an author talks in detail about specific stories or novels he or she has written. Sort of an insider's view.

With that in mind--and hoping others might feel the same--I'd like to look at two of my recent stories, one of them in the previous issue of The Strand Magazine and the other in the current issue. 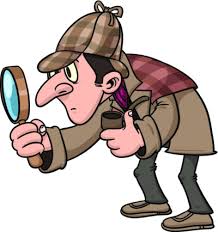 The first story, "Foreverglow" (original title "The Foreverglow Case"), appeared in The Strand's June-Oct issue. It's the story of a regular and not-overly-bright guy who meets and falls for a young lady who, as it turns out, has what she feels is a brilliant plan to steal a fortune in diamond jewelry from the store where she's employed. They manage to work together to pull off the heist--but what happens next was not in their original plan.

The second story, "Lucian's Cadillac," appears in the current (Oct-Jan) issue, which they're calling the Twentieth Anniversary Collector's Issue. It's a tale about three lifelong but unlikely friends--a genius, a "little person," and an ex-football player--who happen to witness a double murder. They testify against the killer, and later wind up on his payback list when he escapes from the state prison. It's sort of a High Noon/Cape Fear kind of story, with three over-the-hill seniors as the targets of revenge.

What's interesting, to me, about these two stories is what I found when I started comparing them. At first glance, they have a lot in common. Here are a few of the 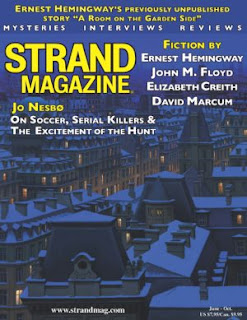 - Both stories have protagonists with common, everyday lives and jobs. I find myself doing this a lot. Heroes don't have to be superheroes.

- Both are about 2500 words in length. This is actually a little short for Strand stories; I think the guidelines still say between 2K and 6K.

- Both are mysteries. This just means a crime is central to the plot.

- Both have characters who are romantically attracted to each other. The two thieves in the first story, and the viewpoint character and a female sheriff in the second. A romantic element, even if minor, can add a level of interest and/or conflict.

- Both are told in past tense. (I probably shouldn't have listed this, since all my stories are past tense. But it is a similarity.)

- Both are standalone stories. One of the two could conceivably become a series, but I have no plans in that direction.

- Both, except for some violence, have family-friendly content. Hell no, the priest and the Republican senator are NOT having an affair.

- Both are set in the present day, and in fairly small and unnamed towns. In one of the stories I mentioned that Atlanta was nearby, but otherwise I didn't see a need to use real, it's-on-the-map locations.

- Both have only a few named characters but a LOT of dialogue. (One story has two speaking roles, the other has three.)

- Both include major plot reversals. I find this hard to resist when I write, because it's the kind of thing I like to encounter myself in the stories and novels I read.


But . . . here are some things about those stories that aren't alike at all. 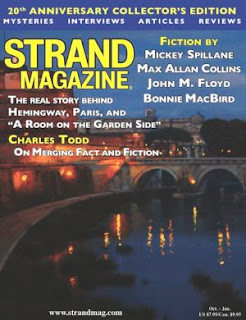 - In one story, the protagonists willfully break the law; in the other they don't. Asking the reader to root for the bad guys doesn't always work--but sometimes it does (Get Shorty, The Godfather, Butch Cassidy, etc.).

- One is written in third person, the other in first person. This wasn't even a conscious decision on my part--it just seemed the right way to tell these particular stories.

- One has several different scenes; the other has no scene breaks at all. A factor here is that in one story the action includes different places at different times, and in the other story everything happens at the same location--a neighborhood bar owned by the protagonist--in the space of only an hour or so.

- In one, the romantic element drives the story; in the other it's incidental. What can I say?--Love is mysterious.

- One's a heist story; the other's a tale of revenge and survival. As a result, one of the stories has no specific named antagonist, while the other does.

- In one story, the characters are fairly "average"; in the other there'a a lot of diversity. The group of close friends in the second story includes a brilliant scholar, a dwarf, and an overweight former linebacker. Plus a lady sheriff.

- One contains no violence; the other does. This makes sense because one's a try-to-escape-without-getting-caught story, and the other's life-or-death, do-whatever-you-must-to-stay-alive.

- In one, the main characters are young; in the other they're old. The ages, here, are appropriate to the plot: the jewelry thieves are confident but inexperienced, and the three old men facing a deadly enemy are experienced enough not to be confident--besides being physically challenged.

- One has a surprise ending; the other does not. Although I hope both endings are satisfying.


So the two stories have many things in common, including some style/structure elements, but they're vastly different. I think that's to be expected with my stories, and probably with yours as well. If they're too much alike--even those that are "series" installments--they'll be boring to write and boring to read. This applies to novels as well as shorts. 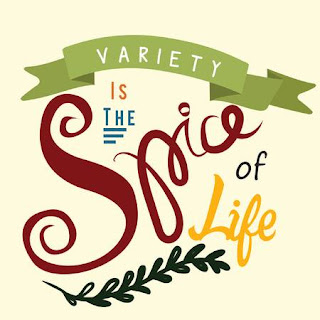 For you writers out there, how different from each other are the stories you create? Are most told in the same viewpoint? Do most have the same kind of geographical setting? The same time period? The same tense? The same length? Complex plots? Happy endings? Surprise endings? How about the amount of dialogue? Violence? Sex? Profanity? Humor? Is there any one thing that you find yourself always including, or always avoiding?

Here's some sage advice from Elmore Leonard, and supposedly from Alfred Hitchcock as well: Leave out the parts that people skip.

Easier said than done.
Posted by John Floyd at 00:01