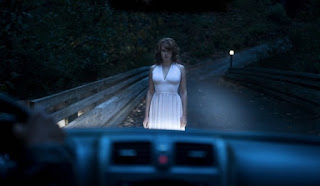 "Brown Eyes Crying in the Rain," my take on the Ghostly Hitchhiker legends, appears in the upcoming issue of Occult Detective Quarterly. It didn't occur to me until a few days ago how appropriate that is. Tomorrow is, of course, Christmas Day. 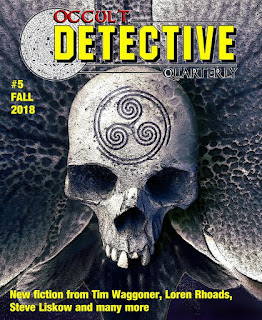 The British have told ghost stories as part of the holiday celebration for centuries, apparently because the winter solstice is only a few days earlier and the Christians co-opted December 25th to celebrate the birth of Jesus of Nazareth and overshadow the Pagan Saturnalia. Ghosts presumably walk more freely on the longest night of the year, which celebrates the death and re-birth of the sun.

Oliver Cromwell, never the life of the party, didn't want Christmas celebrated as a holiday. He wanted the workers to labor for another long and underpaid shift. During his tenure as ruler of the Commonwealth, he even banned Christmas carols. Barrel of laughs, that Ollie.

But the ghost story is still alive and well (Is that an oxymoron?), and it may have reached its peak of popularity in the Victorian era, when Charles Dickens published short novels for the season, many of them ghostly tales. His most famous is A Christmas Carol. Does anyone even know how many films and theatrical adaptations of that one work exist? My wife and I attended a stage version at the Hartford Stage Company this year, where it has been an annual event for twenty years. It still sells out the thirty performances. 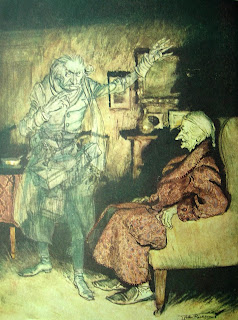 Other British writers have offered ghost stories, too. In Shakespeare's The Winter's Tale (1611), Prince Mamillius says, "A sad tale's best for winter. I have one/ Of sprites and goblins." We never hear the tale because Mamillius dies before intermission. Mary Shelly Wrote Frankenstein when Byron challenged her and others to write a ghost story, and she dated the beginning of the book in mid-December. Wilkie Collins and Elizabeth Gaskell revived the faltering tradition along with Dickens. Algernon Blackwood, Conan Doyle and M. R. James carried it on.

I don't remember Poe setting any of his stories at Christmas (I can't find my copy of "The Devil in the Belfry" on my shelf. Is that set at yuletide?), but Henry James sets the telling of The Turn of the Screw around the fire during a Christmas celebration.

Remember the popular (Well, in my day...) Andy Williams song, "It's the Most Wonderful Time of the Year?" The third verse ends with "...There'll be scary ghost stories/ And tales of the glories..."

I seldom set stories around a holiday, the only exception being "Santa and the Shortstop," which appeared in Sherlock Holmes Mystery Magazine a few years ago.

But who knows? A little more eggnog and maybe I'll be in the spirit to write another ghost story for next year... 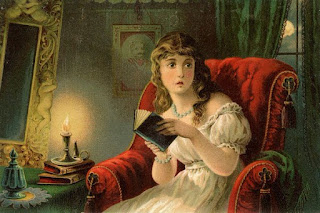 In the meantime, Merry Christmas to all, and to all a good fright.
Posted by Steve Liskow at 00:01