Whoops wrong version. I use to hear the above poem on the radio at Christmas time when I was a kid in New Mexico. Guess it was so different that parts of it stuck with me. Allegedly, that version of the poem was written by Robie, Anita and Juan LNU (Last Name Unknown) in 1930 for a Spanish class at Indiana University. I rediscovered it recently through the power of the internet and found that several versions of it have been recorded by various Latin musicians. 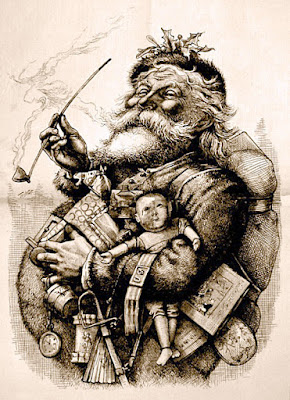 Of course, you probably know the English version rather than the Spanglish one. And this brings us to the original Christmas Eve poem. "Twas the Night before Christnas," originally known as "Account of a Visit from St. Nicholas," first published in 1823 in a New York newspaper. At the time, the author for the English version was that infamous guy known as Anonymous. Seems that in those days, "great gentlemen" considered it beneath themselves to publish in newspapers, so they used the byline of Anonymous.

Within two decades after first publication, the English version had been reprinted several times and received great popularity with the American public. At this point in its rising popularity, two different camps stepped forward to claim authorship. There are facts to to support both claimants, so you can take your pick.

If you find yourself as more of a traditional person and being resistant to change, then you will probably go with the original claimant, Clement Clarke Moore, a bible professor of German extraction. If you are a fan of technological advances, then you will probably go with Major Henry Livingston Jr., a gentleman poet of Dutch extraction. Both were New Yorkers and Livingston was distantly related to Moore's wife.

No original document of the poem has surfaced, and Moore later explained that he was too embarrassed at the time to acknowledge what he considered to be a trifle. Supposedly, a friend of his was the one who submitted the poem to the newspaper. In 1844, at the request of his family, Moore finally took credit as the author, however, it is alleged that before he took the credit, he first wrote to the newspaper to inquire if anyone there knew who the original author was. By that time, those who knew the real name of the author were dead.

When the poem was first published, two of Santa's reindeer were named as "Dunder" (Thunder) and "Blixem" (Lightning), which is Dutch. Years later, when Moore hand wrote some copies of the poem, he named the same reindeer as "Donder" and "Blitzen," which is German. Moore spoke German, but not Dutch. Livingston spoke Dutch.

The Livingston family claimed that Major Livingston wrote the poem, but they had no physical proof to their claim. In recent years, the family sought the help of Don Foster, an English professor at Vassar University. He is also a scholar of authorial attribution. Foster made comparisons between the Christmas poem and Moore's body of works, beliefs and personality. He also made comparisons between the poem and Livingston's body of works, beliefs and personality. The end result was that Forster said Livingston was the author. Critics claimed that a bible man such as Moore would never make such a false claim. Foster countered with an incident of Moore hand-writing in the front of a sheep farming manual that he had translated this book from French into English, however, a small copyright in the back of the book gave that credit to someone else.

Then, in 2016, Emeritus Professor of English at the University of New Auckland McDonald P. Jackson published a book in which he analyzed the opposing arguments. Jackson used modern computational stylistics and statistical analysis of phonemes. His conclusion was that Livingston wrote the Christmas poem.

So, in short, there you are. You can dig deeper into the various arguments, comparisons and what facts do exist, or you can just choose a side and enjoy the poem regardless. The original claimants and their witnesses are all deceased, so we can't polygraph any of them now to see who is telling the truth. Bottom line: Somebody tried to steal Christmas, but which claimant is the original author and which is the Grinch?

Happy Holidays to you and yours!

That's another thing. One claimant said Happy Christmas instead of Merry Christmas.

Just make sure your works get a copyright, even those you may consider to be a trifle. Who knew?