And Be A Villain


by Eve Fisher
When it comes to mysteries, my favorites are really those where I love the detective, from Miss Marple to Maigret to Inspector Brunetti to the collective of New Tricks.  But the villains matter, too.

And my favorite villain of all time is Count Fosco in Wilkie Collins' The Woman in White: Fat, witty, with the head of Napoleon and a taste for sugar-water and cigarettes, he can tame anything:


"Mind that dog, sir," said the groom; "he flies at everybody!" "He does that, my friend," replied the Count quietly, "because everybody is afraid of him. Let us see if he flies at me." And he laid his plump, yellow-white fingers... upon the formidable brute's head, and looked him straight in the eyes. "You big dogs are all cowards," he said, addressing the animal contemptuously, with his face and the dog's within an inch of each other. "You would kill a poor cat, you infernal coward. You would fly at a starving beggar, you infernal coward. Anything that you can surprise unawares—anything that is afraid of your big body, and your wicked white teeth, and your slobbering, bloodthirsty mouth, is the thing you like to fly at. You could throttle me at this moment, you mean, miserable bully, and you daren't so much as look me in the face, because I'm not afraid of you. Will you think better of it, and try your teeth in my fat neck? Bah! not you!" He turned away, laughing at the astonishment of the men in the yard, and the dog crept back meekly to his kennel.

His conversation is brilliant, deviant, erudite, misleading, and his decisions are never the expected ones. This is not the serial killer, the mastermind, the thug, the common criminal, or anything else you have ever heard of. Count Fosco is unique.

And I'll start off with the one that stunned me the most - one of the few who took me totally by surprise - is Angela Lansbury in the original The Manchurian Candidate. Brilliant portrayal, and I didn't know that she'd played villains before. When I saw it for the first time, I hadn't yet seen Gaslight on TCM, and she wasn't yet Jessica Fletcher, but she'd done Bedknobs and Broomsticks, and played the heroine of The Lady Vanishes, so I assumed she was always pretty nice. Boy, was I wrong. She was just always pretty great.

Sheer brilliance is one thing. Another is... Well, have you ever watched the Thin Man series with William Powell and Myrna Loy? The first is a classic, but the chief virtue of the rest is the chemistry and playfulness between Powell and Loy. But After the Thin Man has the most unexpected villain in movie history, simply because

it's played by Jimmy Stewart. Yes. America's male sweetheart was a murderer. To be honest, he really didn't know how to play it. He was only 26, and I figure they were experimenting, and the script wasn't that good. And granted, back in 1936, people wouldn't have been surprised to see Jimmy Stewart as the killer, because he hadn't had decades to solidify his stardom as the good guy. But watch it now, and... wow!

And the director of After the Thin Man was no Alfred Hitchcock, who did indeed know how to use Jimmy Stewart's wholesome reputation, drawl, and All-American good looks to up the ante of playing men who aren't above a little voyeurism or stalking (Rear Window), or downright obsession, possession, kidnapping and assault (Vertigo). And still remain a hero. But then I've always felt that Alfred Hitchcock was trying to live through Stewart in both roles. 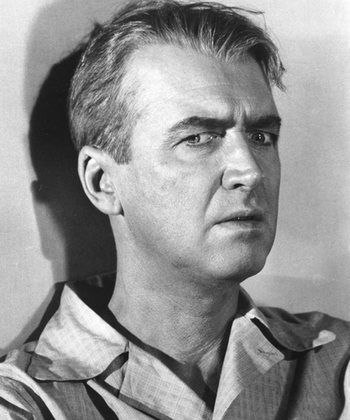 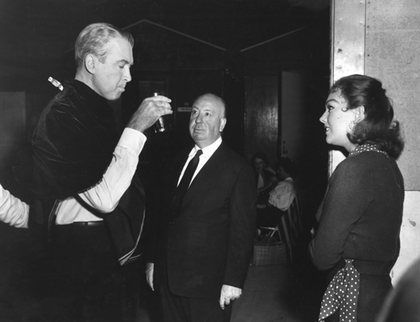 (All photos from IMDB)

I think it always catches you by surprise when an actor who's always played the hero suddenly turns into a villain.  I'll never forget seeing Henry Fonda in Once Upon a Time in the West, chowing down on Claudia Cardinale with gusto, while discussing how much he'll regret killing her.  And you could tell by the gleam in his eyes that he was having fun. The story is that Sergio Leone convinced Fonda to play stone cold killer Frank by telling him: "Picture this: the camera shows a gunman from the waist down pulling his gun and shooting a running child. The camera tilts up to the gunman's face and...it's Henry Fonda."

I think a lot of actors who have always been stuck playing good guys really enjoy a chance to be a villain.  Charlton Heston certainly had the time of his life playing Cardinal Richelieu in The Three Musketeers and The Four Musketeers (1973).  "One of my best parts" he said in this interview on YouTube:

BTW, doing some research, I found a blog post by a man named Graham Daseler in which he said, "Charlton Heston was not a protean performer, like Marlon Brando or Paul Newman, playing someone new in every film: to see one Heston performance is, more or less, to see them all. He didn’t play romance especially well. Humour seemed to be completely beyond him (a deficit that, oddly enough, made him perfect for the role of Cardinal Richelieu in Richard Lester’s campy adaptation of The Three Musketeers)."  (read the whole HERE)  I tend to agree.  He always played everything straight, and in the two Musketeer movies, he had some of the best lines:

"I love you, my son. Even when you fail."
"I have no enemies.  France has enemies."  (Mr. Heston's own contribution to the script, from historical records.)
D'Artagnan: "By my order and for the good of the state, the bearer has done what has been done."
Richelieu: "Hm. One should be careful what one writes... and to whom one gives it. I must bear those rules in mind."

That last one - well, there's words of wisdom for us all, right?

And, as an early Christmas stocking stuffer, The Two Ronnies Christmas Special 1987 Full!  With special guest star, Charlton Heston (around 35:00):