There's a Hitch in it, somewhere


by Robert Lopresti
Sometimes a road trip can change your life.  I took one with my parents in the late sixties to upstate New York.  I think we went to Lake George, but I don't remember that at all.  What I remember is seeing a fat, familiar face on a newsstand.

I wish I remembered which issue it was.  I looked on this helpful but incomplete page and the oldest story I can be sure I read in the magazine was from the October 1969 issue ("Scream All The Way," by Michael Collins. I remember the illustration - a dramatic drawing of  a man falling out of a building - so I know it wasn't a reprint in a book).  But I am confident that I was reading it before then.

What attracted me?  I don't think at that age (roughly fourteen) I had ever seen a Hitchcock movie, although I had certainly enjoyed his TV show, and his children's anthologies, and the Three Investigator books,

and I believe I had discovered the anthologies that often included stories from the magazine. 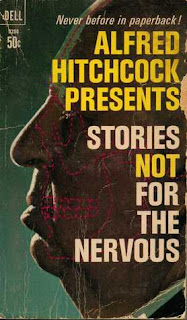 Quite a cottage industry Hitch had going,  huh?  All of them might as well have been gateway drugs, preparing me for mystery magazines, I guess.

There were two other features back in those days that made AHMM unique.  First, each issue began with a note in solemn tones signed by Hitchcock himself, introducing all the stories.  I don't think that even at that tender age I imagined Alfred had anything to do with writing the notes, but it was another way of tying the mag to one of the most famous people in the world.

They also used to tuck him into a story illustration in most of the issues, like his famous cameo appearances in his movies.  There would be a tubby patrolman in the back of a crime scene, or a rotund waiter in a restaurant.   Or see this one, from 1981. 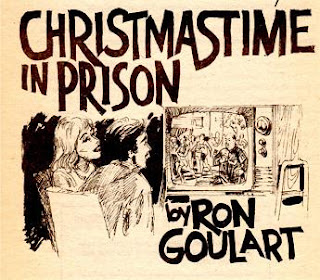 By then AHMM  had been sold by H.S.D. and was published by Davis, the same company that owned  Ellery Queen's Mystery Magazine.


Over the years I have heard the question a hundred times: what's the difference between Hitchcock and Queen?  My answer used to be: Hitchcock sometimes buys my stuff.  But since Queen gave in and bought one of my stories that distinction isn't as helpful anymore.  I usually say Hitchcock is fonder of humor, suspense, and twist endings.  Queen leans toward longer, darker, stories,  and is more concerned with the history of the field, so it features pastiches, fair play mysteries, and the like.

But I'm sure the main reason I have been published more often in AHMM than in EQMM (18 to 1, to be exact), is that I grew up on the former. My tastes in mystery stories were shaped by AHMM, so it is hardly surprising that my writing tends to match up with theirs.

Impressive, you might say.  But you might also ask why I bring up this particular magazine in the first place.  If you don't already know all shall be revealed in the next few days, starting on Friday, when we will come back to AHMM in a big way. Until then, keep reading and writing.
Posted by Robert Lopresti at 00:01