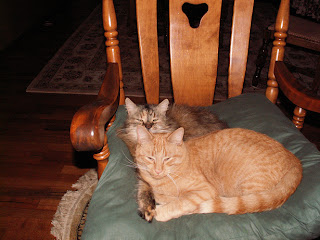 So, I have been sitting in the 'ol rocking chair with my black notebook full of short stories, trying to do some rewriting.  My trusty assistant has been doing her best to help by stepping on the notebook and sticking her tail in my face.  Thanks, Chloe.  Don't know what I would do without you.  (And when can I start?)

I rewrite a lot.  I should count the number of times an average story goes through the mill but it would probably be too depressing.  Ten?  Easy.  Probably twenty is more typical.

I am old enough to remember the good old days when rewriting meant typing the whole damn thing from scratch every time.  Now the computer remembers it for me and I just have to put in the changes.  Bless technology.

But I still have to read the thing all those times.  As I have said before, my first draft is basically a full-length outline.  Barely literate.  Very few sentences will make it from there to the published (oh, please) version without being changed.  And that's fine with me, but it does  mean there is a long slow process of converting the dross to gold.

What I find most annoying are the notes I leave to myself as I go.  FIX.  CHECK GEOGRAPHY.  CALENDAR?  REWRITE!  I never know when to address these commands: when I am editing with a pen or later at the computer.  So the urgent notes tend to move along from draft to draft.

It is so much easier it is to rewrite songs.  That happens automatically.  After I write a song I sing it twenty or thirty times while I am doing other things - bicycling or washing dishes, for instance, - and then when I look back at the written version I find that extra words have dropped out, phrasing has improved, etc. That's one reason folk songs tend to be so memorable; hundreds of editors converting it into something better.

Unfortunately, I find that singing a short story over and over doesn't work very well.  However, here is a trick I do find helpful: when you're near the final draft and thinking about sending a story out to the editor, read it out loud.  It is remarkable how many times the ear will catch a gaffe that the eye stopped noticing.  Like a changed sentence that left a remnant behind: "It wasn't not going to be easy."  I thought that I had kicked that "not" out...   The ear will also catch style problems, like using the same word three times in a sentence.

And now, if you will excuse me, my assistant says I should get back to work.  Or feed her some Friskies.
Posted by Robert Lopresti at 00:01