Valentine's Day -- Love Among the Clues

Every once in a while my schedule of alternating Tuesdays coincides with a special day on the calendar.  Such is the case today:  Valentine’s Day.  A day of romance, a day that, while falling in the midst of winter, conjures spring.

Trying to stay on topic here I decided to offer up my best recommendation for a Valentine’s Day mystery:  a story that will tug at your mind while also tugging at your heart.  Finding a candidate that fits that description is not, however, an easy task.  The Golden Age of detective fiction (my favorite hunting ground) is not exactly riddled with romantic mysteries.  This can be illustrated best by examining some favorite classical mystery authors whose works simply do not fit the bill. 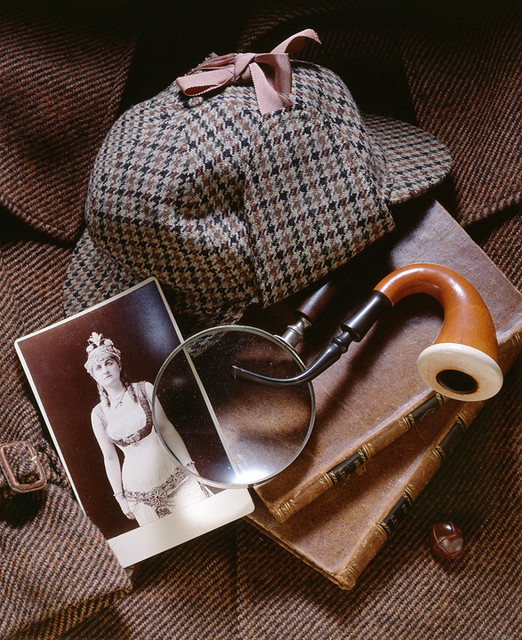 None of the Sherlock Holmes stories are potential Valentine’s Day nominees.  The closest we get to a romantic involvement for Mr. Holmes is Irene Adler, who actually appears in only one Holmes story, A Scandal in Bohemia..  Irene Adler has no romantic scenes with Holmes in any Arthur Conan Doyle story, and in fact A Scandal in Bohemia ends with her marriage to someone else.  Nonetheless she is frequently linked with Holmes, but in various pastiches, not in the original Arthur Conan Doyle canon.

The source for these romantic conjectures involving Sherlock and Irene probably stems from a passage in  A Scandal in Bohemia where Watson sets the stage as follows:


To Sherlock Holmes she is always the woman. I have seldom heard him mention her under any other name. In his eyes she eclipses and predominates the whole of her sex. It was not that he felt any emotion akin to love for Irene Adler. All emotions, and that one particularly, were abhorrent to his cold, precise but admirably balanced mind.

This, plus the fact that Irene Adler is referred to, albeit fleetingly, in four other Holmes stories, A Case of Identity, The Adventure of the Blue Carbuncle, the Five Orange Pips and His Last Bow, inspired other writers, notably Nicholas Meyer and J.S. Baring-Gould, to speculate as to a romantic involvement between the two.  But none of their stories, and certainly none of Arthur Conan Doyle’s, meets our Valentine’s Day requirements of a mystery that is also a romance.

My favorite Golden Age detective, Ellery Queen, fares no better.  While Ellery engaged in some flirtations over the years, in The Finishing Stroke for example, no actual romantic involvement ever took place during the course of the Queen novels and short stories.  Two recurring female characters appear as quasi-romantic possibilities, but, again, neither suffices for our purposes.

The first of these is Nikki Porter who for a time was Ellery’s secretary.  Nikki first appeared in the Ellery Queen radio series and movies and was later a character in two Queen novels, There Was an Old Woman and The Scarlet Letters .  Nikki also appears in several short stories, but she and Ellery were never portrayed as a couple.  (Just as Irene Adler inspired other writers to hypothesize romantic involvement with Holmes, so, too, Nikki inspired a similar hypothesis concerning her involvement with Ellery in The Book Case, a conjecture for which I am largely responsible!)

The only other possible femme fatale in the Queen canon is Paula Paris, a reclusive Hollywood columnist who sparks Ellery’s interest in The Four of Hearts and who also appears in several Queen short stories set in Hollywood.  (Paula also makes a brief appearance in my Queen pastiche The Mad Hatter’s Riddle.)  But, again, whatever spark there might have been between Paula and Ellery ultimately fails to ignite.

What of Agatha Christie?  Well, slim pickings there too.  As far as I can determine there was never any reference to a love interest for Miss Marple, and no love story involving her ever played a part in the Miss Marple novels and short stories.  We get a little closer with Hercule Poirot.  Poirot was apparently smitten at least once --  by Vera Rossakoff , a Russian countess who appears in The Double Clue and then re-appears in The Big Four and The Labours of Hercules.  However, while there is infatuation that is evident on Poirot’s part, at least in the course of Christie’s written word any attraction between the two remains unrequited.  So no Valentine story there.

With Rex Stout’s Nero Wolfe we fare, if anything, even worse.  While there is the occasional female character who earns the grudging respect of Wolfe, by and large the detective is portrayed by Rex Stout as a misogynist.  Archie Goodwin describes Nero Wolfe’s views on women as follows in The Silent Speaker:

The basic fact about a woman that seemed to irritate him was that she was a woman; the long record showed not a single exception; but from there on the documentation was cockeyed. If woman as woman grated on him you would suppose that the most womanly details would be the worst for him, but time and again I have known him to have a chair placed for a female so that his desk would not obstruct his view of her legs, and the answer can’t be that his interest is professional and he reads character from legs, because the older and dumpier she is the less he cares where she sits. It is a very complex question and some day I’m going to take a whole chapter for it.

Well, interesting, all in all.  But not the stuff of which Valentines are made.

As an aside, I should at least mention here the famous "e-o/o-e" theory propounded by John D. Clark, Nicholas Meyer, Frederic Dannay and Manfred B. Lee, writing as Ellery Queen, and W.S. Baring-Gould that the combination and order of the vowels in "Sherlock Holmes" and "Nero Wolfe" are a clue that Nero Wolfe is in fact the son of Sherlock Holmes and Irene Adler.  But, again, while there are Valentine possibilities here, the theory is derivative and appears only in homages and analytic works.

We get much closer to the mark, however, with The Thin Man by Dashiell Hammett.  While it is sort of hard to believe, given all of the movie and television sequels that this book spawned, Hammett only wrote one book starring Nick and Nora Charles.  In fact, it was the last book he ever wrote.  And, even more strange is the fact that the Nick and Nora did not even appear in the original version of the 1934 novel, which was first published in a shorter version in installments in Redbook.  In any event, the romantic and flirtatious interchanges between Nick and Nora push this novel much closer to a Valentine’s Day nominee.  Indeed it was Hammett’s novel that set the stage for later spins on the “romantic couple” as detectives, notably television’s MacMillan and Wife, starring Rock Hudson and Susan St. James, and even Richard Stevenson's characters Donald Strachey and his partner Timothy Callahan, who have been referred to as the gay Nick and Nora.

Having said all of this, however, The Thin Man is no better than a near miss, as far as I am concerned, for today’s purpose.  While the detectives are a couple, the mystery itself doesn’t tie back to or otherwise derive from their romantic involvement.

Well, as you have probably guessed, I do have a personal favorite to nominate for best Valentine's Day mystery story.   It is Random Harvest by James Hilton.

I know, I know, Random Harvest isn’t a classic Golden Age “whodunit” mystery.  But it is a classic.  And it is also, most certainly, a mystery.  Written in 1941, Random Harvest tells the story of Charles Rainier, a wealthy businessman and politician, who battles his way out of amnesia to search for his long-lost love.  The story is a wonderful and nostalgic depiction of life in England from the First World War to the brink of the second, but it is also one of the finest classic mysteries I can remember reading.

There is a tendency to say too much when discussing Random Harvest, and this I refuse to do.  As I have said before, “no spoilers here.”  I will offer up a snippet from the New York Times review published back in 1941:  “a strange tale . . . harrowing and romantic and tender.”   The Chicago Tribune, in the same year, called the book “Mr. Hilton’s best novel to date.”  That is saying something since Random Harvest was preceded by Lost Horizon  and Goodbye Mr. Chips.  Random Harvest is, in any event, my Valentine’s Day nominee since, to my mind, it is one of the best blends of mystery and romance ever written.

So if there are any readers out there who have somehow gotten to 2012 without reading Random Harvest, or watching the 1942 film version starring Ronald Coleman  and Greer Garson, this book is for you.  My advice, however, is that you should look no further for information concerning the book: don't watch the movie, don't search out reviews, don't read about it on Wikipedia.  Just get the book and then read it as James Hilton intended, from start to finish without the “help” of others.

Happily, unlike many volumes from the 1940s Random Harvest is still readily available from Amazon and Barnes and Noble.  There is even a Nook edition for $3.99.  (Sorry, apparently it has yet to be “Kindled”!)