The Digital Detective: Pay Your Debtors 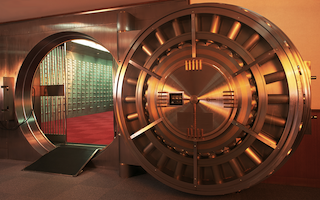 This continues a series of earlier articles about computer fraud.† Originally I practiced a career of systems software design and computer consulting, but I sometimes came upon a more shadowy world, that of computer crime. I seldom sought out fraud but I sometimes stumbled upon it, picking up undetected clues others missed.

This episode doesn’t deal with crime, per se, but it includes a banking con, minor as it is. The scheme required a little ‘social engineering’ and, though the word might be Yiddish, no one can schmooze like Southerners.

Damn Ernie. I hounded that man all summer long for the rent. Finally last fall, I hooked up my corn picker and started up the corn rows. Now a corn picker ain’t a quiet machine, and lo and behold, neighbor Ernie come dashin’ out of his farmhouse yellin’ and cursin’ that I’m stealing his corn.

At the bank, I always get in Molly’s line. She’s a sweet, buxom lass, and I’d been thinking about asking her out.‡

But wait, I say, I almost forgot to cash a check. This time I send over Ernie’s $1000 check and this time I get back a thousand dollars.

I took Molly to the horse show that Saturday. Now I tell you personal like, you want to get a lady in a receptive mood, bein’ around horses will do it. Something about women and horseflesh– can’t explain it– just a word to the wise.

Molly said Ernie wanted to call the authorities, but the branch manager told Ernie he’d be the one in trouble for writing bad checks. He didn’t mention Molly could have fallen in the soup too if they’d figured out her role.


† This essay had originally appeared 19 May 2013 on SleuthSayers for a matter of hours, when a magazine editor asked me to unpost it with an eye toward publishing. A check never arrived, so I now return the article for your enjoyment.
‡ Commonly in Virginia’s Shenandoah Valley, ‘out’ sounds are pronounced like a Scottish ‘oot’. Thus he really said, “I’d been thinking aboot asking her oot.”
Posted by Leigh Lundin at 00:00