I encountered Strunk and White's The Elements of Style in my senior year of high school, and have worn out several copies since then. Practically every writer I know quotes its advice about active verbs and various other nuggets, and that's both good and bad. Strunk geared the book to students writing expository essays for college (He taught at Cornell). It's not good for writing fiction because it encourages a stripped-down style that makes for strong concrete statements at the expense of a unique voice. All writing should sound like it comes from a human speaker, especially fiction writing.

The adults who read to me when I was young included teachers, actors and journalists who loved words and language. Because of them, I hear what I read (and write), and I hear bad writing instantly. It's like having perfect pitch and listening to someone playing a piano that's out of tune. Jack Kerouac said, "It ain't whatcha write, it's the way atcha write it," and he's right. I can name several best-selling authors who tell good stories in prose that would not have survived my tenth-grade comp and lit class. Sadly, some of them label themselves "literary."

Facebook and various websites often present lists of the best books for writers (I even distribute my own list at workshops), and they generally mention the same handful of books.

I disagree with several of the choices, and one book that should top them off like a good head on a beer never shows up. 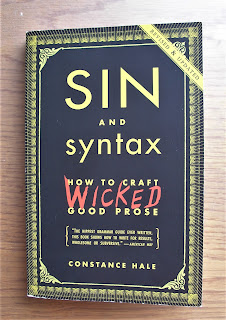 Hale published it in 1999 and produced this revised edition in 2013, updating examples and adding exercises and activities that expand your ear and your mind. It's a rare book that examines style concretely and completely. It's fascinating, funny and tough.

Hale divides the book into three parts: Words, which discusses the eight parts of speech; Sentences, which explains subject, predicate, phrases, clauses, length and tone; and Music, which examines melody, rhythm, lyricism and voice. The last section matters because I can't name another book that touches on these issues.

Each chapter has five parts. "Bones" talks about the essential grammar and the logic it's built upon. "Flesh" gives lessons on good writing and offers examples of creative and effective prose. Hale's examples come from mythology, "great" literature, advertising, children's stories and almost anything else you can name. "Cardinal Sins" points out real errors in usage and shows why and how they are bad. "Carnal Pleasures" shows how to break the rules and make language beautiful and effective. The "Catechism" section is new to this edition. It provides exercises, activities and writing prompts that force readers to think about what the words on paper or on the screen are supposed to do.

The rest of the book shows how to follow them without becoming a drudge.

This is from "Cardinal Sins" discussing pronouns:

Speaking of whose, the one truly unforgivable sin that haunts the use of pronouns is the confusion of whose with who's and its with it's. Pronouns, when they get possessive, act weird. We do not say I's, you's, he's, or she's to indicate possession, so why would we write who's or it's? Possessive pronouns are all apostropheless: my, you, his, hers, its. Who's and it's are contractions of who is and its (or who has and it has). Learn this or die.

Her adverbs discussion includes what she calls "Valley Girl trash adverbs" that "reflect the mindless banter of surfers, Valley Girls, and adolescent mallmouths." "Unless you want to sound like a lightweight," she warns, "stay away from them."

She then quotes "Casino Kaiser Donald Trump" (Remember, this was written in 2013) turning on New Jersey governor Christine Todd Whitman during her reelection campaign. "I was totally a good friend to her, and she showed totally no loyalty."

Hale's treatment of Cardinal Sins with interjections is both brutal and hilarious. She wreaks havoc on "like," among other verbal tics. She cites British comedian Catherine Tate's entire monologue built from Valley Girl one-word interjections. It's on YouTube, so check it out for yourself.

The section on Music goes where most writing books fear to venture, and it's worth the price of admission all by itself. Written language should sound pleasant or unpleasant to help convey the ideas and meaning, so these chapters show how those devices we learned when studying poetry (alliteration, onomatopoeia, etc.) can carry the ball in prose, too. Her examples and exercises raise the bar on prose writing to new highs.

If I had time for 50 rewrites, I might be able to get there.