You Can't Say That 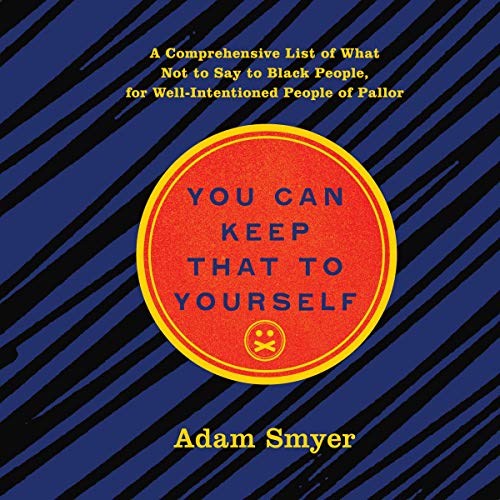 I seldom review books, but I'm making an exception today.  This little (and I do mean little) volume has nothing to do with crime or writing directly, but it has a lot to do with language.

Adam Smyer's new book is You Can Keep That To Yourself: A Comprehensive List of What Not to Say to Black People, for Well-Intentioned People of Pallor.  I'd describe it as a novelty book, meaning it's small enough to fit in your pocket and probably only takes an hour to read.  But you are likely to think about it for much longer.

It is written from the viewpoint of Daquan, "the black coworker you are referring to when you claim to have black friends."  Daquan lists a lot of words or phrases and explains why a white person should not say them to a person of color.

As you can see the book is terse, pointed, and (to this Middle Class White boomer) vulgar.  It is also extremely funny.

For me the words fall into three categories.

* Terms I know enough not to use, like Purple.  "It amazes us how often you still break out the old saw about not caring if someone is green or purple.  You realize, you are likening me to some nonexistent purple alien to show that you recognize my humanity.  You could try to keep that to yourself."

* Terms I know better but still use occasionally.  Articulate.  Ouch.

* Terms that were news to me.  Yowza!  That comes from minstrel shows?  I had no clue.

There is another word that Smyer objects to which I have given a lot of thought to: Dark. As in "Recently the show's humor has turned dark." I understand his complaint but what other word covers the same territory?  Grim?  Serious?  Morbid?  None really handle it.

I suspect I will get complaints about political correctness for writing this.  So be it.  I don't want words to be forbidden or people who use them to be "cancelled."  But people judge us, in part, on the words we use, so it is worth thinking about them.  Someone once asked the folksinger Fred Small if he was ever politically incorrect.  He replied: "Do you mean am I ever intentionally rude?"

The irony, of course,  is that a book whose avowed purpose is to stifle discussion is likely to spark many interesting conversations.