I don’t remember having much interest in crosswords or other word puzzles growing up, although I played SCRABBLE a few times with my grandmother – but she insisted on being able to use French, too, which put me at a significant disadvantage.  Somehow, the whole idea of crosswords left me cold, with finishing one only a “bleak satisfaction,” in my pal John Crowley’s phrase.

Then, in my early twenties, when I was in the military, I got hooked on the Jumble, which was a feature in Stars & Stripes.  The proximate cause was that we spent a third of our duty time on mids.  (Shift work is days, swings, and mids: 0800 to 1600, 1600 to midnight, midnight to 0800.  It messes with your sleep patterns.  Cops and firefighters, nurses and EMT’s, merchant seamen, anybody in a round-the-clock pursuit is familiar.)  In that dead time somewhere between 3 and 5 in the morning, before the Russian and East German pilots crawled out of their bunks and into the cockpits of their aircraft, and we were fruitlessly searching the VHF spectrum for signals, you needed a little something to stimulate your groggy synapses.

If you don’t know how Jumble works, it consists of four words with the letters scrambled.  You unlock GOTDYS, for example, to reveal STODGY, or APHISM as MISHAP.  Not always as easy as it looks, actually.  Sometimes you’d get stuck. 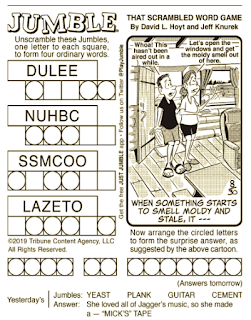 Then there was the second half of the game.  Each of the words you unscrambled had a few letters circled, and once you had all four words, you had another set of scrambled letters, which you matched to a clue for your final answer. 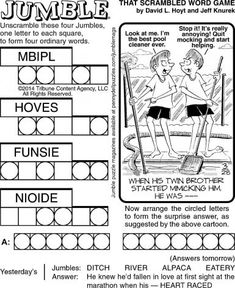 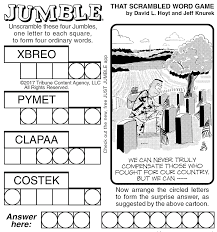 Further, solving the Jumble requires a paradigm shift.  The first part, rearranging the scramble of letters to produce a given word, is a left-brain exercise.  The second half, grasping the sense of the clue, in relation to the individual vowels and consonants, is more right-brain or intuitive.  It asks for a different discipline, not so much a logic puzzle as an empathic one: the whole, the gestalt. 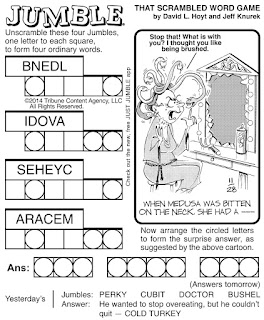 I still play the game on my cell phone, over coffee.  Some years back, I got a jolt of recognition when I read an interview with David Mamet, and one of the questions was about writers’ superstitions, or totems.  He said, if I can’t riddle out the Jumble first thing in the morning, the rest of my day is shot.  Gotta love it.
Posted by David Edgerley Gates at 02:00