So Many Murder Methods, So Little Time

How can I kill you? Let me count the ways.

Last month, I was on a Bouchercon panel titled What's A Weapon: Choosing Ways to Murder. We had a fun hour-long discussion of inventive ways to commit murder. You can watch it here. Knowing that my memory often isn't great, before the panel I made a list of all the murder methods I've used in my published short stories, as well as how many times I've killed someone that way. I read the list during the panel, omitting guns, knives, and poisons, because we'd been told the panel's focus was supposed to be unusual methods of murder. Guns, knives, and poisons were all been-there-done-that. But I like the usual methods, so here's my list, including guns, knives, and poisons (oh my!).

My preferred ways to kill (or at least go down trying) 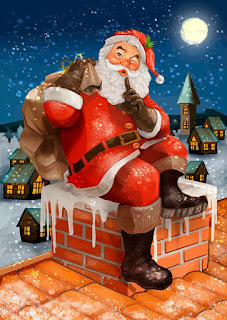 Strangulation: Four times (three with your hands, once with twinkle lights)

Hitting with a car: Three times

Bashing with a rock: Once

Bashing with a shovel: Once

Getting eaten by an alligator:  Once

Overdose of medication: Once

* I would never kill Santa. Well, probably not. But it was a good illustration for chimney asphyxiation.

They say that poison is a woman's game. For me, at least, that seems to be true. It's my go-to method. It doesn't require brute force, just the sneakiness and will to do it and the patience to wait for it to work. I have all of those qualities in abundance. I mean, my characters do. 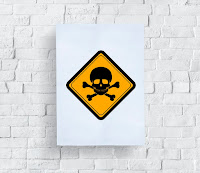 Trying to get someone to die from an allergic reaction is similar to killing via poison, since for the victim, the food or medicine would have a similar affect to poisoning. But while you could use a particular poison to kill anyone, killing via allergic reaction requires knowledge of the victim's allergy and how that allergic reaction could play out. Therefore, it requires more due diligence on the part of the killer. As such, I put it in its own category. You might categorize your murder methods differently, of course. I welcome your thoughts in the comments. Your local police department does as well.

Killing someone by shoving them down the stairs or accidentally tripping them is a wonderful method because it could be viewed as an accidental death. Of course, in fiction people probably die from falls much more often than happens in real life. In the real world, a person tumbling down a staircase might merely break a few bones and the would-be-murderer has to try again. So if you want to kill this way, make sure you have it in you to be persistent, because you very well may have to be.

Of course, some murders can't be planned. You have to take your opportunities when they come. So if you're lucky enough to have your stalker try to sneak into your house through your chimney and he gets stuck (look it up--people, burglars especially, get stuck in chimneys a lot), you could simply light a fire and wait for karma to play out. "I'm so sorry, officer. I had no idea someone was in the chimney. I was just cold." And sorry, I don't mean to make light of stalking. Funny how making light of murder doesn't bother me, but making light of stalking gives me pause.

Strangulation is another method of the would-be killer who's caught with an unexpected opportunity. You may not have a gun or knife on you when you find your evil mother-in-law alone, and she might not be loitering at the top of a staircase just waiting for you. But you always have your hands on you (I hope). Hands are so handy that way. (I know, that was terrible.) If you get the chance to strangle someone and you have a fun thing to do it with at your disposal--such as twinkle lights--I urge you to make use of it. Readers do want to be entertained. 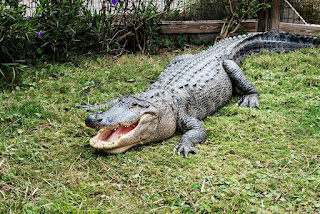 Some murder methods only happen in Florida. When I was a newspaper reporter back in the '90s, you often would hear about weird news stories that came over the wire. Inevitably, 99 percent of the time, they happened in Florida. It was such a regular occurrence that I bet you could tell any person who's worked in the media about a weird news story, and the automatic response would be, "Florida, right?" So when I wrote a story for the 2018 Bouchercon anthology Florida Happens, I came up with what I thought was a quintessential Florida murder method: a man tries to train an alligator that lives in the lake behind their house to eat his wife. And like murder via twinkle lights, it was fun to write. (Hmmm. That Florida story also involved pushing the wife down the hill toward the alligator. I didn't include that in my list--pushing someone down a hill. It needs updating. ... Done.)

I have some more fun methods of murder coming up in stories not yet published. But I don't want to ruin the surprise, so you'll have to wait.

In the meanwhile, I hope you have a wonderful Thanksgiving, and that you don't murder anyone in your family. As much as you might be tempted, murder really is best left for fiction.