by Michael Bracken
As I write this a few days before it appears, I have five full short-story manuscripts atop my desk. This is unusual. A full manuscript is usually only a thorough proofreading away from being finished and submitted, and I rarely let more than a few days pass before that happens. 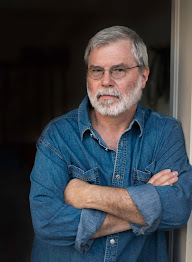 I completed full drafts of all five stories within the past month, and they remain unfinished due to some small, niggling doubt about each one. I’ve been struggling to determine what it is about each story that suggests it isn’t ready, or I’ve pinpointed the problem but not the solution.
For example, the first story is set in the 1940s, and I glossed over an event late in the story that deserves more than the few sentences I devoted to it. It deserves a complete scene, but to write the scene I need to research train engines of the time period and I need information about a specific train station. So, I am at the moment stymied by lack of research.
Another story is set partially in the 1930s and partially today. The portion set in the 1930s is fine as is; the portion set today reaches an unsatisfying conclusion. I’m uncertain if my lack of satisfaction in the conclusion is because it isn’t properly set up, because it’s poorly written, or because it’s the wrong conclusion.
The other three stories have their own problems: flat characters in what is, essentially, a gimmick story; missing information in a tale-with-a-twist story that would make the twist more satisfying; and a horror story my wife doesn’t “get,” and I can’t tell if the problem is in the story or if Temple—who doesn’t read horror fiction and doesn’t watch horror films—is the wrong audience.
TOUCH-A, TOUCH-A, TOUCH ME
Instead of working to resolve the minor issues with these stories so I can send them out to visit editors, I have, instead, kept plowing forward with the completion of new work. I have several partially written stories—all begun before the world turned upside down—and most of the stories I’ve completed the past several months came from this pile of partials.
I often work this way, with multiple short stories and other writing projects in progress, and I bounce back and forth between them. Already today—it’s pushing four o’clock—I’ve completed a full draft of a story, made progress on a second story, and wrote most of this.
I have a handful of other stories in progress that I touch frequently, sometimes adding only few words or notes about scenes to come or plot points that need to be incorporated. I have another dozen or so that I touch less frequently, and I have hundreds that I haven’t touched in a while. All of these could, and likely will—should I write fast enough or live long enough—become stories that I ultimately finish and submit.
THRILL ME, CHILL ME, FULFILL ME
I don’t recommend my process to anyone, and I’ve lately attempted to alter it given how life has changed during the past several months. Early in my writing career, when I juggled family, full-time employment, and all that comes with each of them, I often wrote in short bits of time. For example, I wrote during my lunch hour, and the story I worked on during lunches was rarely the same story I worked on before or after work.
Recently, I’ve had a few day-long blocks of time. At first, I didn’t know how to effectively utilize such large blocks of time. So, my attention bounced from social media to writing to household chores to writing to errand running to writing and I wasn’t accomplishing near as much as I desired.
So, I tried to intentionally structure a few of my days. I ensured that I had no chores or errands, intentionally avoided social media, and planted myself in front of the computer shortly after breakfast. I selected a single story each day and worked on it until I had a full draft or had gone as far as I possibly could. If time remained in the day, I then began work on a second story.
This has worked spectacularly well the few days I’ve been able to structure my days in this way.
On the flip side, I now have five full short-story manuscripts that require something more than a final proofreading pass before heading out the door.
Perhaps I need to select one day and proclaim it as a problem-solving day. Perhaps I’ll structure it much like the writing days I’ve had recently—no errands, no chores, no social media, and at the computer right after breakfast—except that my goal will be to select a full manuscript, wrestle with it until I’ve solved its problems and, if there’s time, do the same with a second story.
Yeah, that’s what I’ll do. 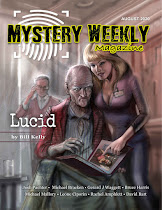 August 1 was a good day. My story “Bone Soup” appeared in the August issue of Mystery Weekly and “Jalapeño Poppers and a Flare Gun,” which I co-authored with Trey R. Barker, was released as the eighth episode of the serial novella anthology series Guns + Tacos. 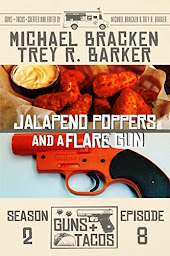