Joseph Pittman is a friend from about the time we opened bookstore in Austin, called Mysteries and More. I was writing a column for Mystery Scene magazine called Southwest Scenes. I had also started going to Mystery Cons in order to meet authors, agents, booksellers, editors, publishers in person, because I used their information for my column.

Joe Pittman was one of the big name editors I telephoned on a regular basis. He would tell me which books were ready for release. Joe was always helpful, giving me reliable info and we usually spent a few extra minutes chitchatting. We finally met in person in St Louis, MO when Bob Randisi put together and hosted a PWA CON, the first ever conference for private eye writers.

I knew Joe had left publishing because he wanted to write and write he does. He's published more than a few books. We reconnected on FB a couple of years ago. Then, a little over a year ago, Joe and his husband Steve adopted Shadow. And Shadow, a black lab youngster, soon learned to type on Daddy Joe's computer. Shadow began a diary. Talked about settling into a new home with a nice back yard to play in and how he's learned new words and how to play with other families, making friends with other dogs. And especially learning about love. Daddy Joe compiled Shadow's diaries into a book, and Daddy Steve did the cover artwork. It's a small but very entertaining and charming book for all animal lovers.  I highly recommend it.

Hey, Pittman here. It’s midnight while I write this. The moon owns the night. There’s a pretty dame walking down a dark avenue. A handsome lad in a fedora trails her. My eyes don’t judge either. They just wonder what each is hiding. Probably truth.


Whoa, what’s going on? Have we finally gotten to a diary entry that focuses on the classic American detective novel? Is it noir week? Yeah, sweetheart, it sure is.


You can do a wayback and think about Chandler, Hammett, Cain. They created a genre steeped in language people hadn’t read before. Grit, gumption, a different way of seeking justice. I’ve read ‘em but was never involved in any reissues of their iconic novels.


But I did get to work with some of the giants of the mystery world. it’s interesting to think how they helped shape me as a writer. So, I’m going to focus on four authors, some you may have heard of, all who bring a unique spin to the crime genre. What they have in common? They always let you know whodunit.


I’m gonna start with the Grandmaster. The one and only Mickey Spillane. Back before publishers did hard/soft deals, back before all the mergers, a hardcover publisher would sell the softcover rights to a paperback publisher. And one of the most loyal arrangements was that between E.P. Dutton and Signet. Their star author? The great Mickey Spillane, creator of Mike Hammer. I, The Jury put all three on the map. Hammer was tough. Spillane’s language was hardened poetry.


In the 1990s, Mickey, after a silent period, resurfaced with a new novel, Black Alley, the return of Mike Hammer. I had the privilege of working on this book, but more than that…I got to meet Mickey. He was being named Grandmaster from the Mystery Writers of America, their highest honor. Mickey came to the office that day for a champagne toast.


I remember him telling me I wasn’t born when Hammer was taking his first punch. It was the perfect introduction. He’d brought along with him “the dame,” a lovely woman who had starred with him in those Lite Beer commercials in the 70s. Then we all went to the Edgar Awards banquet, NAL having secured a table to celebrate our Grandmaster. I couldn’t believe I was his editor. But I experienced that feeling a lot over my career, which brings me to a twist in the noir. Lawrence Block (another Grandmaster) is a gentleman, a scholar, and a bit of a schemer! I’d known his Matthew Scudder detective series, but he also had a lighter side. Enter Bernie Rhodenbarr, bookseller and thief, into my life. Dutton/Signet, now fully merged, was offered the opportunity to revive this comic crime series, starting with the first book in ten years, The Burglar Who Traded Ted Williams.


This series became one of my favorite adventures in publishing, and certainly gave me some credibility in the mystery community I loved being a part of. We ended up republishing the first five books, in both hardcover and paperback. Then we published four more new titles. The Burglar in the Rye features a dedication…to me. A treasured moment when I saw that.


To say Bernie inspired my Todd Gleason character is an understatement.


Then there’s this guy, Max Allan Collins. Another genius of detective fiction. I first learned of him when I worked at Bantam. A book called Stolen Away, a historical mystery about the Lindbergh kidnapping. Later, when at NAL, we acquired his Nathan Heller series and went on to publish six titles. Nate was always getting involved in mysteries of the past, helping to solve the unsolvable. His attention to detail, his cleverness, but ultimately his prose, absorbed me. 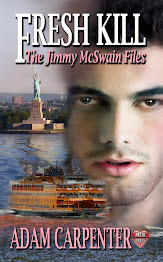 Lastly, I want to talk about the Gatekeeper of all this history with his devotion to detective fiction. Robert J. Randisi. He is the founder of the Private Eye Writers of America, which awards the Shamus for the best in American detection. I did several anthologies with Bob, memorably a collection of Shamus-winning stories called The Eyes Still Have It. Randisi has published so many books in so many genres, it’s hard to keep track. If I learned anything from him: stay prolific. Finish writing a book, there’s another waiting behind it.


The detective novel is quintessential American. It’s about mood, about voice, it’s about characters who might have been damaged by life, men and women who are looking for solutions on the streets. But ultimately finding their redemption within their own hearts. Motive isn’t just something to uncover in a suspect. It’s something to find within your hero.


At the PWA conference in St. Louis in 1999, I was surprised and humbled to receive a plaque from Bob. “Friends of PWA.” I still am, and I’m grateful to these four talented authors for taking me on their journeys. Truthfully, my P.I. Jimmy McSwain doesn’t exist without any of them.