My last piece on SleuthSayers talked about nailing a story, getting goosebumps when you reread a story you've written before you send it out, a story which ended up better than you thought it would, a story you nailed.

Today, I'll talk about stories which nail you – hardheaded stories who fight you from the first paragraph.

In my 34-years as a pro writer, I've learned to never give up on a story, even the ones that don't work, even the story where you end up in a corner you can't get out of and you look around for Rod Serling because you're in the Twilight Zone.

I've worked hard on a number of stories which didn't come together. So what to do? First, I let it sit and move on to something else. When I go back and re-work it and it still doesn't work, I let it sit some more. I go back again and after a third strike, I study the piece and see if I can slip it into a novel. Most of the stories which nailed me are more scenes than stories and novels are made from scenes.

To my delight, I've been able to slide stories that nailed me into novels in progress, sometimes taking the novel in a different direction or relieving pressure in a story line or bringing a new twist to the novel.

It's all part of the creative process, a giant pot of gumbo stirred into something which works. I've seen it and when it's unplanned, it's extra cool.

If I write it, it's part of me and may sit a while but I'll find a home for it. 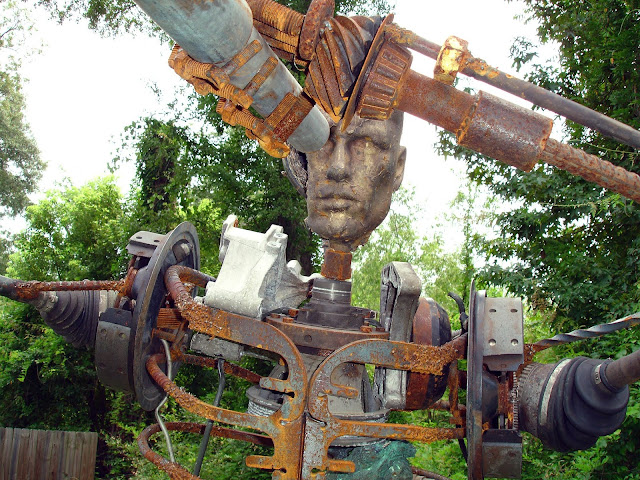 MacKenzie sculpture by Vincent De Noux from pieces of junk