I Miss My Summers With Mr. Poe


by Joseph D'Agnese
“Whenever I go back to Charleston, I think of Poe,” Pat Conroy’s narrator says in the opening to The Lords of Discipline, and I sorta, kinda know how Will McLean feels. Edgar Allan Poe was a fellow who was constantly on the move—evading creditors, chasing gainful employment, trying to get his sorry ass paid—but he doesn’t immediately spring to mind whenever I am in cities like Boston, New York, Philadelphia, or Baltimore. 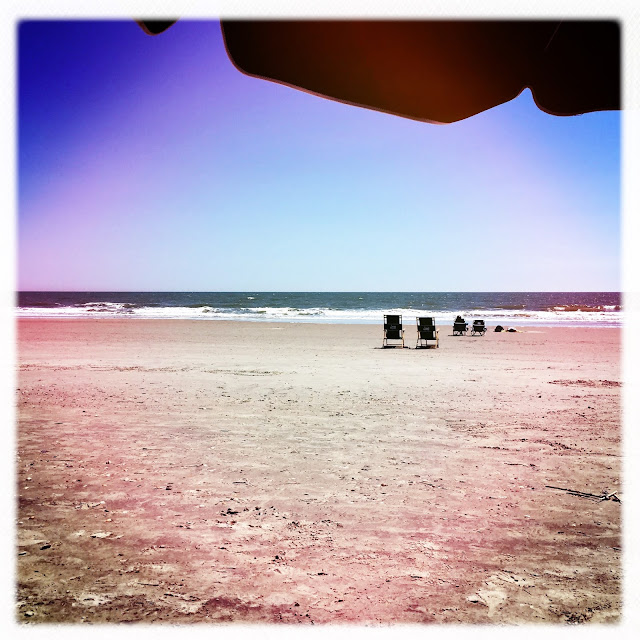 But on those hot, humid summer days when Denise and I have escaped to the South Carolina beaches which are closest to our home in Western North Carolina, I cannot help think of Poe. He was barely 19 years old when he signed up for a five-year enlistment in the army, and ended up transferred from Boston to Fort Moultrie, on the very tip of Sullivan’s Island, South Carolina. The fort was built in 1776 to defend Charleston from British attack, and wasn’t decommissioned until 1960, 184 years later. Moultrie is famous for being built out of felled palmetto trees (South Carolina’s beloved state tree). Those truncated trunks were so spongy that British cannonballs bounced right off ‘em.


Poe was on Sullivan’s for all of 13 months, from 1827 to 1828, before finagling a way out of his five-year commitment to attend West Point. At Moultrie he worked as a clerk. They needed a man who could read and write, and that was certainly our boy Eddie’s wheelhouse. Though he managed to rise in rank from a private to a regimental sergeant major, the highest post a non-com could attain, he never answered to his real name. See, while in the army, he called himself Edgar A. Perry. By one biographer’s estimation, it was his fifth such alias, donned to ditch creditors he’d left behind in Richmond (where he’d gambled away $2,000 he didn’t have) and Boston (where he’d just self-published his first book of poems), and heaven knows where else. 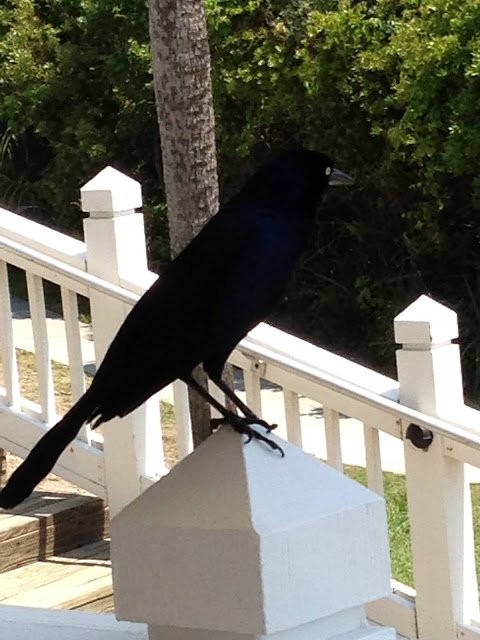 Years later, the time he spent in the Charleston area blossomed into three different stories. The most famous of these three pieces—and the most celebrated in his lifetime—was “The Gold Bug,” first published in three installments in 1843. It’s often lumped in with his detective stories because the main character treats us to feats of ratiocination, but don’t get hung up on that. It’s a buried treasure/secret code story, complete with long discussions of alphabetic frequencies, references to Captain Kidd’s gold, a mysterious gold-winged beetle, and a Black sidekick who speaks in what today reads as racially offensive dialect.

In 1840, while an editor at Alexander’s Weekly Messenger in Philadelphia, Poe challenged readers to stump him by submitting their best cryptograms to the paper. Cryptographic puzzles were a hot genre at the time. He promised to decode each and every one, no matter the difficulty. Of course, you’d have to keep buying the paper to see if the editor picked your code, and if he had been able to “unlock” it. Week after week, Poe always did. Either he was a genius, or he banked on the fact that most semi-literate Americans of the 1840s were only capable of one type of code: the substitution cipher of the A=1, B=2 variety. “I have lost, in time, which to me is money, more than a thousand dollars in solving ciphers,” he would later gripe.

In the story, he describes Sullivan’s Island this way:


“This island is a very singular one. It consists of little else than the sea sand, and is about three miles long. Its breadth at no point exceeds a quarter of a mile. It is separated from the mainland by a scarcely perceptible creek, oozing its way through a wilderness of reeds and slime, a favorite resort of the marsh-hen...

Near the western extremity, where Fort Moultrie stands, and where are some miserable frame buildings, tenanted, during summer, by the fugitives from Charleston dust and fever, may be found, indeed, the bristly palmetto; but the whole island, with the exception of this western point, and a line of hard, white beach on the sea-coast, is covered with a dense undergrowth of the sweet myrtle so much prized by the horticulturists of England.”

“The Gold Bug” was insanely huge in its day. The Dollar Newspaper paid Poe $100 ($3,400 in 2020 dollars) for the piece, the most he likely ever made from any of his stories. The tale was printed at least five times by the paper, was spun off into a terrible play, sparked a quickie pamphlet of Poe tales, and launched its author on a brief speaking career. Alas, pirated versions sold 300,000 copies—none of which profited Poe a cent. Because of course they wouldn’t. Our Eddie had a date to keep with poverty, misery, and the gutter.

Modern Sullivan’s Island is pristine, pricey, and popular with beach-trekking fugitives from nearby Charleston, Mount Pleasant, and from anywhere up and down the East Coast, really. Nearby Gold Bug Island is the site of fancy lowcountry weddings. Beachfront property sells in the millions. Fort Moultrie is a National Historical Park whose gift shop sells Poe paperbacks and tedious nonfiction about the outpost’s strangest literary resident. Summer parking on “SI” is near impossible, but maybe you’ll get lucky and get to park your rental car or golf cart on Goldbug Avenue, or Raven Drive, or the main drag, Poe Avenue. 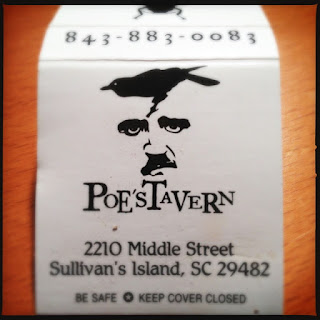 You might be moved to browse the books at the Edgar Allan Poe Branch of the Charleston County Library, housed in a four-gun military battery that dates to the Spanish-American War. Perhaps you will buy your sweetheart something shiny at the jewelry store called Goldbug. Or else you will wait until they call your name and seat you inside or on the sunny porch of Poe’s Tavern, on Middle Street, where the walls are decorated with the most massive collection of Poe art, movie posters, and old magazine ads imaginable. (Who knew that the cousins behind Ellery Queen did Poe-centric ads for Ballantine Ale back in the day?) The tavern’s owners operate two additional locations in Wrightsville Beach, North Carolina, and Atlantic Beach, Florida.


There are no fewer than 10 burger or chicken sandwich varieties on the menu, ranging from the Raven to the Gold Bug, the Gold Bug Plus, the Pit & Pendulum, the Amontillado, the Annabel Lee, the Hop Frog, the Black Cat, and the Sleeper. I usually go with the Tell-Tale Heart: a big-ass burger with a fried egg, bacon, and cheddar. I wash it down with a Poe lager, and we do not depart those shores until I have bought yet another Poe’s Tavern T-shirt. What does it say about me that most of my clothing these days has originated in bars? Perhaps Poe is not the only one destined for the gutter. But, ahem, I digress.


If Poe saw his little sand spit today, and beheld his twitchy face painted onto the bricks above the fireplace in the tavern, he would probably threaten a lawsuit—for slander, libel, copyright infringement—as was his wont. In distant realms now, he probably confers daily with recently departed licensing attorneys. 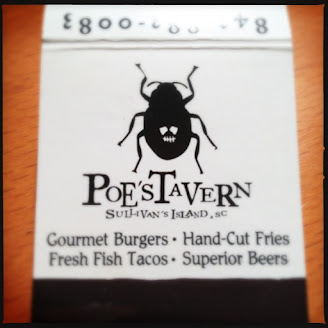 Perhaps some summer when our own hideous bug becomes less horrific, I will meet you all on Eddie’s not-so-forgotten island. Until then, I leave you with a touch of Conroy’s poetry on the subject. The Lords of Discipline passage concludes thusly:


“I like to think of [Poe] walking the streets of Charleston as I walked them, and it pleases me to think that the city watched him, felt the shimmer of his madness and genius in his slouching promenades along Meeting Street. I like to think of the city shaping this agitated, misplaced soldier, keening his passion for shade, trimming the soft edges of his nightmare, harshening his poisons and his metaphors, deepening his intimacy with the sunless wastes that issued forth from his kingdom of nightmare in blazing islands, still inchoate and unformed, of the English language.”

I’ve been on a Poe kick recently because one of his longtime editors, the self-described “editress” of Godey’s Lady’s Book, Sarah Josepha Hale, is the subject (along with the Civil War, Lincoln, and the creation of the Thanksgiving holiday) of my wife’s next book.

The book doesn’t pub until November, but Dutton just released the cover this week. In the months to come, I’ll share more about what I’ve learned about Mrs. Hale’s strangest contributor.

See you all in three weeks! Until then, you can find out more at Denise’s website. 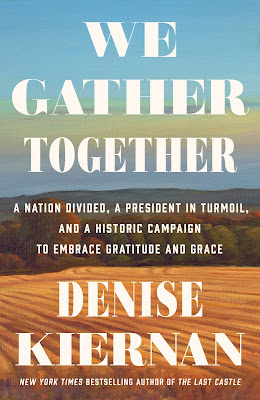