If you like reading crime short stories, and let's face it, you wouldn't be a regular SleuthSayers reader if you didn't, then you should know about Black Cat Mystery & Science Fiction Ebook Club. An offering of Wildside Press--which publishes a lot of mystery anthologies, including the Malice Domestic anthologies since their revival a few years ago and this year's upcoming Bouchercon anthology--the ebook club is nearing its third anniversary. It's like a book-of-the-month club, but weekly and with electronic short stories (and some novellas), mostly reprints. The ebook club is different from Black Cat Mystery Magazine, which is edited by my fellow SleuthSayer Michael Bracken, though the quarterly magazine is sometimes included as a weekly offering to the ebook club members.
Every week, paid club members get an email telling them about the seven (sometimes more) stories they can download that week in mobi or epub versions. Three or four are crime/mystery stories, the rest are science fiction. Unpaid club members get the same weekly email giving them access to one free story, a specific one each week. All of the ebook club stories are available for two weeks only, giving members an incentive to check in each week (or every other one) to download the new offerings.

A lot of the mystery stories are traditional, in the classic mode, originally published early in the twentieth century. But in June, Wildside began including a contemporary story with the mysteries each week. It is these modern stories with which I'm most familiar because I'm the person who's been choosing them. In the spring, Wildside's publisher reached out to me, asking if I would head up this series of stories, finding reprints I thought were really good. He's labeled this imprint Barb Goffman Presents. (That was a big surprise--a nice one--because I thought I was going to be solely behind the scenes.)
Since then I've read more short stories than I have in years, trying to find ones I love and think would be a good fit for Black Cat readers. (Stories originally published by Wildside Press are off the table.) When I find a story I think would work, I reach out to the author. It makes me feel like Santa Claus, which is pretty cool. 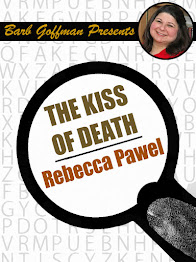 This work has given me an excuse to read many of the anthologies that I bought over the years but never found the time to read. And it's enabled me to share with readers stories that I think are special but might have been overlooked when they came out.
The first story I presented was "Debbie and Bernie and Belle," written by my fellow SleuthSayer John Floyd and published in 2008 in the Strand Magazine. Last week's story, which is still available to paid club members for a few more days, is "The Greatest Criminal Mind Ever" by Frank Cook, originally published in 2009 in Quarry (Level Best Books). And this week's story, which has been chosen as the week's free story for paid and unpaid members, is "The Kiss of Death" by Rebecca Pawel, originally published in 2007 in A Hell of a Woman (Busted Flush Press). Pawel's story is set in the New York City tango community and is a delight to read.
If you want to check out the ebook club, go on over to https://bcmystery.com/. And happy reading!
Posted by Barb Goffman at 00:00