Fleshing Out The Past 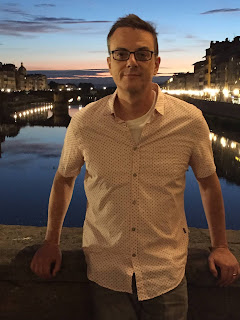 I met Lawrence at Bouchercon in Long Beach years ago and we hit it off. His gripping and eccentric stories have appeared in 44 Caliber FunkandOrange County Noir. He scripted the Hong Kong kickboxing flick RAW TARGET andthe indie musical OPEN HOUSE (and how often have you read about those two genres in the same sentence?). PUBLISHERS WEEKLY called his FAST BANG BOOZE (published earlier this year by Shotgun Honey),"offbeat noir." I called it "a wild ride."Please give Larry a warm SleuthSayers welcome! - Robert Lopresti

FLESHING OUT THE PAST


Ian Fleming once surprised a Polynesian dancer by reaching out and touching her while she was performing. It’s not noted where, exactly, he touched her. As for why: he was doing research. Through travel, research, and first-hand knowledge, Fleming loaded his Bond novels with sumptuous detail. He was one of the first authors to use actual product names in his fiction. Fleming was a master at describing the world he lived in, but what are the tools an author uses to flesh out the past when, unlike Fleming’s dancer, it’s no longer there for one to touch? I asked crime fiction authors Christa Faust, Robert Lopresti and Paul D. Marks how they brought the once-was into the right-now.

Before New York’s Times Square was cleaned up in the 1990s, it was a sleazy and dangerous place. Travis Bickle’s “All the animals come out at night” monologue from Taxi Driver sums it up. Christa Faust, Gary Phillips (and artist Andrea Camerini) faithfully recreate Times Square, circa 1986, in their thrilling graphic crime comic Peepland (Titan Comics, collected as a paperback, 2017). Roxy Bell is a Times Square peepshow worker, performing one-woman sex shows behind a glass window. Powerful forces will stop at nothing to retrieve a criminally incriminating VHS tape that has fallen into her hands.

“Peepland is based on my own lived experience as a kid growing up in Hell's Kitchen and as a young woman working in the Times Square peep booths,” Christa says. I consider the rich and authentic rendering of Times Square, and ask Christa if she needed to do any research for Peepland. “No research was necessary, just memories.” In an interview with Crime Fiction Lover, Christa explained that “all of the characters are based on real people I met while working in the peep booths. The central main character Roxy Bell is definitely semi-autobiographical.” In the same interview, Christa succinctly said why memories of Times Square were all she needed to create Peepland: “It’s in my blood.”

Roughly two miles away and two decades earlier, Greenwich Village was the epicenter of American folk music, a movement in sound that put political dissent on the airwaves. In Robert Lopresti’s evocative murder mystery Such a Killing Crime (Kearney Street Books, 2005), coffeehouse manager and war vet Joe Talley sifts through the many characters circling the folk revival scene in search of the murderer of his friend, an up-and-coming folk singer. Robert gives a sightseeing tour down MacDougal Street, detailing the people and points of interest along the way. Folksinger Tom Paxton, who makes a cameo, said of Robert’s writing, “If I'd known he was watching us all so carefully, I'd have behaved much better.”

I ask Robert how he brought 1963 Greenwich Village back to life. “Since I’m a librarian the obvious answer was research. That was more challenging than I expected because all the New York City newspapers were on strike that spring. The Village Voice was the main source of information.” Robert says he also spent hours at the Lincoln Center branch of the New York Public Library scouring the main folk rags of ‘63, Sing Out! and Broadside. Robert was after more than just facts in his research. “I got to interview several people I knew who lived in that time and place. That was partly to get facts but mostly to get feelings. What was it like? What did they remember the most vividly about that time? Then there was the matter of trying to think like an early sixties person. Women were ‘girls,’ whatever their age. Smoking in a hospital was perfectly normal.” I ask Robert if his research forced him to rethink past assumptions. “I was well into editing before an article in a recent newspaper pointed out that back in 1963 women were not allowed to drink in most bars in the city! After confirming that with a woman I know who went to school there I had to rewrite a whole lot of scenes. But part of the fun of the book is showing you this strange and distant culture.”

Paul D. Marks explores early 1990s Los Angeles in his two Duke Rogers private eye novels White Heat (Down & Out Books, re-issued 2018) and Broken Windows (Down & Out Books, 2018). In White Heat, Duke finds himself in the heart of the 1992 LA riots while investigating the death of an actress. Broken Windows, occurring two years later, has the Prop 187 battle over illegal immigration as the backdrop. Marks grew up in Los Angeles, and his Duke Rogers books explore how myth and memory are at odds with the often violent, seedy and corrupt LA that Duke encounters while plying his trade.

“The Internet, as well as memory, comes into play to try to get the reality of that time, but even with a good memory it’s wise to verify with multiple sources.” I ask him if there were any challenges recreating the not-so distant past. "In some ways it’s

almost harder to write that than something set in the more distant past.” Earlier in the 20th century “there were no cell phones, personal computers, answering machines or televisions at home. But all of that stuff existed in the ’90s, but in very different form than we have today. So, while someone might have had a cell phone it looked different and worked differently – some of the early ones were as big as walkie-talkies. Same with computers. So you have to be careful if you lived through that era not to transpose modern versions of the technology onto the tech of that day.”

I had similar issues with my novel Fast Bang Booze (Shotgun Honey, 2018), which takes place in the early 1990s as well. I had to rethink a lot of what I thought I remembered about cell phones from that period. A fun cell phone fact: the first commercially available handheld cell phone (made by Motorola) was nicknamed “The Brick,” and cell phones pretty much kept that design until smaller flip phones came along in the mid-nineties.

Paul D. Marks and I are both native multigenerational Angelenos, and we’ve had that “Do you remember” conversation a few times. LA, as well as being a sprawl, is also the kind of city that lets a legendary place like Schwab’s get torn down and be replaced by a Crunch Gym, so sometimes the landscape of our memories doesn’t overlap. When I’ve met fellow Angelenos and we realize that we’ve both been to the same forgotten dive bar or long-gone taco truck, there’s a bond. We belong to a dwindling club, and when the last of us shuffles off, it will be like a point in time and place has been wiped off the map.

When I wrote Fast Bang Booze, I wanted to impart what it felt like to be young, barhopping, and maybe a little out of control in the early ‘90s in LA. I just couldn’t do it all from memory, because my protagonist (a grungy twenty-something with a fantastically souped-up nervous system) is a fictional construct, and my tale is pure pulp. I had to do my research, which included buying old issues of LA Weekly and re-reading old diaries. Like Robert Lopresti, I even interviewed people. I wanted the facts and the feel.

I drove to Salt Lake City some years ago for a job. When I unlocked the door to my hotel room and stepped in, I was hit with the odor of cigarettes and Glade air freshener. It struck me in a way I still marvel at today. I would walk to my Grandmother’s house everyday from elementary school, and that was exactly how her place smelled. I swear for a moment I could picture all the objects in her living room, down to the glass fish statuette with the green tint. However briefly, I could feel the past. A piece of writing that can accomplish what Glade and cigarettes did for me, bringing the past alive, is powerful indeed.
Posted by Robert Lopresti at 00:00