How B Is Your SP? 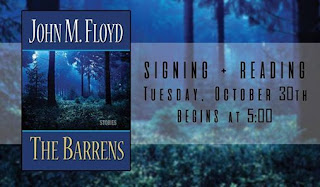 This past Tuesday night I attended the "launch" of The Barrens, my seventh collection of short mystery fiction, hosted by Lemuria Books in Jackson, Mississippi. It was a fun evening, with a (thankfully) good crowd and a lot of old friends and fellow writers; I signed at five o'clock and then did a reading and Q&A. My publisher always considers the date of the Lemuria launch event to be the release date of the book, so he waited until afterward to get copies to the distributors for other area bookstores. (I did cheat a little, though: a few weeks ago Michael Bracken and I participated in the Bayou Writers Group conference in Lake Charles, Louisiana, and since this was out-of-state I was allowed to take copies of the as-yet-unreleased book along to sell at the conference. Maybe not as exciting as the early release of a new iPhone, but still . . .)

Anyhow, we had a good time at the book launch, and the whole experience reminded me how we writers not only have to write--we have to promote as well. And I'm not good at promoting. I have nine or ten more signings scheduled between now and Christmas (most of them at Books-A-Millions on weekends), and I always enjoy those because it's a chance to see old acquaintances and make new ones, as well as sell books. But arranging all this and publicizing it isn't fun, for me. On this particular occasion earlier this week, it was especially hard because my mother had passed away a little more than a week earlier, and my heart just wasn't in it. I wound up not having the time to mail out any written invitations--I sometimes do, because I have a few friends who don't like computers or social media--and ended up sending out only a few emails and Facebook messages and posting the event on my FB page a couple of days beforehand.

I'm fortunate in that my great publisher handles most of the publicity and advertising, produces and furnishes my bookmarks, brochures, posters, press releases, etc., and sets up my interviews and events. He not only enjoys doing that, he has the contacts and he's extremely good at it. He's the main reason my book launch was successful. Don't get me wrong--I have the utmost admiration for fellow writers who self-publish and thus pretty much do everything themselves. But doing everything would be hard for me. I'm afraid I just don't like the "business" side (the non-writing side) of writing. 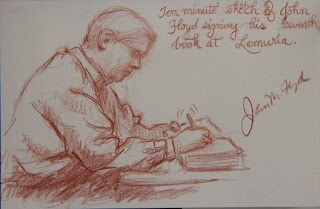 An unexpected sketch by my friend Bill Wilson, at my "launch" signing.

Back to the subject: My signing event the other night, and all the preparation and commotion involved, made me wonder--not for the first time--how much promotion is too much promotion? On the one hand, I owe it to my publisher, and to myself, to help make sure the word gets out and to try to make the new book as successful as possible. That's common sense, and good business. I certainly want it to be successful. On the other hand, I don't want to be a nuisance. In a world where we're bombarded daily with phone calls from telemarketers, endless commercials on TV, and newspapers so packed with advertisements it's hard to lug them into the house from the driveway--well, folks who sell things need to tread softly. And I think we probably agree that there's a fine line between being informative and being a pain in the ass.

We all joke about BSP. Everybody knows, by now, that we're not talking about the Bulgarian Socialist Party or Business Systems Providers. We use the abbreviation often, and playfully admit that our self-promotion is blatant in order to somehow lessen its aggravation--but it can still be aggravating. At best, the reader/listener welcomes the news, sometimes he sighs and endures it, and at worst he flees from the room and runs screaming down the street.

Remember, BSP is a slippery little devil. If you watch closely you can catch it sneaking its way into regular conversations and otherwise unbiased pieces of writing. Example: the first paragraph of this column, which I wrote as a sort of an introduction to today's topic, is thinly disguised BSP. So is the sketch I included, above. Look at me, everybody--I've got a new book!

But let's face it, self-promotion is necessary, at least to some degree. Not many people are fond of blowing their own horn, but even in the midst of the groaning and eye-rolling from your audience, one fact remains: if you don't blow your horn, who will? My publisher, as effective as he is, can only do so much. The rest is up to me. 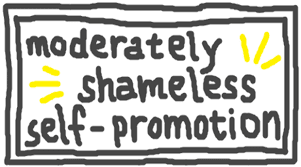 So here are the big questions. How much promotion do you feel comfortable doing? How far are you willing to go to ensure that your name and your product are recognized and will be successful? What part of it makes you uncomfortable? What's the right mix?

They're tough questions to answer. A lot of it depends on your personality. A shy, amateur writer will have a harder time crowing his message from the rooftops than, say, a writer who's a former salesman or politician. And on the receiving end of that, some of us have lower annoyance thresholds than others. Personally, I really want to know when new books are coming out by Stephen King and Lee Child and Joe Lansdale, etc., and from most of my writer friends. Books by other folks . . . well, I don't much care. And hearing about it too often is irritating.

I'd like to find out before my next book release.