Call it the Uncertainty Principle.

The theory was sound, the practical applications needed work. Leo Szilard, the Hungarian-born physicist, wrote a letter to President Franklin Roosevelt and got Alfred Einstein to sign it. It was August, 1939, and Germany invaded Poland in September. Szilard's letter made three main points. A nuclear chain reaction, using a critical mass of uranium, would release enormous energies. (It hadn't happened yet, but Enrico Fermi succeeded in 1942.) Second, the principles of nuclear fission could be used to make a bomb. And last, the Germans were already working on it.

The three most famous names in world physics in 1939 were Einstein himself, who was teaching at Princeton, Niels Bohr, in Copenhagen, and Werner Heisenberg, developer of quantum mechanics, at the Kaiser Wilhelm in Berlin. They knew each other's work well, they were part of the same community of ideas, and Bohr in fact knew the other two men personally. The war fractured their dynamic.

You have to understand something else, which is completely unscientific and counter-productive, namely that race hatred, anti-Semitism, was fundamental to Nazi beliefs. The movement known as Deutsche Physik argued against theoretical physics, particularly quantum mechanics and relativity. A guy like Heisenberg was tainted - he was a 'White Jew,' meaning an Aryan with Jewish sympathies - and as ridiculous as this seems, it crippled German science and the German war effort. Small favors, it turns out.

In the event, it wasn't until 1942 that Heisenberg got the ear of Albert Speer, the Minister of Armaments, and made his case for the Uranverein, the atom project. Heisenberg told Speer an atom bomb couldn't be built for some years yet, and even then with an enormous diversion of resources: money, materials, and manpower. It was more practical to focus on nuclear power generation, to think in terms of what industry required. Heisenberg's argument was persuasive. Speer put weapons research on hold, but he didn't stop funding nuclear power research, so it was still considered vital to the war machine. Hold that thought.

We have to roll the clock back to September, 1941. Heisenberg went to Copenhagen, and talked to Niels Bohr. There are conflicting accounts. Heisenberg seems to have been feeling Bohr out. The question is, what result was Heisenberg looking for? The least flattering interpretation is that Heisenberg was trying to recruit Bohr to work for the Nazis. More charitably, Heisenberg might have been voicing his own conflicted views, that an atom bomb was possible, but didn't a scientist have a moral obligation not to build it?

Bohr managed to be willfully obtuse, and said after the war he never understood why Heisenberg had come to see him in the first place. Bohr escaped occupied Denmark a couple of years later, to Sweden, and then to Britain, courtesy of SIS. He went to the U.S., and visited Los Alamos several times. He knew an atom bomb was perfectly feasible. "They didn't need my help," he remarked.

So what else do we know about this? At the end of the war, the Alsos Mission - organized to monitor the German atom project - reached Haigerloch, and found both Heisenberg and the experimental reactor his team had built. Heisenberg and nine of his colleagues were interned in Britain, at an SIS safe house wired for sound. The transcripts indicate the Germans never tried to build a bomb, only an atomic pile, for energy. Heisenberg says it would have been ludicrous for him to suggest assigning a hundred thousand men to a job with no guarantee of success. In other words, it wasn't a sure thing.

There's some wiggle room, here. Thomas Powers, in his book Heisenberg's War, doesn't doubt Heisenberg knew how to build an atom bomb, or knew which direction to take. Trial and error might have gotten him there, they way it did Oppenheimer's team in Los Alamos. Certainly a lot of the motivation for the Manhattan Project was the suspicion that Germany was mounting a similar effort. Powers argues that Heisenberg dragged his feet. He told Albert Speer it wasn't practical. He said it would take too long, that it would eat up needed war resources. He didn't come right out and say it wasn't possible, he didn't want to be shut down completely. He kept his hand in. He knew at each and every moment exactly how far they'd gotten.

None of the principals ever said so afterwards, not that we know of, but the evidence suggests Heisenberg committed treason. He very possibly lost the war for Germany. He didn't build an atom bomb for one simple reason. He didn't want Hitler to have it. 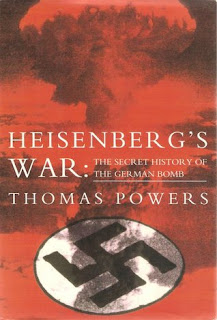 A Gripping piece of history. How the bomb came to be is so interesting and frightening. Thanks for putting this up.

You might find Philip Ball's Serving the Reich interesting as it is a very fair minded account of the German atom scientists. he is less favorable to Heisenberg than Powers, but personally I find Heisenberg's situation very fascinating. He was definitely a man of the Right and a big German nationalist- he was in a White Militia when he was only 17. On the other hand, post war he was nearly killed by the SS on his way home and he was apparently frightened even when he was interned at Farm Hall in the UK that he would be blamed for losing the war, for failing the science - or for aiding Hitler. His position was extremely delicate throughout the war and the post war, too.

There's a famous play, "Copenhagen" by Michael Frayn (I've been trying to get the DVD for years from Netflix) about the meeting. A quote from it:
"No one understands my trip to Copenhagen. Time and time again I’ve explained it. To Bohr himself, and Margrethe. To interrogators and intelligence officers, to journalists and historians. The more I've explained, the deeper the uncertainty has become. Well, I shall be happy to make one more attempt."

Anyway, it is one of the great mysteries of WW2, along with why on earth did Rudolf Hess fly solo to Great Britain? Was it really to negotiate peace? Or was it to get the hell out while the getting was good?

Heisenberg, orginator and practitooner of the Uncertainty Principle, in more ways than one.