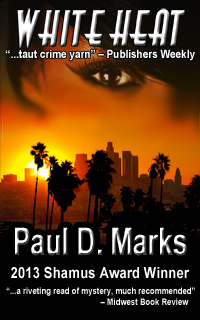 I cannot tell a lie, this piece has been published before in a couple of different places. Nonetheless, it has a lot of personal meaning for me, as well the larger societal context. My novel White Heat was partly inspired by the Rodney King riots and both that and the Watts Riots have helped to shape L.A. as it is today.

1965: "Burn, baby, burn!" is the anthem that many remember the Watts Riots by. It is the chant shouted by people as the city burns. The spark that sets off the riots is a black man being stopped for a traffic ticket. Long-simmering frustration boils over and the city ignites. Thirty-four people are killed, a thousand-plus are wounded and almost four thousand arrested. Tensions in Los Angeles are as high as the smoke rising from the smoldering city streets.

1991: Another motorist is stopped for speeding and evading the police. His beatdown is caught on video:

1992: The cops accused of beating Rodney King are acquitted. People pour into the streets. Looting. 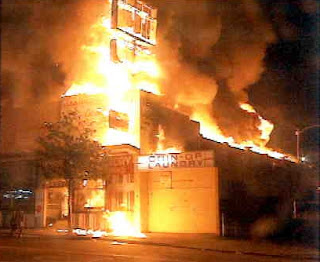 I was in Los Angeles in both ’65 and ’92. I remember the smoke, the fear permeating every quarter of the city.

During the Watts Riots, we were lucky to be able to watch it on TV and not be in the middle of it. My then-girlfriend's cousin was a National Guardsman assigned to patrol Watts during the riots and what he saw was so horrible he would never talk about it.

I met a boy named Walter in class. Unlike everyone else in the class and just about everyone in the school, he was black. And he wasn't a local, but was on some kind of student exchange program from Jordan High in Watts.

Our caravan weaved its way through the Los Angeles streets until we were just about the only white faces to be seen. We finally came to Will Rogers Park (known today as Ted Watkins Park). Mind you, this is not the Will Rogers Park on Sunset where the polo ponies play on Sundays. This park is in the heart of South Central and I can say that all of our hearts were beating faster than normal.


We parked nearby and walked as a unit to the park, as if we were a military outfit. People looked at us—we didn't look at them. But maybe because we looked like hippies and we were young nobody bothered us.

We met Walter in Will Rogers Park in South Central Los Angeles and sat under a shady tree, a bunch
of white kids and one black guy. We sat, just rapping—in the vernacular of the time—talking about music and houses and politics. We stood out like the proverbial sore thumb and people started coming over. Big dudes, little dudes. Cool dudes. Girls. No one seemed to resent our being there. In fact, they seemed glad to have us. Glad to be able to share with us and have us share with them. There was no sense of rancor or resentment. Just curiosity—a curiosity that went both ways. This was a time when people wanted to come together, not be separated. None of them knew Walter and they certainly didn't know us. But they joined our group and we rapped on.

After a while we got up and played a game of pickup basketball—try doing that in a pair of cowboy boots.

Of course we did. So he took us to the projects—Jordan Downs. We drove past burned out buildings and vacant lots that not so long ago had had buildings on them. And we saw how the other half lived.


Our last stop was a trip to the Watts Towers, those soaring spires of glass, steel and concrete built by Simon Rodia. They are a monument to what anyone can do if they put their mind to it.

We finally returned to our cars and, to our relief, they hadn't been stolen. And, corny as it might sound, I think we all learned that we're more alike than different, with the same aspirations, hopes and fears.