Putting the Happy in Happy Thanksgiving

It's two days until Thanksgiving, and I bet some of you are stressed. Maybe it's because you're cooking and ... it's the first time you're hosting, and you want it to be perfect. Or your mother-in-law is coming, and your turkey never lives up to hers. Or the weatherman is predicting snow on Thanksgiving and you're afraid that your relatives won't show up ... or maybe that they will.
Or maybe your stress stems from being a guest. Are you an introvert, dreading a day of small talk with the extended family? A picky eater, going to the home of a gourmet who makes food way to fancy for your tastes? Or are you a dieter, going to the home of someone who likes to push food and you're likely to spend the day going, "no thanks, no rolls for me," "no thanks, no candied yams for me," "no thanks, no cookies for me," ... "dear lord, lady, what part of no thanks don't you get?"

No matter who you are, or what your situation, Thanksgiving can cause stress. The best way to deal with stress is laughter. And that's where I come in. So set down that baster and get ready to smile, because I've got some fictional characters who've had a worse Thanksgiving than you.

Paul and Jamie Buchman from Mad About You 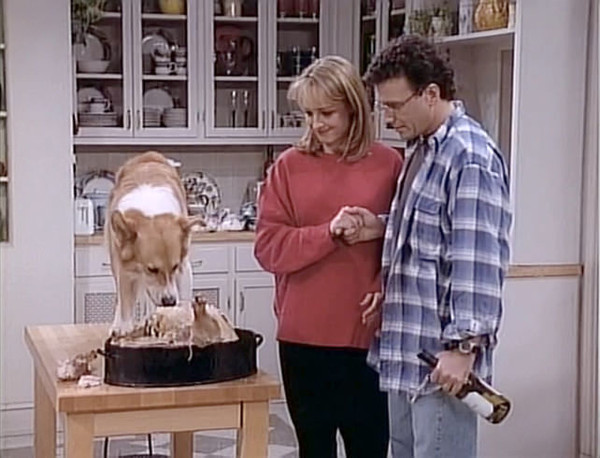 They tried so hard to make the perfect dinner ... only to have their dog, Murray, eat the turkey. 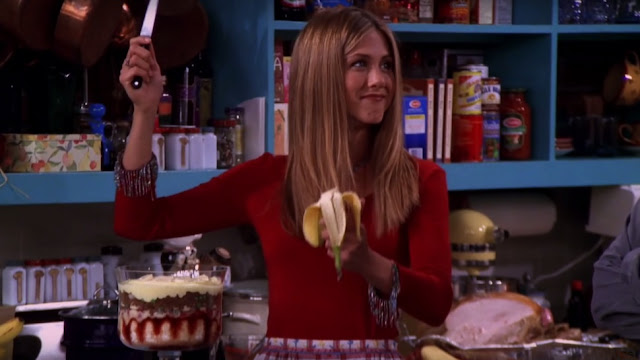 All she wanted was to cook a nice dessert for her friends ... only to learn too late that she wasn't supposed to put beef in the trifle. It did not taste good.


The Gang from Cheers 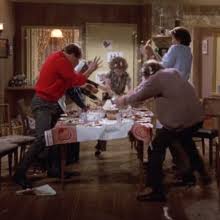 Those poor Thanksgiving orphans. They waited hours for a turkey that just wouldn't cook ... only to then suffer the indignity of being involved in a food fight. (For anyone who's ever read my story "Biscuits, Carats, and Gravy," this Cheers episode was the inspiration.)


Debra Barone from Everybody Loves Raymond She was determined to have a happy Thanksgiving despite her overly critical mother-in-law ... only to drop her uncooked turkey on the floor three times before flinging it into the oven. Yum.

Arthur Carlson from WKRP in Cincinnati He wanted to create the greatest promotion ever, inviting the public to a shopping mall and providing free turkeys ... live ones ... only to learn too late that turkeys don't fly so when you toss them out of a helicopter from 2,000 feet in the air they hit the ground like sacks of wet cement. 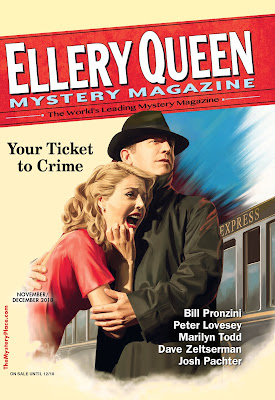 All this con man wanted for Thanksgiving was to eat some good food at his mark's home before stealing her jewelry ... only to learn too late that her mother is an ... inventive cook. ("Bug Appétit" is my story in the current (November/December) issue of Ellery Queen's Mystery Magazine. I'm so pleased to have heard from several readers who enjoyed it, including one who called it "hilarious.")

So, dear readers, I hope you're smiling and feeling less stressed. If you'd like to read my story, you could pick up a copy of the current EQMM, available in some Barnes and Noble and Books-A-Million bookstores, as well as in an electronic version. You can find more information about getting the magazine here. The issue also has a story from SleuthSayer alum David Dean that I'm sure you'll enjoy.) As to the TV episodes mentioned above, I bet you can find them all online.

Until next time, please share your favorite funny turkey day story (fictional or real) in the comments. Happy Thanksgiving!
Posted by Barb Goffman at 00:00