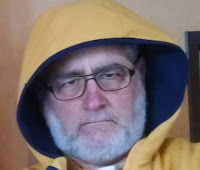 In September I mentioned one of the rare snowstorms my city receives.  Today I am going to talk about a different, more recent, one.

The storm was harsh enough to give both my wife and I the day off and so we decided to walk the half-mile to our closest grocery store for a look around and some lunch.

As we trudged off through the beautiful whiteness I had a sudden thought: With our ski masks and scarves and gloves we were dressed exactly the way banks tell us not to.  You've seen the signs: "For your safety and ours remove hats, glasses, and scarves before entering." Or words to that effect.

Because I suffer from CWB (Crime Writer's Brain) an idea immediately appeared in my skull.  What if some bank robbers decided to take advantage of a blizzard to stroll into a bank unnoticed?

Hmm.  How would they make their getaway?  Obviously they would have to steal some snowmobiles!

When you get right down to it, that was a pretty stupid idea.  But the great thing about writing fiction is that even a stupid idea can make a smart story. 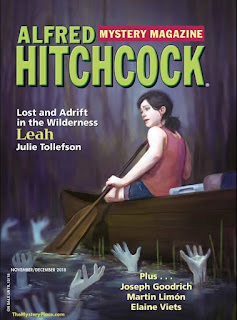 And speaking of stupid, I realized instantly that this was a case for Officer Kite.  This peace officer has appeared in two of my previous stories, "A Bad Day for Pink and Yellow Shirts," and "A Bad Day for Bargain Hunters."

Kite is not a very competent cop.  In his first appearance he got run over by his own police car..  That made him seem like the perfect foil for my snowmobiling bandits.

All the "Bad Day" stories are set in fictional Brune County, and involve strangers getting involved in a tangled mess of bad intentions and worse planning.  So far each story is longer and more convoluted than the last.

If you pick up the current (November/December 2018) issue of Alfred Hitchcock's Mystery Magazine you will discover "A Bad Day for Algebra Tests."  I hope you enjoy it.  And bundle up.
Posted by Robert Lopresti at 00:00