The Biggest of the Best 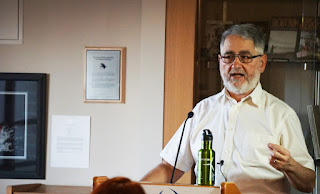 Once again awards time has come around, and I am prepared to list the best short mystery stories of the year. This is my ninth annual wingding and either I am going soft or 2017 was a particularly good year for the field. You will find 18 stories listed below, up five from last year, and one ahead of my previous record. What can I say? May be this was just a year that needed distractions.

Four of the authors were women; fifteen were men. Four authors are appearing for the second time on this august list. Two completed the hat trick. More remarkably, one author scored two on the list this year. The only other time that happened it was achieved by Brendan Dubois in 2012.

Six of the stories are funny (says me); four have fantasy elements. Only one is a historical. I think one could be described as fair play.

Enough chatter, let's go down to the red carpet.

The narrator has just arrived in a town and quickly discovers that the cops are corrupt, the wealthy run things to suit themselves, and the employers rip off the workers. Just like thousands of other crime stories.

But he gets a job at the Water Works where people get paid in brightly colored scrip. He doesn't earn enough to rent one of the identical houses on New York or Kentucky Avenues. He almost gets sent to jail for not paying the poor tax. And the Parker Brothers run everything. It's like they've got a – What's that word again?

Elliot runs a movie theatre that shows nothing but comedies, most of them old. That may explain why Sharon, a doctor, divorced him years ago. Harder to explain is that she's about to have Elliot's baby. Like today.

Elliot rushes her to the hospital and promptly bumbles into a supply closet where a man in scrubs seems to be in the act of killing a woman in scrubs with a knife. Awkward. Cohen writes funny.

Meet the staff of Fake Dog Dirt Etc, a rather low-end novelty shop. One of them just killed their boss, almost accidentally.

They hope to keep the dump open for a few more paychecks, if they can hide the body. And find the boss's hidden money. And avoid the cops. Did I mention the blackmailer?

Deaver is making his second appearance in my annual best of list. And by the way, something very unusual happened here: the Edgar judges and I agree on this one. It is a very surprising thing when one of my favorites gets nominated.

Lessing is an analyst for the CIA; a desk jockey. When an agent dies while preparing for a vital mission, Lessing is the only person with the knowledge to fill the gap.

So all of a sudden he is in a small town in Poland trying to attract the attention of the deputy to the Russian spymaster who is running a ring of seditionists in the United States. But he has to attract the man subtly. If he is too obvious they will know it's a trap. Play hard to get, he is told...

And here is Deaver again, with his second appearance in my Best of 2017. Greedy, greedy.

Roger and Della are having a crisis of conscience. They are a married couple, both moderately successful mid-career archaeologists, and they are in France for a conference. Why the crisis? Well, let's put it this way. Suppose Professor A gets a clue to a career-changing discovery but doesn't realize how to use it. If he tells Professors B and C about it and they are more clever at interpreting the puzzle, are B and C required to share the credit with A? An ethical dilemma indeed. Worse dilemmas will follow.

This is the third appearance in this space by my fellow SleuthSayer David Edgerly Gates.

Montana deputy Hector Moody.is having a bad day. His truck breaks down in the mountains miles from anywhere. No phone reception. A thunderstorm approaching fast. And oh yes, unknown to him, two prisoners have escaped from prison and they have already killed to stay free...

Maddie, a teenager in Peachtree City, is sick to death of her privileged life among snobs, absentee parents, and the self-medicated. She decides to commit murder, just for excitement and power, and, let's face it, because she is evil.

Her reluctant partner in crime is Emma, who is not as smart, not as pretty, and desperately in love with Maddie. Is Maddie willing to use her sexuality to manipulate Emma into crime? Oh, yes.

Hayes, Peter W.J."The Black Hand," in Malice Domestic: Murder Most Historical, edited by Verena Rose, Rita Owen, and Shawn Reilly, Simmons.
Brothers Jake and David fought over a girl named Bridgid and Jake left Pittsburgh for logging work in the midwest. David became a very successful mobster, until his body shows up in a river.

The story begins with Jake coming home to try to discover how his brother died and who is responsible. The first thing he learns is that Bridgid was murdered a few weeks before, and a lot of people think David killed her.

Is there a connection between the deaths? Can Jake stay alive long enough to find out?

Our nameless protagonist is a homeless person. One day he encounters a very strange man at Union Station whom no one notices except the homeless man and Harry. No one can see Harry except our narrator, because he's from another dimension. But Harry isn't the problem. It's the elegantly dressed man with a canvas bag full of–

This is the second appearance here by R.T. Lawton. My fellow SleuthSayer sent me this story for a critique before sending it to AHMM. I assure you the first version I read would have made this list, even if I never got my grubby hands on it.

Luckless burglar (and series character) Yarnell visits a pawn shop on the day after Thanksgiving to retrieve his wife's pawned wedding ring. Unfortunately there is a robbery going on, with a very nervous thief holding a gun. Eventually Yarnell's crafty partner Beaumont shows up, and finds a hilarious way of settling the issue.

Petrin's protagonist is an aging loanshark in Halifax, Nova Scotia. In this story Skig has done an unnamed favor for a couple of Maine crooks and they send him the agreed upon fee. Unfortunately, half of it turns out to be counterfeit so Skig sets out to figure out who along the line of shipment shorted him. Bad things happen: Under the chairs a sight the media might describe as "distressing to some viewers."

This is the second appearance here by my old pal S.J. Rozan. Judah Loew runs a used bookstore on the Lower East Side in Manhattan. Most similar stores have been killed by the Internet but Loew's specialties - including Judaica and mythology - have kept him holding on. Not much longer, alas.


But then a newly arrived book claims to offer a spell for creating a golem , the clay humunculus that a medieval rabbi, also named Judah Loew, built out of dust to save the Jews of Warsaw. Ah, but the dust in a bookstore is special dust...

This is Koryta's second apearance on my best of the year list.

It's 1993 and Jeffrey Tolliver, is a young Birmingham cop. He is in a small town in Georgia on a long weekend that has gone terribly wrong. Before the tale has gotten fairly started he finds himself standing in a hotel parking lot in front of a busload of missionaries and…


"Holy crap,mister. You're in your underwear."
"Running shorts," he said, resisting the urge to cover himself. "Training for a marathon."
"With just one shoe?"
"Half marathon."

The nameless narrator is a young man who has mastered the art of disappearing. He dresses in black, with a stocking cap that hides his face. And as the story begins, it is after ten PM and he is sitting in the darkness near a city tennis court, watching a young man and his beautiful girlfriend as they volley, flirt, and discuss Facebook.

It's clear that there are bad things in our narrator's past, although it is not clear at first whether they were done to him, by him, or both. The last paragraph just slayed me.

Sisters Hannah and Lynn have deep roots in British organized crime. They also have a year-round-Christmas store, The North Pole, which cleans up dirty money from various family businesses. But the sisters have a special sideline. The store has Santa's Mailbox where kids can ask the fat man for help. And while Hannah and Lynn can't promise the latest video game or a pony, if the request is desperate they may offer a special solution… 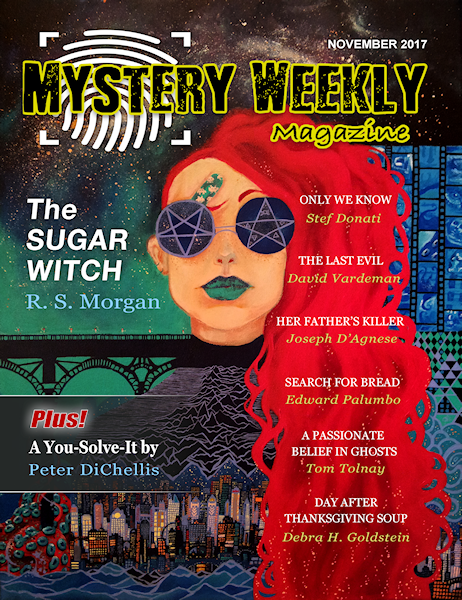 Mrs. Box believes that suffering is good for the soul. She also believes in doing "a lot of good in the world. But there was another tinier but just as important point, and that was to get the leap on people. In her own life she felt a lack of people leaping out at her. In the past forty days and forty nights, not one soul, nothing, had given her a good jolt. Mr. Box certainly had not."

Which is why she keeps a live tarantula in her purse, and pulls it out to shock people. As a good deed.

When Skylar Ricks carjacked Gerald Johannson's Ford Taurus on a February morning in Chicago, climbing into the passenger seat at the corner of Granville and Clark, his hand wrapped neatly around a .44 Smith & Wesson, an unlighted Marlboro between his lips, Gerald said, "Oh, now you're in trouble."

Well, that took an unexpected turn, didn't it? As the story goes on we will learn the reason for Skylar's rash act and a good deal about the personality of Gerald. He is an older man, missing his late lover, and remarkably imperturbable. Even when being carjacked.
Posted by Robert Lopresti at 00:00