The Once and Future Spy

Sir Francis Walsingham was principal secretary to Elizabeth I, as well as her spymaster and head of her security detail. Along with William Cecil, the Queen's senior advisor and Walsingham's chief patron, the two men guarded the Protestant crown and Elizabeth's own person with severe diligence. Heads rolled. Not a metaphor.
Walsingham lived in a treacherous age, but he himself was steadfast. There was a magnetic attraction. What drew him to her, what recommended her to him?

We might remember the fury of religious hatreds in the 16th century. Philip of Spain may very well have felt slighted after Mary Tudor's death, and there wasn't any love lost with the French, either, but Spain and France were Catholic powers, and England was apostate, Elizabeth a heretic.

Her older sister Mary, daughter of Henry VIII's first wife, Catherine of Aragon, wore the crown for five intemperate and bloody years, and did her best to turn back the English Reformation, burning dissenters at the stake. Not few and far between, either, the known number being two hundred and eighty-four. Some better-off Protestants went into exile abroad. Francis Walsingham, then twenty-one, left his law studies at Gray's Inn and beat feet for Basel, in Calvinist Switzerland.
Mary died in 1558, and Elizabeth succeeded. Walsingham came back to England. He stood for Parliament. He got in good with the Earl of Bedford, with the nimble-footed Nicholas Throckmorton (who survived involvement in the plots of Thomas Seymour and Lady Jane Grey, and the murder of Darnley, among other things), and with Cecil. He took the lead in supporting the French Huguenots - and was later ambassador to France during the St. Bartholomew's Day massacre. He played a big part in exposing the Ridolfi plot, which tarnished Mary Stuart, and led to the execution of Norfolk.

Mind you, we're only into the first ten or a dozen years of Elizabeth's reign. Walsingham's got twenty years to go. The through-line, though, is the thwarting of Catholic power and ambitions. This is a guy who seeks to frustrate at every turn the puissant majesties of Papist dominance. Certainly it's a political balancing act, a chess game, but Walsingham seems motivated not simply by loyalty to his sovereign, but gleefully rubbing their Romish noses in any humiliation he could contrive. He wanted boots on the ground in the Netherlands, for instance, open rebellion against Spain by the Protestant Dutch. Cecil persuaded the Queen to more moderate tactics. Then there were the constant negotiations over prospective candidates for Elizabeth's hand. She used the possibility of marriage as an instrument of foreign policy for most of her life, not in some coquettish pursuit, but as a serious means of structuring or weakening alliances. Here too, Catholic and Protestant proved selling points, for and against. 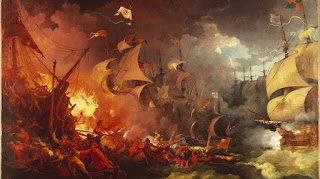 Walsingham's great espionage triumph is the defeat of the Spanish Armada. Given the time and distances, it's extraordinary how well-informed he kept himself, and how immediate the reports were. He recruited merchant skippers and diplomats, footpads and whores. The intelligence was terrific. He also orchestrated Drake's raid on Cadiz, which pushed Spain's invasion planning back a full year. In the event, the naval battles in the Channel, and later at Calais, decided the issue, Francis Drake again the hero of the hour - the famous story of his finishing the game of bowls - but it was Walsingham's system of beacons, built along the south coast, that gave Elizabeth's captains their timely warning.

Less honorable, perhaps, were the inductions devious by which Mary Stuart was betrayed and condemned, but she was easily led, a foolish queen, far less canny than her cousin. Elizabeth would never have put her trust in such a congeries of rascals and lowlifes and feckless naifs.
The story that's always fascinated me, however, is the murder of Christopher Marlowe, at a tavern in Deptford, if in fact it wasn't a whorehouse, in a drunken quarrel over money. The facts were stated at an inquest, and the three other men present were exonerated, including the one who actually stabbed Marlowe over the eye. There's been a lot of back-and-forth about this, over the years, and whether or not the witnesses are credible. Generally speaking, it's been acknowledged that there's 'something queer' about the whole episode. [Marlowe biographer John Bakeless]

For our purposes, there's the longstanding suspicion that Marlowe was a spy for Cecil, in the Low Countries. And perhaps earlier, when he was at Cambridge, for Walsingham. The three men he was drinking with, that afternoon in Deptford, were all connected to the Walsinghams. Two of them, Poley and Skeres, had been active agents provocateurs for Sir Francis in the Babington plot that undid Mary, Queen of Scots. Marlowe's killer, Ingram Frizer, was in the household employ of Thomas Walsingham, a first cousin. Marlowe had been commanded to appear before the Privy Council to answer charges of libel and sedition - privy to the Crown, in effect the Queen's cabinet, the Council was the seat of authority for both Cecil and Walsingham. Marlowe was killed ten days after the summons, but Sir Francis Walsingham himself was already three years dead at the time of Marlowe's murder.

Did he reach out from the grave? One way of looking at it is to ask what Marlowe might have known and what stories he might have told. By far the most interesting speculation involves the so-called School of Night, a supposed group of atheists patronized by Sir Walter Raleigh, although the evidence is exceeding slim: the theory here being that Kit Marlowe was silenced so he wouldn't incriminate Raleigh, atheism as the time being family to treason, the Queen both monarch and head of the Church of England.
But the cold case mystery of Marlowe's murder seems to illustrate how much space Walsingham has taken up in the Elizabethan imagination, that his shadow could fall so far, and that a dead man's hand struck the fatal blow.

Excellent piece about espionage. I'm about to start reading Ken Follett's A COLUMN OF FIRE where Walsingham and Elizabethan spying is the central plot. Your posting wets my appetite for the story.

An Elizabethan spy/ detective would be a good bet with all this fine material! Great clothes, too.

O'Neil and Janice,
I should have suggested the Anthony Burgess novel A DEAD MAN IN DEPTFORD, which is enormously entertaining but not fanciful - I'm a big fan of NOTHING LIKE THE SUN, too, his Shakespeare novel.

Walsingham was a master spy, but he was also, in his own way a true believer: it was not good to fall into his hands. Torture was used. He had no pity, no mercy. Although I agree that Mary Queen of Scots was an idiot who fell for just about anything...

Re Marlowe, it's been long believed that Touchstone's line "Understanding, it strikes a man more dead than a great reckoning in a little room." is about Marlowe's murder, which makes you wonder what Shakespeare knew / heard / was trying to say...

As long as we're slinging around suggested titles, are you familiar with the writing of Louis Bayard (full disclosure, he's a friend of mine)? One of his books, THE SCHOOL OF NIGHT, might be worth a look for you. GREAT read.

Also, a couple of years ago, I wrote a series of posts along these lines, revolving around the murder (by poisoned enema) of Sir Thomas Overbury, a courtier and pimp who prospered in large part because he connected Elizabeth's successor James I (VI of Scotland) with one of his "favorites," a dumb-as-a-pimple pretty boy named Robert Carr.

You can find all three posts below: