To Have and Have Not


Hemingway published To Have and Have Not in 1937, the picture was released in 1944. The book isn't unreadable, but the movie's a lot better. Watching it again, I'm reminded of a couple of things. Bogart and Bacall falling in love. Howard Hawks never shot a scene that dragged in his entire career. William Faulkner was one hell of a script doctor, drunk as a skunk or otherwise.

The story Hawks tells is that he was out on a hunting trip with Hemingway. Hemingway starts bitching about how Hollywood can't get his books right. Hawks says he's selling his books to the wrong people. "Hell," Hawks says to him, "I could take your worst book and make a terrific picture." We can imagine the long, stony pause. "Yeah?" Hemingway says. "What is my worst book?" 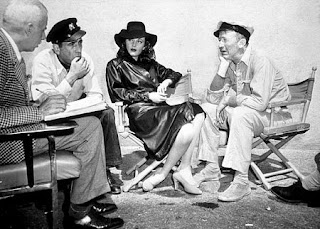 Going in, it's obvious they won't get past the censors, and Faulkner isn't even convinced there's a movie in it. What if, Hawks suggests, we wind the clock back and tell the story that led up to the book? They bring Jules Furthman on board. Furthman's got what, a hundred credits, give or take? According to Hawks, they come up with enough back story for a whole other picture (actually made in 1950, The Breaking Point, with Garfield).

Betty Bacall was eighteen when she made the cover of Harper's Bazaar, and her picture caught the attention of Hawks' wife Slim. It was Hawks who wanted her voice to be lower in register, and it became her trademark, a smoky, throaty purr. "You know how to whistle, don't you, Steve?" Bogart rolled over and paddled his paws in the air.

The echoes of Casablanca weren't accidental.  It's wartime Martinique, but it's still Vichy. Bogart throws in reluctantly with the Resistance. His common sense isn't blunted by sentiment. When de Bursac's wife loses her temper and snaps at him, it's Frenchy who apologizes. "Forgive her," he says, "she's not herself." Bogart shoots him a look. "Oh?" he asks. "Who is she?" 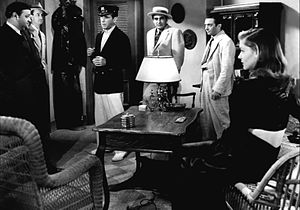 Another common Hawks signature: the apparent throwaway scene, which is integral to character - character being everything, in Hawks. Here, the musical numbers, Bacall and Hoagy Carmichael, "How Little We Know" (which signals what we've already guessed from her body English) and "Am I Blue?" Seriously, you have to ask? It might put you in mind of Rio Bravo, Dean Martin and Ricky Nelson, Walter Brennan on harmonica. The drunk, the kid, the gimp, each of them missing a piece, you might say. And then John Wayne, self-sufficient and contained. Or you make a different calculation, that Chance is not only set apart, but isolated. The other three have a vulnerability, a soft spot he doesn't get to show. Or share.

I saw The Big Sleep first, before To Have and Have Not, and The Big Sleep has a lot of the sexual dynamic, not to mention a better score by Max Steiner, but it doesn't have quite the same energy. It doesn't have the invention, or the novelty. The way the two of them look at each other. There's nothing contrived about it. It ain't the lighting, or the soft focus. Bogart and Bacall are there.

Movies are an artifice, a construction. The camera catches reflections. The images have already been decided, and they're waiting to be arranged. But as with all things, we have to allow for happy accident. Accidentally, To Have and Have Not is a document. We watch two people get lucky. You learn how to whistle. 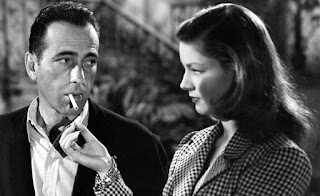 David, people often complain that the original book is better than the movie. I think To Have and Have Not is the opposite. The movie is a 1000 times better than the book. And I agree with everything you say about Hawks and Bogart and Bacall. Another Bogie movie that's better than the book, imo, is In a Lonely Place, though I know that sometimes engenders some pretty intense feelings from the book's loyalists.

"Two people get lucky." Two people finding one another. Bogie and Bacall. I like both books and both movies a lot. Then again, I'm easy to please and easy to bore. I walk out away from a lot of movies (walk out of theaters or just turn off the tv). Nice posting.

One of my top 5 favourite films. I love it when I come across someone who thinks the same of it. Bacall is magic. The scene with the cigarette light in the bar may be the sexiest scene ever. Love that both characters aren't heroes by choice. And yet, there's kindness with the poor drunk, Eddie. Brilliant directing.

Always loved this movie--and that story behind the movie too (the bet between Hawks & Hemingway). Great piece here analyzing the film, and I love that emphasis on "happy accident." Good perspectives.

Credit where credit is due: Robin Wood's terrific book on Hawks, which came out in I think 1972 or thereabouts, and now reissued. Essential.

I can only think of a couple of other films that were better than the original material (the play "Nuts" was deadly, but the film worked much better, maybe because of an all-star cast), but this is certainly one.

Speaking of Bogart in The Big Sleep, didn't Faulkner also work on the screenplay for that?

Love, love, love "To Have and Have Not". And I agree that it's 100% better than the book. Other candidates (imho) for that signal honor are"
"Lonesome Dove" - Robert Duvall and Tommy Lee Jones made TV/movie magic with that one. So was "The Last Picture Show", which has led me to believe that Larry McMurtry's writing works far better for screen than the page. Same with "Prizzi's Honor" and (arguably) "The Manchurian Candidate", both by Richard Condon.

Steve - Faulkner and Leigh Brackett, her first script for Hawks, the beginning of a long collaboration. Story is they couldn't figure out who killed the Sternwood chauffeur and asked Chandler, who couldn't figure it out, either, but at that point, they'd already changed the story so the original murderer in the book wasn't the murderer in the movie. Faulkner's responsible for the scene in the re-shoots: "Depends who's in the saddle."