by John Floyd
In our columns at this blog, we Sayers of Sleuth try to stick to the subject of mystery writing. I'm often guilty, though, of wandering off topic (especially to things like movies and TV), and sure enough, my focus today is on a book of narrative nonfiction. But today's post is also vaguely connected to the mysterious, because if I hadn't become acquainted several years ago with fellow mystery writer Joseph D'Agnese, he probably wouldn't have recently offered me what turned out to be an interesting opportunity.

Here's what I mean. Back in early September Joe emailed me from his home in North Carolina to tell me his wife, Denise Kiernan, was about to do a nationwide tour for her new book, The Last Castle. In fact I had already heard about the book, and had even pre-ordered it from Amazon a month or so earlier, partly because my wife Carolyn and I had so enjoyed Denise's previous book--a New York Times bestseller called The Girls of Atomic City--and partly because The Last Castle is a narrative history of the Biltmore House, an attraction in Asheville, North Carolina, that we've visited several times over the years.

Anyhow, Joe also explained in his email that one of the stops Denise would make on the tour was Square Books in Oxford, Mississippi, and that Denise usually prefers not to do a solo reading/signing; when possible, she asks someone she knows to come and appear with her at the event, and in effect interview her about the book in the popular "a conversation with the author" format. And since I'd met Joe and Denise a couple of years ago in Raleigh and we've swapped several books and emails since then, he asked if I'd like to appear with Denise at the event in Oxford, which is only about three hours' drive from my home near Jackson. 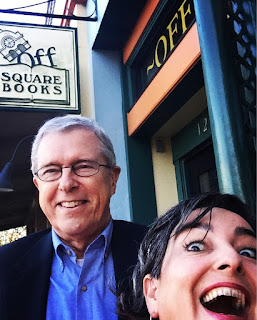 So that's what we did, on the afternoon of Wednesday, October 25. I drove up there, met with Denise beforehand to strategize and catch up a bit, and then she and I spent an hour or so discussing her book in front of an audience of readers and writers. She was of course a better interviewee than I was an interviewer, but I think we all had a good time, and everyone (except Denise, already an expert) learned a great deal about the famous Biltmore estate, the Vanderbilts who constructed it, and America's Gilded Age. Afterward she signed a bunch of books and we all stood around and chatted until seven or so, at which point I headed home and Denise drove to Memphis to catch a flight the following morning to New York, her next stop. (She'd spent the previous two days in Seattle and L.A. I remember once being told that national book tours are like attending Epcot Center in Florida: Every Person Comes Out Tired.)

I should mention here that Square Books is one of several excellent and widely-known independent bookstores here in Mississippi--others include Lemuria in Jackson and Turnrow in Greenwood--and that the bookstore staff there in Oxford showed both of us an incredibly warm welcome. Many thanks to Richard Howorth, Alissa Lilly, Toby Morrison, and everyone else at Square Books. Denise had been to Oxford twice before, to speak at Ole Miss, and my most recent trip there was as one of the signers of Mississippi Noir a year ago, but we both agreed that this trip was the most fun.

A final note. Like The Girls of Atomic City (subtitled The Untold Story of the Women Who Helped Win World War II), The Last Castle is a fascinating book about a fascinating place and time in our history. Many of you probably know that the Biltmore House is the largest private residence in America, a sort of giant French Renaissance chateau constructed by George Vanderbilt in the late 1800s. What you might not know is that the house is 175,000 square feet (larger than the castle where Downton Abbey was filmed), with 250 rooms, 33 bedrooms, 43 bathrooms, and 65 fireplaces, located on an estate of around 125,000 acres. And the people involved in its history are no less interesting than the setting. According to the description/subtitle on the front cover of Denise's book, The Last Castle is "the epic story of love, loss, and American royalty in the nation's largest home." I couldn't have said it better myself. And by the way, this book also made the New York Times bestseller list, as soon as it was released.

If you've read The Last Castle already, you know what a literary achievement it is. If you've not read it, I hope you will. It's a marvelously entertaining and eye-opening look at not only an American landmark but at America itself.

To Joe D'Agnese and Denise Kiernan: Thank you for allowing me a small connection to all this. I had a great time.
Posted by John Floyd at 00:01