“We are all in the gutter, but some of us are looking at the stars.” - Oscar Wilde

A few months ago I read a story called "Crow Mountain"  by John Floyd in the latest issue of The Strand.  A good story it was, but what amused me was that it included a plot twist that I had used a decade before. 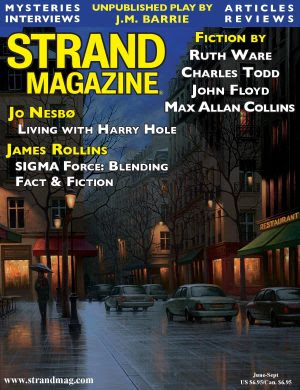 I am not suggesting anything nefarious.  First of all, John needs to steal ideas from me like  Bryan Bowers needs me to give him autoharp lessons.  (Slow down, Bryan!  Make some mistakes!)  But most important - if he had read my story and instantly said I can use that it would have still been all right.  It would be what Lawrence Block calls "creative plagiarism."  You take the original idea in use it in some new and original way.

Here's what I mean by the shared plot twist: If you read John's story and then started mine when you got to a certain point you might say: "Huh.  I bet I know how it ends."  And you'd be right  Same if you read mine first, then John's.

I told John I liked the story and mentioned the coincidence.  I said it reminded me of one of my father's favorite sayings: "Great minds run in the same gutter." 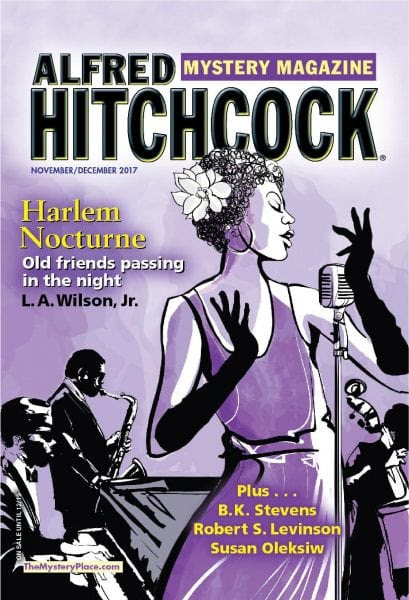 John graciously replied: "I’ll share a gutter with you anytime."

I mention this because I have a story in the new November/December issue of Alfred Hitchcock's Mystery Magazine.  (My 27th appearance there, he said modestly.)   And "The Chair Thief" definitely involved creative plagiarism.

I wish I could tell you who I stole from, but I don't know.  A few decades ago I went through all the mystery shorts I could find in the public library.  I fell in love with a tale by Lawrence Block and when his collected stories came out I looked forward to repeating my acquaintance with that one.  But it wasn't there.

I emailed him, describing the story.  Larry politely replied that it sounded like a great idea, but it wasn't his.  So I'm stuck.

Here is the plot of that original story; A true paranoiac gets ready for his day, putting fresh tin foil in his hat to keep out the mind controllers, and wrapping his torso in plastic wrap to foil the death rays.  Then he goes out for a stroll.  Things happen.

My story, on the other hand, is about two office-mates who get mad at a co-worker.

You might say "those two plots have nothing in common."  Well, maybe not.  But it comes down to what I said before: If you read them one after another you would probably guess how the second one ends.

But since the first one is lost, we don't have to worry about that.

I hope you enjoy "The Chair Thief." And if anyone remembers the author and title of the other story, I wish you would let me know.
Posted by Robert Lopresti at 00:00

A nice illustration of how stories are made from other stories. Fortunately the few real plots admit of endless variations by people as ingenious as you and John Floyd!

Story ideas come from so many places that I'm never quite certain if I'm writing something original or recycling something I read or saw somewhere else. I always hope that my take is sufficiently different that if I am recycling a plot or plot twist or whatever that it, at the least, works well within the context of the story. For example, I hadn't realized until you pointed it out in a review on Little Big Crimes that "Smoked" was a modern-day take on a classic Western plot. Now that you've pointed it out, I can't unsee the connection.

Rob, I haven't read the story you mentioned, but I bet it's better than mine. And if we used the same idea, I'm flattered--I've always admired your plotting (as well as your track record at AHMM).

Hey, "The Magnificent Seven" is, pretty much, "The Seven Samurai". But both are great. I've heard it said that there are only about 5 basic plots, and everything else is theme and variation. I often believe it. As I've said before, I used a 4,000 year old plot device in a story (Sophistication, AHMM July 2007) and it was still fresh as a daisy.

I haven't got my copy of the new issue yet, but I'll read "The Chair Thief" ASAP!

My copy of AHMM arrived yesterday and I look forward to reading your story, Rob, as always. It's interesting how several authors can take the same basic idea and create such different stories from it. Maybe that's WHY there are so few plots. We don't need more than 36 or 21 or 9 or whatever the number really is.

Plagiarism is such a tricky subject, too. I used it for a story last summer in Alfred and even mentioned the George Harrison lawsuit (which I still think was wrong to find him guilty) and John Fogarty's being sued by his former record company. But there are even fewer notes than there are plots, so what's a guitar player to do?

As usual, a great inside look at writing.

Interesting article. Literary inspiration comes from many sources and a variation on a ideal is not plagiarism. I believe Eve is correct about their being a limited number of basic plots.

The story with the tinfoil hat etc. sounds more like science fiction than mystery. If I had one guess, I'd say it was written by Fredric Brown who wrote about equal amounts in both genres. I have a book of all of his short SF & wish there were a book of his short mysteries.

Yes, plagiarism, real & imagined, is a beast. Several years ago, when I was writing about php computer code for the internet, and gave examples, the "plagiarism detector" rejected several of my articles because in the wonderful php language there's one and only one way to write certain functions.

Really interesting riff on "Creative Plagiarism," Rob. And congratulations on getting that 27th story into AHMM!

If we really want to go crazy on this, we could point out that many well-known musicals are, technically, rip-offs. "South Pacific" from James Michener, "West Side Story" from Romeo & Juliet, "Les Miserables" from...

Does it matter? Not really. I remember chaperoning a senior prom back in the bronze age where, as a goof, the band played a medley of 23 songs with the same chord progression. We all got a good laugh out of it.

Steve, I don't consider it a ripoff if the creators of the musical got permission from and paid the author of the original. (If anyone wants to base a musical on my five page story in AHMM, my bank account is always ready to discuss it.)

THanks, everyone, for your comments.

That sounds like a great premise, Rob. Unfortunately it doesn't ring any bells with me.

I may be way off track, but your description made me think of a plot in college. One student had installed the Amaz-O-Gas-Saver or some such miracle engine enhancer that was supposed to save gallons. At night, fellow students would top off his tank so that he figured he was getting 20,000 miles per gallon or so. He couldn't believe his luck with the device.

Having received the most recent issue of AHMM Tuesday, I all but immediately read Rob's story. It's a nasty little piece of work, and I mean that in the nicest possible way. I could identify...

Leigh Lundin--the gas tank trick is something I first had called to my attention by a movie from 1972 (Pete and Tillie; Walter Matthau and Carol Burnett), In that movie, Matthau and Burnett played a married couple with a small child who is dying of cancer (I'm going by memory here). Pete (Matthau) devises a prank in which he and his son will surreptitiously fill up their neighbor's VW bug every night. The neighbor starts bragging about his great gas mileage. At which point they start siphoning gas out of his tank, driving him crazy, because he has no idea why his gas mileage is now so lousy.

Don, I hadn't heard of part 2 of that trick. Slick!