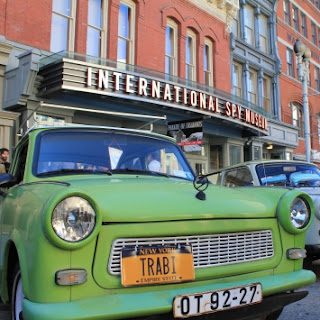 My pal Michael Parnell alerted me to an event this past Saturday, the 11th Annual Parade of Trabants, held at the International Spy Museum in DC. What's the significance of this? Funny you should ask.

Trabis were churned out in East Germany for a little over thirty years, from 1957 to 1990 and the fall of the Berlin Wall. It had a two-cycle engine with 26 horsepower, zero to 60 in 21 seconds. You had to add oil to the gas, like a lawnmower or an outboard motor. They coughed and choked, and blew smoke. They didn't have a fuel pump, the gas tank was in the engine compartment, on top of the engine, the fuel was gravity-fed. 3 million of them were manufactured, and the basic design never changed.

Trabis are kind of like currywurst. The nostalgia element is tempered by the reality. They were cheap, they were crappy, they were a necessary fact of life for those East Germans who could even afford them, crappy as they were. They turned into the punchline of a joke that wasn't funny the first time it made the rounds. Then that world shifted on its axis. In mid-1989, the dominant Cold War paradigm began to collapse of its own weight, a suffocating inertia that just puddled on the floorboards. Thousands of Ossis packed up their household goods and drove their loaded, laboring vehicles through Hungary or Czechoslovakia, to get to West Germany. Like the Joads escaping the Dust Bowl, it was a leap of faith.

A lot of Trabis fell by the wayside on this journey to a better life. Abandoned, derelict, giving up the last gasp. The ones that made it had to be granted exceptions from pollution standards, they burned so dirty. And they were representative, they became proxies for everything that had gone wrong in Eastern Europe, behind the Iron Curtain.

This is an interesting transformation, or perhaps transubstantiation - the specific to the generic, water into wine - technically, I think it's an example of metonymy, where a part stands in for the whole. More than that, it's evolved. Language isn't static. Trabis are emblematic of an era, but they're a moving target. They're shorthand for the Cold War, yes, and at the same time, for Reunification and its discontents. Germans can be very thin-skinned. Like most of us, they don't like being reminded of past humiliations, especially when they've been self-inflicted. Trabants smell of failure. Not only failed history, and the failed state of East Germany, but the failure of West Germany to effectively assimiliate those former East Germans, those Ossis.

This is very much about the present, not the past, although dark echoes of the past are ready to hand. Too many Ossis were unskilled labor, not at a premium in a high-tech labor market. A lot of industry in the East was smokestack, and couldn't be retooled. West Germany was trying to integrate a territory, an infrastructure, and a population half of its own size, which had been economically and politically paralyzed since Berlin fell to the Russians in 1944. There were dislocations and disappointments. It shouldn't come as a surprise that there was a boiling point, a surge in anti-immigrant incidents, skinhead violence, scapegoating, a little too reminiscent of the Germany of the 1920's, with its pervading sense of grievance.

Ossis are still underrepresented in the German business and political establishment (although Angela Merkel herself is an Ossi). In last September's elections, the far-right Alternative for Germany polled at 21.9 percent in the former East - they were at 12.6 nationally. This phenomenon, this alienation, is fueled by a perceived 'cultural colonialism,' an institutional condescension on the part of West Germans. The structural weaknesses of the East are abiding and genuine. 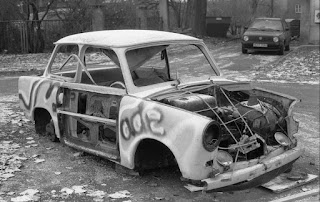 Twenty-eight years ago tomorrow, November 9th is the anniversary of the day the Berlin Wall fell.

I know this car! Sort of– I've never driven one. A year after the fall of the Berlin wall, I happened to be in Germany. My German colleague and I passed an odd-looking, putrid green car with tailfins like a DKW. In response to my "What the hell's that?" he went on to explain the Trabant and the headaches they were causing West Germany.

Given the smoke, noise, and the reliability of a 50¢ lawnmower, they were despised by their East German owners, who often pushed them into a ditch and walked away. (Among the unpleasant discoveries after the collapse of East Germany was the astonishing dumps of toxic pollutants soaking into the mire of the great socialist state.)

The Trabant's body was made of an unusual plastic with two ghastly drawbacks: (a) in the warm sun of a summer day the car's body stank, and (b) the plastic was a bizarre type that couldn't be recycled, a double affront in a nation determined not to waste waste.

A bureaucrat hit upon a brilliant idea– chop the bodies into small pellets and pave German highways with them. That autumn, roads were paved with an unending supply of sliced and diced car bodies.

Late the following spring, Germans discovered the essence of the bureaucrat's oversight. He apparently hadn't heard of anomaly (a) above. Germans out for a summery drive found newly paved highways stank to high heaven. The country had to repave afflicted roads a second time.

Interesting article. I wasn't aware of a lot of that. Nice comment from Leigh about smelly highway. East Germany. I remember it. Met a few West Germans at Fort Rucker. Foreign helicoptor pilots were trained at the US Army Aviation Center there. Best dressed - West German. Politest - West Germans. Who did they hang with? The Isralies.

David, an excellent insight into the old East-West divide. Thanks for the history.

Leigh and O'Neil, great additional comments to the article.

I've heard about Trabants. Kind of legendary (in a bad way). Thanks for the info on them.

I think the East-West divide was fueled by expectations on both sides: East Germans (esp. the young ones) thinking that unification would bring them to a material paradise, but also afraid that they were in no way prepared for it (but not willing to admit it). West Germans, that - what are we going to do with all these people? And the general feeling of humans in the midst of change - things were better the way they were. Even if they weren't.

Good gosh! I remember where I was when the wall fell! (Watched it on TV!)