Several years ago, I sat on a panel with three other writers and one of the patrons asked if we outlined or not. I said "yes," and it set off a debate that filled the rest of the evening and did little except confuse the poor woman who asked the question in the first place.

Saturday, I conducted a workshop on plotting and the same issue held the center stage for most of the afternoon. I think it's an important question, but there's not one right answer. Writing is a personal action tied to your own rhythms, thought process and voice. About half the writers I admire do outline and an equal number don't. Both approaches have advantages.

Dennis Lehane and Tess Gerritsen don't outline. Gerritsen writes (or used to write) her first drafts in fountain pen in a notebook over the course of about seven months and revised for the rest of the year. Lehane used to write longhand on legal pads and type his work into the computer at the end of the day. He said that if he hit writer's block (a topic for another day), it meant he'd made a wrong choice somewhere and he had to re-read everything to find it. He would make all the necessary changes from that point on and continue. I don't know if his process has changed now that he also works in television. 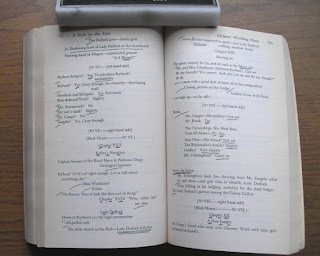 Robert Crais got his start in television, writing for Hill Street Blues, Cagney & Lacey, and others. He says he still pins index cards with ideas on a cork board in his office and sorts them until he knows where he's going. Maybe having to write quickly and know the good guys will survive at the end makes that necessary. Mark Twain didn't outline but Charles Dickens did.

When I started writing (without an outline), I produced nearly 300 pages of a first novel over the course of about a year and a half. Then I got lost. I went back and discovered I had over 125 characters, many appearing only once, and lots of dialogue that went nowhere. I scrapped about 90% of what I'd written because it was all tangents and false starts. What was left looked sort of like an outline, and I've used a refined version of that approach ever since.

My thought process is far from linear (my friends prefer to call it "delusional") so plotting is hard for me. I also tend to use several point of view characters to help with pacing and to keep information away from certain people. Outlines help me keep track of who knows what. It also helps me find recurring images or themes to use along the way. I usually have a general idea of the ending, but the outline helps me figure out how to get there. It's sort of like MapQuest with a few wrong turns.

My outline is closer to a story-board, a list of scenes that name the POV character, the setting and the important action or change that takes place in that scene, all in three to five typed lines. I like to have about fifty scenes in what seems to be the right order before I write the first real text, but I never have them right. I add scenes, delete others, and move many around to get the pacing right and strengthen the cause and effect connections. That list is both my outline and my first draft. By the time I finish the first full prose version of the story, I've revised that list at least a dozen times. I think my record is 27. By the time I have the list and the completed first typed text, most of my plotting is done. Everything after it is revision. 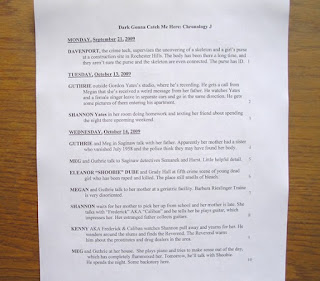 That revision often involves going back and adding false leads or red herrings to make the ending a surprise. Occasionally, I find a more surprising ending along the way. Chris Knopf (I don't think he outlines) once told me that he writes with several possible endings in mind. When he decides which one will pack the most punch, he goes back and changes the details that lead elsewhere. I suspect other writers do that, too. I assigned Huckleberry Finn in my American lit classes for decades, and I still maintain that Twain added the scene with the dead man in the floating house (chapter 9) when he realized that Pap was an unresolved problem at the end.

People who don't outline have a sense of pacing and probably know their characters well enough (maybe in a series?) to understand where they will go and what they will do next. And, again, there's always revision. At that plotting workshop last week, I cited Jack Bickham's book Scene & Structure 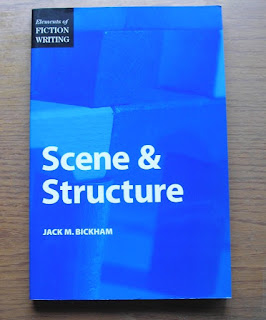 with his explanation of scene and sequel. The sequel is a reflection on what has happened and what to do next. It helps with pacing and it gives pantsers a place to figure out where they will go next. They can even delete the passage later if they want to.

If you outline and it locks you up, toss it away and try writing your first scene. That will show you what your second scene should be. That will give you your third scene, and so on.

If you write from the seat of your pants and keep getting stuck, try an outline. My scene list is usually about six pages long and takes me anywhere from two to six weeks to write. Not only does it give me the action, it shows me what research I might have to do. Maybe that's another topic for a rainy day.

Remember, the only wrong way to write is not writing.
Posted by Steve Liskow at 00:01