If you’ve read my novel, The Big Rewind, or maybe stopped by my Twitter feed (@libbycudmore) or talked to me for, I dunno, 10 minutes, you’ll learn that there are three things I love above all else in this world: Raymond Chandler, Steely Dan and The Shield.


The Shield was the catalyst for much of what’s now considered a Golden Age of television. Without Shawn Ryan’s ground-breaking cop show, there would be no Breaking Bad or Better Call Saul, no Sons of Anarchy and no The Walking Dead. The series revitalized Michael Chiklis’ flagging post-Commish career and, better still, introduced us to Walton Goggins, who went on to steal the show on Justified, co-star on Vice Principals and appear in basically every movie that’s coming out next year. And for this we are all so, so thankful.


But more than just seven seasons of white-knuckle brilliance (and an excuse to step away from your manuscript for a few minutes) The Shield can serve as a master class in writing – from plot twists to characters and world-building. It’s available on Hulu and Amazon Prime, so you really have no excuse not to at least watch the pilot. 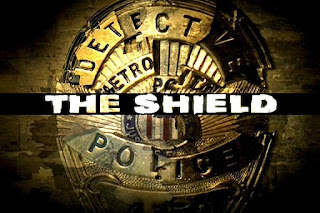 No character in The Shield was wholly good or wholly evil. Sure, Vic Mackey (Michael Chiklis) routinely beats suspects, but he also brings groceries to a women’s shelter. Claudette Wyms’s (CCH Pounder) moral code may help her take down murderers and rapists, but it also alienates her daughters. And Shane Vendrell (Walton Goggins) might be responsible for one of TV’s devastating season finales in season five, but he knows why he does it and trusts that the audience does too. These characters are written as whole and complicated, challenging your expectations, and you should strive to write characters who reflect the range of the human condition. Nothing is more boring than a goody two-shoes, and nothing is more infuriating than a one-note villain.


Still In Hollywood: Farmington may be fictional, but it’s a city that lives and breathes, from the Barn to the Biz Lats territory. You’re dropped into the world from the start and expected to run to keep up, and better still, know your gangland and where you can and can’t go after dark. And while much of this is because film is a visual medium, there’s no reason you can’t take some of that world-building advice for yourself.


Try this: Draw out a map of where your characters live and work, where they buy groceries or hard drugs, where they go to hear music, where they go to pick up women. Know your streets, create neighborhoods, populate them with teens who rake their elderly neighbors’ lawns and people who don’t pick up after their dogs. Then fill it with your characters, main and otherwise, give them conversations that spark like an old electric chair.


And when that part’s done, maybe kick back and watch some TV. You’ve earned it.
Posted by Libby Cudmore at 00:01