by Paul D. Marks
Since Turner Classics doesn’t appear to be doing a noir Summer of Darkness like they did last summer, I thought I’d mention some film noirs to turn those bright sunny days into days of shadows, dread and despair. Hey, I’m just a happy-go-lucky guy.
And while Turner and other stations do run noirs at various times, they often seem to stick with the classics and well-known films. Double Indemnity, Out of the Past, Postman Always Rings Twice (some of my favorites). But they sometimes overlook the lesser-known noirs. And while noir fans might know these, people looking to expand their horizons into the dark side might not. So I thought I’d mention a few here that are available for purchase and/or rent, as I said, to darken those too cheery, happy days of summer. 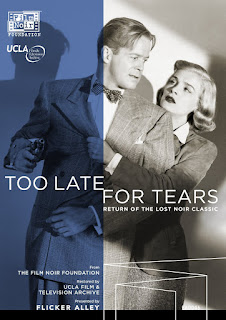 One of my favorites is Too Late for Tears (aka Killer Bait) – 1949 – with Lizabeth Scott and Dan Duryea. She’s so evil in this one that even Duryea, who’s pretty good at being rotten himself, can’t take her. A husband and wife (Scott) are driving their convertible when someone in another car throws a suitcase full of cash into their car. She wants to keep it, he not so much. Noir ensues. Good, low budget noir. I like this one a lot. Some nice shots/scenes at Westlake Park in LA and other LA locations. It was written by Roy Huggins, who later created The Rockford Files and The Fugitive (TV series), though David Goodis might dispute that, among other things. And it’s just recently come out in a new, fancy-dancy restored Blu-ray/DVD edition. 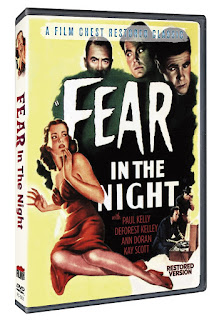 Fear in the Night – 1947 – stars Paul Kelly, DeForest Kelley and Ann Doran. And yeah, it’s that DeForest Kelly, before he ran around saying stuff like “Dammit, Jim, I’m a doctor not a mechanic.” A man dreams he murdered someone in a weird-shaped mirrored room. Then slowly comes to believe it wasn’t a dream. It was remade in 1956 as Nightmare, with Edward G. Robinson and Kevin McCarthy and relocated to New Orleans. Both versions are good, though if I had to pick one I’d probably say I like Fear in the Night better. Both are based on a story by Cornell Woolrich (William Irish). 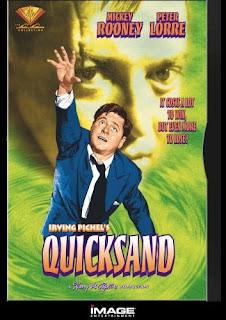 What do you do when your days as the boy ingénue are over and Judy Garland doesn’t go to CC Brown’s for a hot fudge sundae with you anymore – and you’re down on your luck? You gotta find something to do. You turn to noir. And Mickey Rooney did. After the War, in the 1950s, he made a series of low budget film noirs. I couldn’t decide if I should go with The Strip – 1951 – or Quicksand – 1950 – so what the hell, check ’em both out. In The Strip Rooney plays a drummer who loses his girl to a gangster buddy. In Quicksand he’s a mechanic who “borrows” 20 bucks from his boss to take a girl on a hot date. When he can’t pay up, he slips deeper and deeper into……quicksand. The Strip has the added attraction of Louis Armstrong and his band and seeing Louis do A Kiss to Build a Dream On, which was nominated for an Oscar. Interesting background on the song since it was written in 1935 but nominated for an Academy Award in the 50s. Normally a song would have to be new to be considered for an Oscar for best original song, but Oscar Hammerstein II completed the unfinished lyrics of the older song for the 1951 movie and I guess the Academy decided to fudge it. – You might have to wait till The Strip plays on one channel or another. I’m not sure it’s available for purchase or streaming. 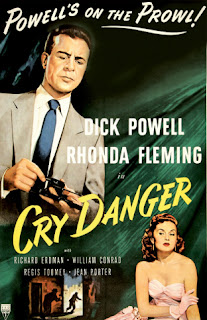 Dick Powell wasn’t on the skids, but he did want to change his image from the juvenile lead in backstage musicals to something more adult. Going from lines like “Hey, I've been for you ever since you walked in on me in my BVD's” to “I caught the blackjack right behind my ear. A black pool opened up at my feet. I dived in. It had no bottom. I felt pretty good – like an amputated leg.” And, “She was a gal who'd take a drink, if she had to knock you down to get the bottle.” So, he jumped on the Raymond Chandler bandwagon, playing Philip Marlowe in Murder, My Sweet, two years before Bogie played Marlowe in The Big Sleep, and did a fine job of it. MMS is based on Chandler’s Farewell, My Lovely. One of Powell’s lesser known noirs is Cry Danger, with Rhonda Fleming and Raymond Burr, which is what I really wanted to point out here. Powell’s a mug sent to prison for something he didn’t do. He gets out, wants to set things right, and returns to LA. What I really like about this one are the great LA locations, especially of Bunker Hill and surrounds, an area that was totally flattened and redeveloped in the Sixties. Many film noirs were filmed at Bunker Hill, including Kiss Me, Deadly, Criss Cross and Backfire. So if you want to see LA’s real noir hood, check out these movies and Cry Danger. And as a side note, I have a couple of new stories coming out in Ellery Queen Mystery Magazine in the future that are set in modern day Bunker Hill (what’s left of it), but inspired by Bunker Hill before it bit the dust. 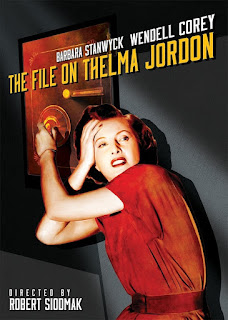 And to top the list off, a couple of Barbara Stanwyck noirs. She, of course, plays the ultimate femme fatale in the ultimate film noir, Double Indemnity. In The Strange Love of Martha Ivers – 1946 – she co-stars with Van Heflin, Lizabeth Scott and Kirk Douglas in his film debut. The File on Thelma Jordon – 1950 – is a companion to piece to that, at least in my mind. Something about Stanwyck’s aunts getting mysteriously dead in both movies. I like them both.

So, if you want to see dead aunts, LA’s infamous Bunker Hill, as opposed to that other one in Massachusetts, a hardboiled Mickey Rooney sans Judy and Lizabeth Scott at her most corrupt, check these out. This list barely scratches the surface but should give you start on making those hot, bright summer days just a little less bright.