by Leigh Lundin
Last week, I introduced Albert, the family pet alligator. People often ask if he ever bit anyone– just my youngest brother and he deserved it. It’s not nice for strangers (which my brother was then) to tease a baby dinosaur, especially constructed of armor and weaponry. Initially we treated his jaws and tail– part whip, part club– with respect, but gradually Albert grew used to us. He actually liked to cuddle with the alpha male of the house, but more on that in a minute.

Reptiles can go days, even weeks without eating, but when hungry, it’s not wise to stand between them and the drive-thru window. He wanted burgers and beer, but hamburger is too fatty and no one under 18 was allowed beer. On professional advice, we fed him ground horse meat supplemented with baby mice we occasionally discovered in the barns. His favorite treat was June bugs, which he ate like popcorn. We discovered he also liked cheese cubes, which we offered sparingly.

Dad obtained an industrial-strength plastic pan that he set behind the living room stove with an inch or so of water. The gator liked the living room. He’d doze in the sun behind my mother’s chair and, when he wanted food or to dump, he’d visit the pan. He became, you might say, litter box trained.

My freshman year of high school, I took part in a state speech competition. The contest was judged upon the number and variety of talks before local groups and television and radio.

I was a young mad scientist and I thought some topics were pretty boring, so I incorporated a robot I’d built into presentations. After the arrival of the alligator and, considering his surprisingly good behavior, I brought Albert along.

As it turned out, Albert won the boy’s division pretty much on his own. I went along for the ride, but I didn’t complain– lots of cute girls came up to visit with him and his brave, brave homie sidekick.

Albert Stars in a Play

Occasionally Albert visited school. During Show-and-Tell, he’d sit on the desk, one leg crossed over the other, and discuss logic and rhetoric. He won over faculty and students with smooth manners and sonnet readings.

Then came time for the school play. It was a dramatic comedy set in a spooky mansion. Miss Buchanan, recognizing fine talent when she saw it, invited Albert to star in the production and gave him credit in the school playbill. Because of Actors Equity rules, he didn’t get his share of lines but he garnered the longest laughs of any of us as he stalked my dramatic classmate Karen around the stage. Quite the applause hog he was.

Our reptilian lodger developed an attachment for my father. No, not the teeth-in-the-ankle kind of attachment, but a genuine liking. In his tiny brain, he adored my dad. Hey, I hear your eyeballs rolling from here, but Albert enjoyed being around my father. 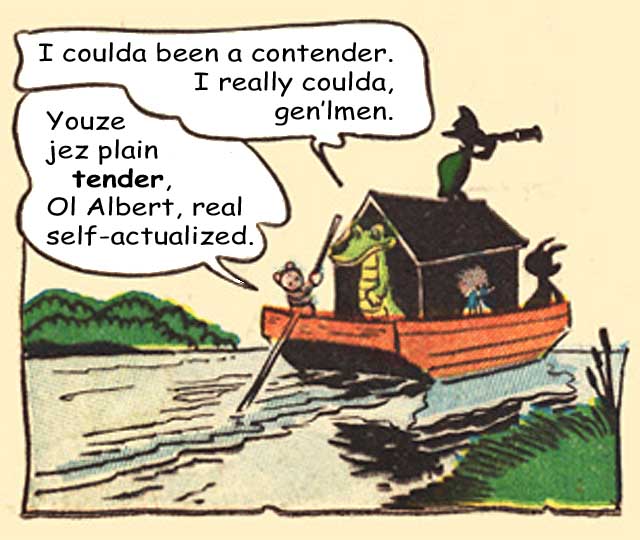 When Dad came into the living room to read, Albert noticed. Once Dad settled on the sofa or in the easy chair, Albert crawled over to Dad and rested his chin on the toe of Dad’s shoe.

Then up his shin until he rested his muzzle on Dad’s knee.

Albert would keep sliding up until he pressed his nose against Dad’s book or magazine. Finally he pushed so far up, Dad could no longer read. He would haul Albert onto his lap, roll him over and scratch his stomach, which was what the alligator wanted all along.

Albert and the Salesmen

My parents taught the alligator to come to their whistle. Really, truly. If Lauren Bacall wanted Albert, she could just put her lips together and blow. And Albert would arrive.

My mother posted a placard on the door that said ‘Beware of Alligator.’ From time to time a door-to-door salesman would arrive and remark how hilarious that was.

“Really?” said Mom. “You think that’s comical? Do I have to call the gator to get the message across?”

“Sure, sure, lady. That’s funny stuff. Listen, I’m here to tell you about new Amazo-Perq, the fabulous, fashionable, tasty tonic, scalp treatment, all-purpose cleaner, and gardening aid that comes with a free necktie and Fuller brush if you purchase tod— Jesus! What the hell’s that!”

Next week: Albert Takes a Vacation
Posted by Leigh Lundin at 00:00