A Wee Stroll in Auld Reekie

Last time I talked a bit about our recent trip to Scotland.  Well, actually I ranted about a mobile phone company I encountered there.  But I didn't spend all my time in Britain whining - or as they would say, whinging. 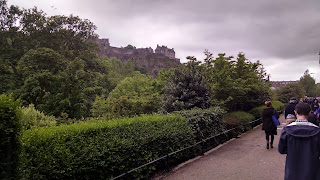 We visited one of my favorite cities; one that has plenty of crime and crime fiction in its history.  Edinburgh is the capital of Scotland (and, considering how the Scots felt about Brexit, it may be the capital of an independent country soon).

I visited the Writer's Museum, a 500 year old house now dedicated to exhibits on three writers with strong connections to Auld Reekie, as the city is known: Walter Scott, Robert Louis Stevenson,  and Robert Burns.  (I had no idea so many photographs of Stevenson existed, and he died a young man, too, long before the selfie stick.)

Outside the museum an enterprising Scot named Allan Foster had set up the starting point for a Book Lover's Tour.  I didn't have time to take it but it promised to show you sites connected to the three gentlemen above as well as Arthur Conan Doyle, Ian Rankin,  Alexander McCall Smith, Ian Rankin, J.M. Barrie, and J.K. Rowling.  (Rowling dreamed up Harry Potter in Portugal, by the way, although several Edinburgh cafes might like to claim credit.) 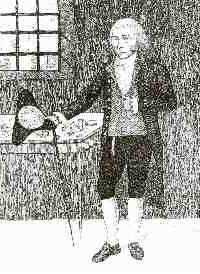 We managed to have a drink in Deacon Brodie's Tavern, whose walls are decorated with scenes from the life of  the city's most famous civil servant. William Brodie was a distinguished tradesman and member of the city council, right up until 1788 when he was revealed to be leading a gang of burglars.  He hung for his crimes, but the story doesn't end there.  Some of the furniture he built resided in the house where Robert Louis Stevenson grew up, which led to a fascination that inspired him to write Dr. Jekyll and Mr. Hyde.

But Brodie was probably not the city's most famous crook.  That honor belongs to  two Irishmen, William Burke and William Hare.  They are often remembered as grave-robbers, but that is a serious injustice.  It is true they provided the local medical school with cadavers for autopsy, but these entrepreneurs never sullied their hands in a graveyard.

Instead, they killed the potential corpses themselves, guaranteeing fresh product, which brought a better price.  Burke, who did the actual smothering, was hanged in 1829.  Hare gave state's evidence and got away uh, Scot free, as did Dr. Knox who apparently never noticed how fresh his subjects were.  (Oh, Burke was dissected.  Poetic justice.)

That same medical school featured, somewhat later, a professor named Dr. Joseph Bell, who taught diagnosis.  His uncanny ability to size a patient up at a glance made a big impression on one of his students, Arthur Conan Doyle, who transferred it to the world's first consulting detective.

And while it isn't technically about a crime, I can't imagine any mystery writer who wouldn't be interested in Real Mary King's Close.  This is a seventeenth century street that was covered over, more or less intact, during the plague, and  which you can now tour.  Educational and chilling.

Fun fact: the city of Edinburgh hired so-called "plague doctors" who were actually just men paid to take out the corpses.  The wise old city council offered very good salaries, since they expected most of the "doctors"to croak before they could collect.  However, the bizarre and bulky outfits the men wore to keep out the "bad air" they thought caused the plague were actually extremely efficient for keeping out the fleas that actually did.  So most of them lived till payday, much to their employers' consternation.  Proving, I suppose that management-labor relations have not changed much.

One more Edinburgh crime.   The city's Old Town rides on the spine of an extinct volcano.  At one end is the Castle, at the other is Holyrood Palace, the Queen's official residence in Scotland.  And it was there that we visited the very room where David Rizzio, the secretary of Mary, Queen of Scots, was murdered by her husband, Lord Darnley, and his followers.  A few months later Darnley left this world of trouble when the house he was sleeping in, also in Edinburgh, blew up.   Some say he was dead before the boom.  Some say his wife had a hand in it.

But we will have to give Mary the famous Scottish court verdict, Not Proven, which is said to mean "Not guilty, and don't do it again."

Those are some criminous highlights of Auld Reekie .Visiting it is something I do want to do again.
Posted by Robert Lopresti at 00:00