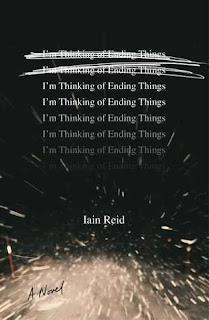 A few weeks back on his BOLO Books blog, my friend Kristopher Zgorski reviewed Iain Reid's debut novel, I'm Thinking of Ending Things, and I found myself drawn in immediately both by Kristopher's description of the book and by his own enthusiasm for it. As his review noted, the book is highly original, tough to classify cleanly with its mix of genre elements and literariness, and though little seems to happen in terms of how you might summarize the action here—a young couple talking during a car ride, a meet-the-parents family dinner, a visit to a Dairy Queen and then a stop by a local high school on the way out of town—the novel bristles start to finish with tension. As that tension picks up even more momentum, I found myself barreling through the pages, but Kristopher is spot-on too when he says the book deserves to be read more slowly; much of the conversation between that young couple centers on questions about relationships and identity with a mix of sharp insight and provocative questions that shouldn't be rushed past.

I'll admit that part of my continuing interest in the novel, at least while reading the first half of it, became loosely self-referential. Like my own book On the Road with Del & Louise—though with an entirely different tone—I'm Thinking of Ending Things is partly structured around two people on a journey and talking/reflecting about the state of their relationship, their past, their future. This novel had enough small echoes with my own that I enjoyed seeing where some artistic choices resonated, where others went in a different direction, the flexibility of storytelling in terms of style, structure, and more.

But I was also fascinated by other craft questions too—specifically one that Kristopher zeroed in on himself in his review:

When readers begin I’m Thinking of Ending Things it only take a few pages before a feeling of unease settles over the proceedings. Crime fiction fans are used to this, but typically it is possible to point to the reason for the disquieting feeling. With I’m Thinking of Ending Things, readers will have a harder time pinpointing the reason they feel that danger looms, but the impression is real and unstoppable. This sense of menace only increases as the pages are turned.


Late in the book, Reid himself inserts a bit of commentary about this very topic. The narrator—the unnamed girlfriend traveling with her new boyfriend Jake—occasionally offers small glimpses into her life before meeting Jake, and at one point she relates "the scariest thing that ever happened to me." I won't give away what that thing is—it's surprising in about equal measure to any conventional scariness—but I do want to quote the narrator's preface to the story:

Most people I tell don't find this story scary. They seem bored, almost disappointed when I get to the end. My story is not like a movie, I'll say. It's not heart-stopping or intense of blood-curdling or graphic or violent. No jump scares. To me these qualities aren't usually scary. Something that disorients, the unsettles what's taken for granted, something that disturbs and disrupts reality—that's scary.


This passage begins to describe what makes I'm Thinking of Ending Things so effective in creating unease and discomfort. While many of the reflections and conversations along the couple's road trip might seem perfectly normal—assessments about the state of the relationship, questions about meeting the parents ahead—abrupt deviations from what's expected, those disturbances or disruptions of reality, ripple with a sense of menace. (In many ways, I'm reminded here of some of the cocktail conversation in the early sections of Patricia Highsmith's Ripley Under Water, where sudden sharp turns in the conversation, ominous turns, are met so calmly by others—an underwhelmed response that ratchets up the sense that everything has suddenly shifted off-center here, everything is perilously close to toppling over completely, everyone is in danger.)

The beauty of I'm Thinking of Ending Things lies in that brilliant balance of the mundane and the menacing—and then by the questions that are raised every step of the way: What is really going on here? What are we glimpsing right there beneath the surface and when is it all going to come fully into focus? And then as the oddities begin to mount: Is the author really going to be able to pull this together? pull it off? Can he explain what seems increasingly inexplicable?

Reid seems aware of this too in that quote above, comments that resonate on the larger story being told: "Most people...seem bored, almost disappointed when I get to the end." (And maybe there's something prescient in that comment? There are nearly as many 1-star reviews as 5-star reviews for the book on Amazon, with the detractors almost uniformly focusing on the novel's payoff—or lack thereof.)

Endings are difficult, of course—as both readers and writers know. Several times lately, my wife has found herself engrossed in and amazed by books and then utterly let-down by the ending: Gillian Flynn's Gone Girl, Marisha Pessl's Night Film, Christopher J. Yates' Black Chalk. Some responsibility for that may rest on faults in the author's performance, but I think there's also something about the interplay between anticipation and resolution that gives priority to the former; maybe all endings, explaining things, closing things down, inherently risk greater disappointment. (At a fireworks display earlier in the week, our four-year-old son was nearly giddy asking about the "grand finale" we'd mentioned, that final bursting bursting bursting of so many fireworks at the end of the performance, but when it actually happened, his response was like, "That's it?")

I'm still not sure how I feel about the ending of I'm Thinking of Ending Things. Half of me immediately dismissed it as gimmicky—OK, more than half—especially with the author's own not-so-subtle nudge that we readers go back and reread the book again. And yet sitting here writing this, I find myself revisiting some of those earlier scenes with the knowledge of the trick here—and admiring anew those scenes through the lens of that knowledge.

Suffice it to say that the novel is 75% terrific in my estimation—heck, maybe 90%—with the balance let's-talk-about-it-when-you're-done-reading-it.

Even there, however, the fact that there's so much to talk about may provide testament to another aspect of the book's success.

I'm passing my copy along to my wife now—nudging her ahead, looking forward to her response.