by Leigh Lundin
Two weeks ago we told how Albert the Alligator came to live with a family in an Indiana farmhouse. Last week, we related his successes upon the stage and in public appearances. But, like many celebrities, Albert needed time away from his adoring fans.

Anyone could tell a teenage Albert was the product of a university environment. Each summer he’d clamor for the 5Bs: beach, babes, bikinis, beer and bratwurst. After intense negotiations, Dad compromised by giving him outdoor baths that the gator loved— hosed down then scrubbed belly and back with a stiff-bristled brush.

One day, Dad became distracted by a phone call. Never before had Albert shown any inclination to do a Kerouac, but when Dad returned, Albert was gone. Vanished. Poof. Without a trace.

My parents searched the yard, then the barnyard. The farm dogs, who hadn’t been trained to track overgrown reptiles, stood around looking bewildered and chatting among themselves. Like many teens, Albert failed to call home. My parents worried that if he returned, his little dinosaur arms weren’t long enough to reach the doorbell.

As evening approached, my parents had to admit the gator was decidedly missing.

The sheriff was known as a gossip, but my mother put aside her qualms and phoned his office, begging for discretion. Her concerns were this: An alligator in the house made them feel safe. See, knowledge that Mom and Dad kept a cold-blooded carnivore might have given a typical burglar or home invader pause. My parents felt his absence, both as a pet and as a guard dog.

Did I mention the sheriff wasn't known for discretion? Within two minutes, the sheriff issued an all-points bulletin, a BOLO:


Be on the lookout for a scaly renegade who answers to the name of Albert. Height between five and fifteen feet. Dark green, yellow eyes. Charming smile, big toothy grin. Known associates, the Lundin family and childhood friends. Subject is known to wear alligator shoes. Suspect is considered armed to the teeth and dangerous.

And as you might suspect, neighboring counties circulated the bulletin. Local newspapers picked up the story. A farmer in Hancock County called his sheriff to report an alligator had killed his sheep. A Shelby County rancher claimed a huge varmint– most probably a loose gator– had killed cattle and attacked his dogs. Word got out amongst door-to-door salesmen that pedlars known for wearing alligator belts and shoes had inexplicably disappeared without a trace. Talk started circulating about bringing in a professional tracker and hired gunslingers. 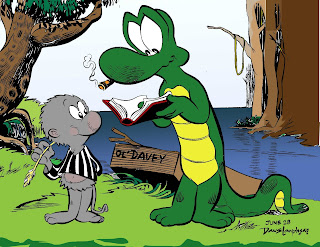 At that time, Albert was 40-inches long (a metre for you Pokémon Go participants) but about the diameter of the average cat, assuming either creature could be bribed to stand still long enough to apply a tape measure. Even by hitchhiking, Albert would have been hard-pressed to roam a dozen miles into Shelby County and another ten to Hancock.

Initially we fretted some hunter might shoot our Albert, but as the weeks dragged by, we guessed Albert had gone to ground. As autumn settled in, we grew concerned about winter, knowing Albert couldn’t survive a Midwestern freeze.

Our farm supported a small grove of fruit trees near the house. Sometimes Dad mowed the orchard and sometimes he didn’t. He’d neglected it that season but near the end of summer, he fired up the mower and attacked the tall grass between the trees.

Dad stopped the mower to pick up a thick branch and– you’re way ahead of me– it wasn’t a tree limb at all but Albert himself nestled deep in the high grass. The critter had dozed the entire summer no more than fifty feet from the house.

All parties celebrated the return of the prodigal son. Dad hugged the rascal and Mom cried. Albert croaked happily and asked about dinner. With Albert over 18, we broke out the champagne.

To be accurate, some ranchers still believed he stole a Dodge pickup truck to gallivant around in a tri-county crime spree slaughtering livestock, then sharing his ill-gotten ribs and roasts with hobos down by the railroad tracks. If so, nobody was talking.

The years passed. Kids moved out and moved on, and Albert stopped appearing in public. He gave up saloons and dance halls and even church picnics. Worse, Dad, his best pal, became terminally ill, slowly dying of a rare lung disease. Albert spent hours listening to an old song popular when he first came to live in the house.


A dragon lives forever but not so little boys.
Painted wings and giant rings make way for other toys.


One grey night it happened, his best friend came no more.
And Puff that mighty dragon, he ceased his fearless roar.

The now-grown children had long since dispersed, the rooms echoed emptily. Mom soldiered on, caring for the household. Albert felt bereft.


His head was bent in sorrow, green scales fell like rain,
Puff no longer went to play along the cherry lane.
Without his life-long friend, Puff could not be brave,
So Puff that mighty dragon sadly slipped into his cave.

That’s how he died. An old bedroom led off the living room, a cold, unheated chamber my parents used for storage since my departure. Mom had gone to and fro, fetching odds-and-ends with the door propped open. Unbeknownst to Mom, Albert crawled under the bed. He was still there when she closed the door. 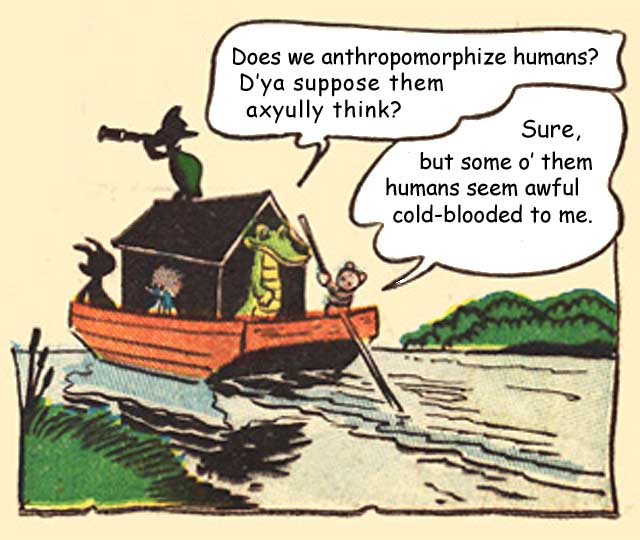 As a blizzard blanketed the region with snow, it took Mother a day or so to realize Albert had disappeared. Initially she wasn’t too worried… He occasionally hid behind the sofa when my father wasn’t around. He’d come out when he was hungry.

Except this time he didn’t.

In an echo of his first winter on the farm, Albert froze, only this time there would be no recovery, no artificial respiration, no heat lamps or restorative massages. Albert had joined his ancestors in that big bayou in the sky, that place where the days are always balmy and June bugs a’plenty await.
Posted by Leigh Lundin at 00:00