They are known by a variety of names, elegant like ‘evergreen’ or downmarket like ‘filler’ and ‘plugger’. However they are dubbed, these are useful columns and articles that have   long shelf lives. Good today, good tomorrow, good enough a year from now.

Sleuthsayer’s emergency columns are an example of the genre, and in an attempt to write something that will have a long literary shelf life, I recently thought of the Seven Deadly Sins. Sure, their heyday was probably six or seven hundred years ago, but look at it the other way, they were on the cutting edge of entertainment, morals, and religious thought for probably a millennia. And to be fair, what would mystery writers be without them? Of course times and fashions change. Our Victorian and Edwardian predecessors in the scribbling trades leaned heavily on greed. Heiresses were married for their money; wards were cheated out of their inheritances, and last wills and testaments attracted skullduggery of all kinds. The modern writer, by contrast, favors wrath, all the better to dispatch multiple victims, and lust, a super reliable motive. If they are not enough, greed is certainly good, although gluttony has gone quite out of fashion.

This is not to say that writers do not have a personal acquaintance with the deadly sins, but their general poverty probably keeps most of us from greed and gluttony, while pride, although a temptation, gets its regular comeuppance from editors’ rejections, readers’ resistance, and critics’ complaints. I think the  scribbling tribe must make do most times with envy – self explanatory – and sloth, ditto.

For a different view, go back six hundred years and check out the medieval literary landscape. There were different ideas and different concerns, but then as now, popular writers tried to produce the stories that their readers or listeners wanted and needed. To us, a procession of the Seven Deadly Sins – even accompanied by Despair, the worst of all – or a battle of vices and virtues like the ancient Castle of Perseverance sounds like a dull afternoon. Where are the gun battles, the car chases, the seduction scenes, and the moments of terror? 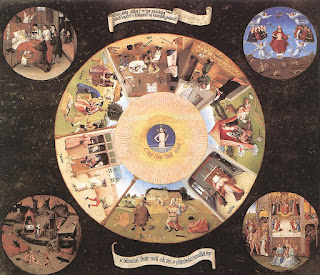 Nowhere in sight! A superman – or superwoman – saving the world or a persistent detective bringing a felon to justice would have seemed to the medieval audience an irrelevant distraction. Secular justice was not their concern – wise enough since it was often in short supply. What they wanted was to avoid hell, about which they had an all too clear notion, and reach heaven, which they figured had to be better than much of medieval life. They understood that their souls were the battleground between angels and devils, and the plays they watched and the stories they heard pointed the road to salvation.

Which did not mean that their stories and plays were sermons with costumes. The people who built the great cathedrals, illuminated the great manuscripts, designed the wonderful stained glass windows, and, incidentally, created fashions to die for whenever they had money, certainly knew how to put on a show. When you read that a favorite feature was fireworks-farting devils, I think you can see that spectacle, as well as salvation, was a necessity.

Looking back at plays and pageants featuring Pride, snooty and elaborately dressed; Wrath, red faced, bearing a club and no doubt mugging for the audience; Gluttony, fat and overfed and probably gnawing on a chicken leg, and the rest of the wicked crew, we see how a whole set of stories and characters flourished and then all but died. The battle between spiritual forces for the individual soul was replaced by struggles in the secular realm. The heroes of the old plays, Virtues like Fidelity, Chastity, and Mercy gave way to real men and women of less elevated character but more concern with righting wrongs within everyday society. 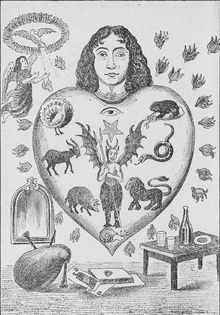 But, sad to say, Despair, that companion of the Seven Deadly Sins, suddenly seems more relevant than ever. In medieval theology, Despair, with its implied limitation of God’s grace, was the worst of sins. I used to think that curious and retrograde and psychologically unsound. No more. We don’t have to accept any theology at all to see that radical despair is a bad thing. What is it that drives people toward fanaticism, toward hatred, toward radical programs of destruction but despair? Not necessarily theological despair, but despair of society, of civilization, of humanity, itself.

I think no one can predict where literature will go next or what stories people will demand, but I am afraid that, just as the Seven Deadly Sins show up in contemporary disguises, Despair is going to feature prominently in our future.