But today I would like to give special attention to Anthony Trollope, that unbelievably prolific author, who for some reason has long been labelled a "serious", even dull author.  All I can say is that he had a wicked sense of humor, and understood - and wrote about - women better than any other Victorian author I've ever read.  Granted, his novels were the opposite of fanciful, set in the realities of middle-class and upper-middle-class Victorian life. Yet he used a lot of sensational material, including murder, arson, forgery (Orley Farm), theft, bigamy, and illegitimacy.  He did the most realistic portrait of a working prostitute (as a major character!) in The Vicar of Bullhampton that I've ever run across in Victorian literature.  So where did he get his reputation for respectability?  I have no idea...

Anyway, some of my favorite novels, which revolve around crime, are: 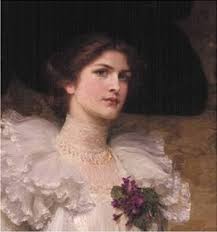 The Eustace Diamonds:   Lizzie Eustace, is a very shady Lady; she marries a baronet for his money and gets it all when he dies of consumption very early in the novel, including a fabulous diamond necklace that is the bone of contention between her and her husband's attorneys.  They say it's an heirloom, and belongs to the estate; she says possession is ALL of the law, and it's hers.  When the necklace is stolen, everybody is under suspicion, and the repercussions of the investigation range from the tragic to the hilarious.  (One of the great subplots of this, by the way, is Lizzie's suitors - a wealthy baronet's widow, no matter how scheming, is going to be sought after.  There's the Corsair, Lord George de Bruce Carruthers; Lord Fawn, who is only one minim of intelligence above Bertie Wooster; and her cousin, Frank Greystock, the standard strong-jawed Victorian hero; and the Reverend Emilius, the Victorian equivalent of a televangelist.  Don't count on knowing who will end up with whom...)

In the sequel, Phineas Redux, a hero from another novel, Phineas Finn, returns and is accused of murdering political rival Bonteen by bludgeoning him to death on a dark night (and you thought politics was dangerous today...).  But Lizzie Eustace is back (how I love that character!), and has parked herself with the victim's widow, where they condole and support each other until Lizzie's current husband turns out to be one of the other major suspects... 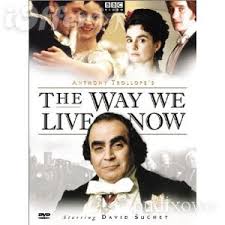 Moving from murder to high finance, there's The Way We Live Now, which is all about stock manipulation (mostly stock in railroads in Patagonia and elsewhere, all mythical, but the London pounds are real) by the masterly dastardly Augustus Melmotte.  Everyone is up to their neck in financial malfeasance, life is sweet, profits are high, and no one can understand what's wrong with it- until the whole thing comes crashing down.  This was made into (imho) an excellent PBS miniseries with a scenery-chewing David Suchet as Melmotte (which must have been a nice change for him after the tight-buttoned Poirot).

Besides crime, women, hunting, and politics, Trollope did madness and obsession frighteningly well:

The Reverend Josiah Crawley in The Last Chronicle of Barset.  A recurring character in the Barchester novels, Crawley is desperately poor, fiendishly proud, with a wife and children who are always on the verge of starvation, and for whom he will accept nothing in the way of charity.  In this novel, Crawley is accused of theft - and as the investigation goes on, he comes to believe that he may well have done it. 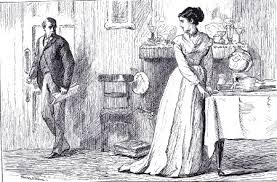 But Crawley has nothing on Louis Trevelyan in He Knew He Was Right who becomes so jealous of his wife - on such extremely insufficient grounds that Othello seems fairly reasonable - that he takes their baby away and flees to the continent.  Nor on Frank Kennedy, whose descent into madness is charted over two novels, Phineas Finn and Phineas Redux.  By the end of them, Mr. Kennedy has become a religious monomaniac who demands that his wife return simply so they can suffer together - and who tries to kill Phineas in the name of God and morality. And, just to prove that Trollope was no sexist, there is Mrs. O'Hara in An Eye for An Eye, who, when the dastardly Fred Neville seduces and does not marry her daughter, pushes him off a cliff.  (Yes, she goes insane afterwards, but personally I think she was just trying to avoid a hanging.)

So, for those of you who are looking for some old-fashioned crime and punishment and madness, check out Anthony Trollope - available in paperback and on Kindle.