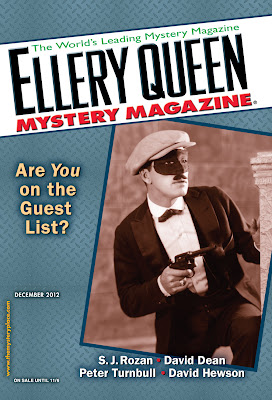 By the time you read this, my story "Mariel" should be out in the December issue of Ellery Queen Mystery Magazine. At least, I hope so as she, or it (the story), is the subject of my posting. I've written before that I've never found it necessary to make characters up out of whole cloth, as there are such an abundant number of inspirations running around. The character of my recurring clerical sleuth, Father Gregory Savartha, as I once posted during the final days of "Criminal Brief", is based on a wonderful priest with whom I was fortunate to have a friendship. The wise, dignified, and valorous Chief Julian Hall… well, I'm sure there's no need to explain where he was drawn from. But there have been many others… and Mariel is certainly one of them.

I once wrote to Janet Hutchings that I found the suburbs endlessly entertaining and fruitful ground for fiction. This was because she had just accepted a story of mine inspired (ever so loosely) on some neighbors with whom I had never spoken a word. The girl who provided the inspiration for Mariel comes from the same neighborhood, though her contributions to my creative process were more tangible. In fact, for a period of her young life, it seemed as if I was forever being made aware of her presence, either directly or indirectly. She had a way of appearing when you least expected it, and not being one to stand on ceremony, she never waited for an invitation. On more than one occasion, my neighbor two doors away awoke to find her sleeping on the couch in his living room. And he was sure that he had locked his doors. Being only eight years old, it was all rather troubling. It was only later that he deduced she had apparently discovered his emergency key (under a flower pot by the front door--first place burglars look). Clearly, the fact that she rarely spoke was not indicative of her abilities.

His was not the last house she visited during her leisure hours. My immediate neighbor to the north looked up from his computer one day to find her standing in the room with him. He said it scared the bejesus out of him. I should mention that she was not a conventionally attractive child, being quite large and heavy for her age. She also had an unblinking stare that could unnerve even the innocent. You can imagine what it did to the rest of us.

This little girl came from a family in crisis, which appears to be the state of about half the families in America these days. Her parents were involved in a stormy break-up and both had demons of their own to wrestle--they were not winning. She and her two brothers were the only kids in the entire neighborhood that had, during different stages of their development, ridden their bikes into my unmarked police car. Yes...each of them. Parked car...thank God. They were unhurt; the front quarter panel suffered only a little. These events were always timed to occur when I was at dinner and the car plainly in my sight at the curb. I'm convinced that this had somehow become a rite of passage. Oddly, I found the ritual itself pretty funny.

Once, when I was home during the day after a night shift, I witnessed her crossing my neighbor-to-the-south's back yard. He was away at work, as was his wife. Her body language was almost comical in its furtiveness. Just as she approached a shed on his property and began to open the door, I called out her name from behind a curtain, and in my best spectral voice intoned, "You don't belong there." She stepped back from the door as if burned, her Shirley Temple curls bouncing on her head. Surveying her surroundings carefully, she reversed course; returning the way she had come. Her expression was more troubled than frightened, containing a touch of stubbornness– she would be back, it said to me. Did I mention that she "collected" things left untended by her neighbors? "Untended" covered any unlocked door, or unsecured object. In this way she contributed to the security-mindedness of on our little street.

Though I did find a good bit of humor in her antics, it was the pathos of her situation that inspired me to write the story, "Mariel." It's completely fiction, of course. But the real Mariels of the world, sadly, are not. There are far too many feral children these days wandering the streets like wraiths–unsettling and terribly vulnerable.

I once responded to a call of two children found wandering– the little girl was three, and she was towing her year and half old brother along by the hand. When I arrived on the scene I recognized them from dealings with their parents– an alcoholic couple. I called for the youth and family services rep, and after turning them over to the bureaucracy developed to deal with such things, I went to their apartment. I found the father passed out on the couch, reeking of alcohol; the front slider open– the only way the children could have escaped. The mother was at work and we were alone. You might imagine the things that passed through my mind, having three kids of my own. I contemplated the many misfortunes that might befall such a person: He might resist arrest--many before him had done so. Or, he might flee through the closed half of the slider in his drunkenness. He might even fall down the concrete steps leading up to his porch being so unsteady on his feet. I thought a lot of things that could happen that morning… yes, it wasn't even lunch time, yet… but I didn't do them… I resisted temptation. And when I shook him awake all he could do was stare at me in bewilderment and fright. He didn't offer the least resistance and he was arrested "without incident," as cops say. In the end, I felt sorry for him, too; but not as sorry as I was for those kids, and way too many like them.

It's because of situations like that, and many, many more, that I wrote "Mariel," and why so many of my stories feature children dealing with adult situations. It's a tough world out there, and way too often, kids are left to go it alone. It rarely turns out well.
Posted by David Dean at 00:01