The regular contributors here at SleuthSayers have an on-line staging area where we can compose our articles, and then edit and tweak them before they are finally scheduled for publication.  There we each can see not only our own articles as they develop, but also the titles and publication dates for upcoming articles by other SleuthSayer contributors.  If you were to look at this collection of works in progress you would come away with some basic information about the various authors.  Principally you would note that some schedule articles way in advance – sometimes three or four are sitting in the queue, just waiting for 12:01 a.m. of their designated day to arrive so they can strut and fret their day in the sun.

That, my friends, is not me.  I usually spend the days just before my every other Tuesday posting looking (sometimes frantically) for an idea that will grow into an article.  I mention all of this because I am going to be battling some challenges over the next few months.

Let us back up.  My wife Pat and I live in Washington, D.C.  Summers are nice here.  Not so winters.  January is depressing enough, but February – no matter that it only has 28 days – is the longest month of the year.  So we decided years ago that if we were lucky enough to celebrate early retirements (which we did in 2009) we would absent ourselves from Washington every winter for as many weeks as possible.  Lucky for us we have adult sons who can be left behind to take care of the house and the cats.

All of this leads up to the fact that this is being written in early January, but by the time it is posted, on January 17, we will already be six days into a three week trip, including two weeks on board the tall ship Royal Clipper, sailing from Barbados to the leeward islands and then down to the Grenadines.  We have other less grand southerly sojourns scheduled for February and March, but more on those later.

Whenever we head south in January I try to go armed not only with a good deal of reading material (made easier now that I read almost exclusively on my Nook, which tucks nicely into carry-on luggage) but with a plot outline as well.  So my hope is to make the trip a bit productive.  .

Even though I am every bit as retired at home as I am abroad, I still seem better able to adhere to the discipline of writing when we are away.  The Royal Clipper works well for this – while it is a sailing ship, it is very well equipped, and has a nicely appointed library where I can find a desk for my laptop.  There I follow Ian Fleming’s model – I write for an hour or two and then take the rest of the day off.

Thinking of Ian Fleming brings to mind authors who have retreated to the Caribbean not only for inspiration but also in search of a conducive place to write.  Fleming, famously, wrote all of his James Bond novels at Goldeneye, his vacation home in Jamaica.  He refused to write any fiction elsewhere.  It was at Goldeneye that he died of a heart attack in 1964, just after finishing the first draft of The Man with the Golden Gun.

On at least one occasion Agatha Christie also sought out the Caribbean for literary stimulation and found there  the inspiration for A Caribbean Mystery, as the above dedication indicates.  Apparently she was looking for something of a jump start when she headed to the West Indies.  Christie had received lukewarm reviews for her previous two novels, The Mirror Crack’d  and The Clocks.  The jinx was broken with A Caribbean Mystery, however.  In its December 11, 1964 review of the novel The Guardian  noted


"Mrs Agatha Christie has done it again. In A Caribbean Mystery she tells the reader explicitly what is going to happen; and yet when it does, nine out of ten will be taken completely by surprise – as I was. How does she do it? For the rest, it is Miss Marple this time who is in charge of the story; and all one can guess is that the setting is a Caribbean island." 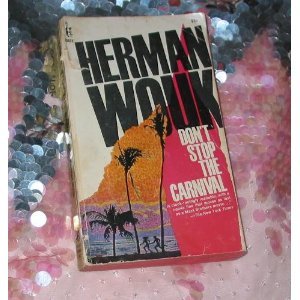 Herman Wouk also went south for the inspiration for his cautionary serio-comedic classic Don’t Stop the Carnival.  The novel tells the story of the hopeless and hapless Norman Paperman, who deserts the bright lights of Broadway to purchase and then attempt to run a small hotel on the imagined Island of Kinja (short for “King George Island").  The book inspired a musical by Jimmy Buffett (sound track highly recommended) and on a more personal note provided the name for our cat, Kinja, who is wandering around my ankles as I type.  The model for Norman Paperman's Gull Reef Hotel in the book was the Royal Mail Inn, now long gone, but which was once was located on Hassell Island in St. Thomas across from Charlotte Amalie, and which Wouk managed for a short time in the early 1960s.  While it can be hard to find Don’t Stop the Carnival in State-side bookstores (and the book has yet to come out in an e-publication) you will find it everywhere in the Caribbean – even in convenience stores.  In the Caribbean it is the ex-patriot’s Bible.

Who else can we add to the list?  Certainly Graham Greene, who wrote Our Man in Havana after a prolonged visit to Cuba.  And The Comedians, one of the finest novels I have read and a brilliant and scathing send-up of the Duvalier government, was written by Greene following his numerous visits to Haiti.  Reportedly the owner of Hotel Oloffson in Port-au-Prince, where Greene frequently stayed, named a room in his honor.

I do not know for certain that the late Swedish author Stieg Larsson frequented the Caribbean, but I suspect that he must have as evidenced by the beginning section of the second book of the Lisbeth Salander trilogy, The Girl who Played with Fire.  There, in a rather strange stand-alone prologue to the book, Salander has traveled down the leeward islands until she reaches Grenada, where we find her, at the beginning of the book,  lounging on Grand Anse beach -- surely one of the finest beaches in the Caribbean. The descriptions of Grenada there, and in the action that follows before the actual book kicks in, are wonderful, and ring true.  Certainly Larsson must have walked Grand Anse himself before he allowed his greatest creation, Lisbeth, to do so.

We can also add to the list James Michener, who returned frequently to the Caribbean and who lived for some months on the island of  St. Lucia, which is the counterpart for his fictional island of All Saints in his 1989 novel Caribbean.

St. Lucia is also where I will be on the day this article posts.  I should make it to Grenada and Grand Anse the next week. This list of authors who have retreated to the West Indies could go on, but I need to pack!