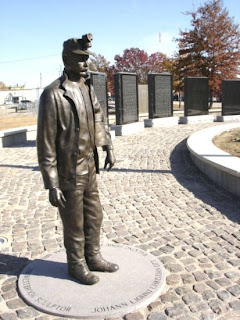 I was recently in Pittsburg, Kansas, a former coal mining town on the flat and featureless Kansas prairie. The weather was hot, the cloudless blue sky immense, and the small lakes and ponds, remnants of old-time strip mining, occasionally dubious. This is the southeast corner of the state, the "Bleeding Kansas" of the run-up to the Civil War, when what we would today call "war lords" harassed folk who didn't share their political opinions and all too often killed them.

The immense Kansas plains struck me as a landscape demanding inner resources, especially during the torrid summers and the cold, windy winters. There are few places to hide on those vast grasslands, and trouble approaches from far off in a cloud of dust. A perfect place, one would say, given its history of political, and later, labor, unrest, for the mystery writer.

And yet, where are the frontier mysteries or the mysteries of the coal fields? To the best of my knowledge, nowhere to be found. And nearer to home in my own neck of the woods, mysteries set in Colonial times or around the first contacts with the Algonquins and the Narragansetts are thin on the ground. All those good witch trials might have gone unheard as far as the genre is concerned, while the chicanery surrounding early land claims and land deals, in itself a gold mine, is the province of the archivist, not the novelist. 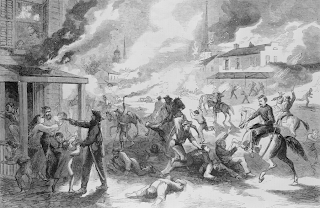 The neglect of the Colonial period and of what seem to be tempting places like rural Kansas makes a nice illustration of the way that books are made from other books. Nowhere is this clearer than in the mystery genre. Thanks to Sherlock Holmes, gaslight London, and in a pinch, gaslight New York, are so favored we might still be living with belle epoch fixtures. How we love the railroads (see Andrew Martin's charming novels with rail road detective Jim Springer) and the complications of the class system, and the endless difficulties of would-be independent women (try John Fowles' The French Lieutenant's Woman).

The Victorian period is another favorite, as writers continue to prospect in terrain first mined by Wilkie Collins, Charles Dickens, Sheridan Le Fanu, and their colleagues, all of whom found pay dirt in inheritance disputes, female oppression, and false identities. As a result, the UK, especially England, is still favored as the Victorian venue; Anne Perry's Thomas Pitt and William Monk mysteries come to mind.

It might have been otherwise, but our very own Edgar Allan Poe put his detective in Paris, and Poe's psychological dramas are set in the all purpose kingdom of the Gothic, with bows to Mrs. Radcliffe and "Monk" Lewis. The distinctive properties of the United States for mystery were tapped by the much less popular Charles Brockden Brown, whose weird and convoluted novels did not provide so happy, or so easily-followed, a template.

Our side of the Atlantic only came into its own, speaking of mysteries, with the twentieth century. Prohibition gave a big boost to mystery, as well as to crime, with bootleggers and drinking clubs, G-men, and the rise of the Mob with a capital M. As alcohol became criminal and public morals became flexible, the private detective, formerly associated with the Pinkertons, strike-breaking, and low company, morphed into a new, populist type of hero.

Helped, no doubt, by the rapid-fire patter of the movies, smart-mouthed detectives and their witty female companions pranced off the page and into the collective consciousness. Dashiell Hammett's Sam Spade and Raymond Chandler's Philip Marlowe have proved irresistible models, while James M. Cain set the template for a tidal wave of pulp fiction. Retro forties style detective novels are still selling (see the Hard Case Crime series) and any number of smart, irreverent guys and gals are still paying the bills for their creators on the page and on the tube.

Sure, other historical eras have had their day. James Lincoln Warren and Steven Saylor have sent their sleuths to ancient Rome and classical Greece. Ellis Peters did wonders for medieval detection, and the Renaissance has its proponents, too. But in almost every case, the mystery follows where earlier literature has tread. "Write what you know," say the teaching gurus. And nine times out of ten, that also means, "Write what you've read" and what the public has come to expect.

So are those hot, open plains, former mine sites, and tiny rural towns teetering on the verge of extinction out of my range? Probably. I can see a lot of work, a lot of reading, and a good deal of imagination required for a novel. But the Jayhawkers and Bushwackers of the Civil War, not to mention the polyglot miners and the womenfolk of the "Amazon Army" have a definite appeal.

I think I hear the library calling, and perhaps a short story isn't out of the question.
Posted by Janice Law at 00:01